The number of regions of the 40 largest OpenSim grids went down this month for the first time since July, from 15,623 to 13,069, a loss of over 2,300 regions, a result of a long-overdue housekeeping on OSGrid. But the big story wasÂ from Avination, which rocked to second place this month.

How to grow your grid

Raising prices and advertising on the radio might sound like unusual marketing strategies for an OpenSim grid, but they certainly worked for Avination.

Avination tripled in size since mid-January, growing from 324 regions to 925 over the past month. The number of users also grew nearly three-fold, from 3,083 to 11,977.

According to grid owner Melanie Thielker, an OpenSim core developer and CEO of OpenSim hosting companyÂ 3D Hosting, the grid held a number of promotional campaigns, including running radio commercials in Oregon and on the west coast. The commercials also aired on Web radio and in-world radio stations in Second Life, she added.

The grid also raised land rental prices, from $40 to $60 per region per month.

There was “a feeding frenzy” when the price increase was announced, Thielker told Hypergrid Business. There was one night, just before the increase went into effect, where customers bought 140 regions.

Listen to the commercial here:Â JMAN_Productions_AviNation_50sec_Final_1

In many ways, Avination is similar to InWorldz, which also saw rapid growth late last summer. Both grids are closed, commercial grids — no hypergrid teleports in and out, no region OAR file exports or inventory IAR file exports, no self-hosted regions, and no “God powers” for users. All of these restrictions mean that content theft, while not impossible, is very difficult for the average user. As a result, Avination – like InWorldz before it — has become a magnet for Second Life merchants looking for expansion opportunities but who worry about copyright protection. You can see a list of some of the brand names that have expanded to Avination here.

But Avination also has unique brand positioning. Unlike InWorldz, which markets itself as a general-purpose social grid, Avination is designed specifically for role-playing. For example, the grid offer free health meters for all users, and offers the CCS combat system, popular in Second Life, as a $15 a month extra add-on service for region owners.

“Second Life was fun but it went in directions I didn’t like,” Thielker said. “IÂ was powerless to do anything about it.Â Then I happened to find OpenSim and that was my ticket to a virtualÂ life I can enjoy.Â On the way, I help others build their worlds and they help me with mine.”

In late January, OSGrid purged more than 4,500 regions. It has since regained around 1,300 of those regions — if not for the cleaning, OSGrid would again have been the biggest gainer of new regions in the OpenSim universe.

According toÂ OSGrid administrator Dave Coyle, the grid had to purge such a high number of regions because the grid hadn’t cleared out dead regions in several months.

The previous such cleaning was in the middle of the summer.

The non-profit OSGrid, which is dedicated to developing and testing the OpenSim software, allows people to connect regions they run on their home computers, or regions located on third-party servers.

This results in extremely low costs for would-be land owners — a region hosted on a home computer is free, since the OpenSim software itself is free. Regions hosted by third-party providers such as New Voice or YourSimSpot Â start at around $10 a month. (Full list of OpenSim hosting providers here.) 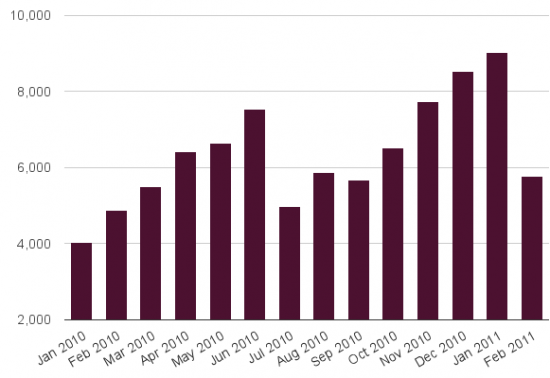 With self-hosted regions, when the computer running the software is turned off, the region goes down.

OSGrid remembers that region, however, and when the owners start the computer up again, the region returns to its previous location.

But OSGrid has had a number of growing pains over the past few months, with downtime during upgrades, and hypergrid connection issues. Each time this happens, a certain proportion of users decide to abandon their OSGrid regions and switch to running hypergrid-enabled standalones, or join another grid.

Other users simply get tired of their regions, or put up new ones in different locations on the map.

Eventually, the OSGrid administrators remove the placeholders for the abandoned regions, opening up their slots so that other people can use them.

No actual assets are lost in the process, since OSGrid does not store the contents of regions, just their locations. The contents of the regions are on the servers or home computers that host them, and if their owners want to reactivate them, they can do so at any time. They might just have to find a new spot on the map to put them, if their old spot had been snapped up in the interim.

Another surprise this month was that OSGrid sank to third place in the number of new user accounts that were created.

The other surprise was in the number of users who were active on the grid during the past month.

Will all these new users on Avination stick around, or did they just drop in out of curiosity and leave again? Will OSGrid regain its mojo? Will InWorldz continue its steady growth or level off? We’ll see next month.

The main site for OpenSim downloads, OpenSimulator.org, does not currently track the number of times the software is downloaded. In addition, there is no central registration system for grids. As a result, there is currently no way to find out how many grids are out there running OpenSim.

However, there is one distribution of OpenSim where the number of downloads is tracked — the popular, easy-to-use Diva Distro.

The Diva Distro is a quick way to create a four-region mini-grid, where the four regions are grouped together into a megaregion — meaning no border crossing issues for avatars. The Diva Distro is also, by default, hypergrid-enabled. As a result, it has become popular with schools and small groups, as well as individuals looking for a quick way to set up a small, private world.

As of this month, the Diva Distro has been downloaded a total of 4,234 times, an increase of 527 downloads since the same time last month.

This does not necessarily mean that there are 527 new OpenSim mini-grids in the metaverse. Many people download the software but never set up the grid. Meanwhile, other people may download the software once but use it to set up several grids. For example, the Diva Distro is used in Ener Hax’s popular Sim-on-a-Stick download, which creates a virtual world that can be carried around on a USB stick.

Second Life gained 139 regions since mid-January, for a new total of 31,552 regions, reversing a downward trend. The company lost regions during five of the previous six months, according to data from Grid Survey.

However, this was the smallest increase in more than a year.

This month, we also contacted the grid owners of all the active grids to get some information about what the grids are all about. We asked about the maturity level of the grid, whether it’s hypergrid-enabled, whether it allows self-hosted regions, what payment system is available, and what languages are spoken on the grid.

The results are here:Â List of public OpenSim grids

We are now tracking a total of 118 different publicly-accessible grids, 72 of which reported their region counts this month. The raw data for this monthâ€™s report is here.