Getting attention in a virtual world

By: Maria Korolov
In: Maria's Worlds
With: 3 Comments

A few days ago, I heard a brief talk by marketing expert Steve Harrison in which he talked about how to get attention for your message.

It turns out he was speaking about how to get the attention of journalists and news producers, so, being a journalist, I was curious about what advice he was offering. He said we journalists are all buried under press releases and emails from sources and don’t have time to pay attention to each pitch.

And he suggested an exercise. He asked people to get a piece of paper and a pen. I happened to have both handy. Then he asked his viewers to write down five names — just the first names — of people who had contacted them that week.

And my mind went blank. I could see my in-box — stuffed full of emails from sources and PR people. (My day job is writing feature stories about technology for major national tech publications.)

Finally, I remembered my sister had texted me. Eventually, I filled out the list with family and employees — and just one person I’d talked to for a recent article. 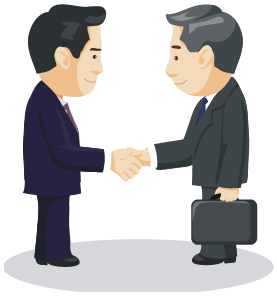 Harrison gave a couple of minutes for people to finish writing, then he asked us to look over the list.

“Put a check mark next to each person you’ve personally met face-to-face at least once,” he said. “Now how many people on your list are people you’ve met personally?”

“You’re more likely to remember people you’ve met,” he said. “When you meet people, they get top-of-mind status.”

Now Harrison was speaking about physical meetings — it turns out he’s promoting a conference at which sources can meet journalists. But I was surprised to realize that my virtual world contacts are stored in the part of my brain I reserve for people I know personally — not in the section of brain allocated to people I talk to on the phone or communicate with by email.

What does this mean for PR and marketing?

It means that it pays to give journalists virtual tours of your facility, your product, or even a presentation room where an executive walks them past PowerPoint slides.

And, by extension, it pays to give customers similar tours.

I’ve toured a lot of physical facilities in my time — mostly boring ones, programming shops and call centers, but a couple of manufacturing facilities and one port. The memories are as vivid as those of virtual tours of company offices — offices are offices, equally boring.

Except the shipping port — that was in Singapore, and it was way cool. And except for the ThinkBalm virtual world vendor tour, which was designed to look more like a factory.

In the past, I’ve critized companies whose idea of a virtual meeting is to walk me around a plain room and show me screens of PowerPoint slides.

What was the point? They might as well just have emailed me the slides, I thought, or sent me a Web link, and saved me the effort of downloading and installing their viewer, creating the avatar, and logging in.

But I may have been wrong about that. I still remember walking around that empty room and starting at the PowerPoint screens. And, yes, I remember being annoyed about it. But I also remember the content of the conversations — and I remember that I met the executives. I do dozens of interviews a week. I take a lot of notes on each one because I can’t remember them ten minutes after I hang up the phone. But I remember that meeting.

It reminds me of when I worked at Computerworld, during the dot-com boom about a decade or so back. I worked out of the Framingham office, and most of my job was on the telephone, with an occasional trip to attend a conference. But one vendor insisted on meeting me in person and a couple of guys showed up at the newsroom to explain their technology to me. I still remember sitting in the conference room and getting their presentation. I was impressed that they had taken the time to come out and see me.

I still get regular offers to meet up with vendors, but I’m rarely in the mood to drive an hour and a half to get to Boston — or take a three-hour train trip to New York. And I just don’t have the time. And there’s no budget anymore for longer trip.

Virtual meetings could address both the time constraints and the budget issues.

In the book The Invisible Gorilla two psychology professors –Christopher Chabris and Daniel Simons — explain that our brains don’t work by recording everything they experience, like most people believe. Instead, they record little snippets of what happened and then when you recall the memory, they fill in all the blanks.

That’s why I have a memory of drinking coffee at a Folk Cafe get-together on GermanGrid. Even though, since the event was virtual, I obviously did not drink anything at all.

And why I have a memory of water spray hitting my body while wind surfing… at Club One island in Second Life.

More insight into how this works came out today, as USC researchers reported that our brains store physical sensations, and then replay them when we see something that reminds us of the sensation.

It may also tie into something researchers are calling the Proteus Effect. If you have an avatar that you identify with — it looks like you, and you can move it around and speak through it — then you are affected in real life when something happens to that avatar in the virtual world.

How to do it: the good, the bad, and the evil

Obviously, this technology can be used for evil, by marketers and employers manipulating customers and employees into particular behaviors by setting up situations in which their avatars act in certain ways.

I’m sure corporations are paying very close attention to the research being done by Stanford’s Virtual Human Interaction Lab.

And there are also bad ways to do this. I may have retained more memories of my virtual tour of a vendor’s offices — but I was annoyed at having to go into the world. Overall, it was probably a wash for that vendor, as far as influencing my opinion of them.

A virtual environment should offer something extra, something a visitor can’t get in a simple phone call or Web presentation.

In the real world, that something extra is usually food — journalists are bribed to attend events by the promise of snacks. It’s remarkable how much this motivates people to show up, even when they don’t particularly want the food that’s offered!

Vendors at trade conferences bribe potential customers to come visit their booths by offering free pens and other cheap trinkets.

But the best vendors used to bribe with experiences — concerts, amusement park rides, meetings with famous people, even an ocean cruise.

Virtual world vendors can also offer unique experiences to reward customers for coming to a virtual meeting or event. For people new to virtual worlds even simple hot air balloon rides can create powerful memories. And the muted sense of danger from being up high in a virtual sky can help create bonds lead to future relationships — without the risks involved of a real-world hot air balloon ride.

And, if the virtual environment sits inside a larger universe — Second Life, for example, or the hypergrid — then visitors can also be bribed with virtual swag — T-shirts, caps, laser pointers, frisbees. But why stop at little trinkets? For little or no additional price, companies can give away more substantial, and useful objects — ships, cars, in-world productivity tools, roulette wheels, anything that can be fun or useful and can have a corporate logo slapped on it.

And don’t forget the food and drink. The vittles may be virtual, but the memory of it will feel real and your visitors will get a warm and fuzzy feeling — without the extra calories.