By: Press Release
In: Briefs, News
With: 2 Comments 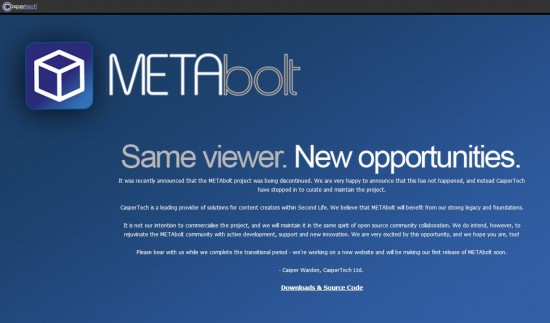 “It was recently announced that the METAbolt project was being discontinued,” said Warden in the announcement. “We are very happy to announce that this has not happened, and instead CasperTech have stepped in to curate and maintain the project.”

The viewer will remain an open source project, he said, and the company does not plan to commercialize it.

METAbolt is a non-graphical, text-only viewer for Second Life and OpenSim. It designed to be used in situations of low bandwidth and on machines which do not have the processing capability to run a full viewer. It can also be used to run “bots” — automated systems that provide in-world customer service, security, or group invites.

Irana Pey reviewed the viewer at length a couple of years ago for Living in a Modemworld.

Be Nice! - 10/20/2021
Twelfth Annual OpenSim Grid Survey
In the light of zero evidence, I suggest you refrain from such unnecessary jabs. No need for that!

Alexsandro Pomposelli - 10/20/2021
Despite risks, AviTron is now accepting cryptocurrency payments
Well but the article is about AviTron. I have specified above how to deal with Bitcoin or any other currencies volatility. AviTron also uses PayPal, third party merchant account allowing people to...