Summer events on the OpenSim grids

By: Maria Korolov
With: 8 Comments

OpenSim grids are gearing up for the 4th of July and other summer events this coming month.

OSgrid, the world’s most popular non-profit OpenSim grid, is having its seventh birthday celebration this month.

The event will be held on July 26 and 27, and two 512-meter-square variable regions have been created for it â€” a land area equivalent to eight standard regions.Â The event regions are located east and west of the Events Plaza region, and are called OSG7BE and OSG7BW.

And this video of Hylee Becker’s “Quantum Express” exhibit on OSG7BE:

Subscribe to Key Gruin’sÂ YouTube channel or to the OSgrid Google Plus community to keep up with more videos and birthday-related announcements.

Littlefield celebrates the 4th with a bang

Littlefield Grid is known for its holiday parties, and this month is no exception. Littlefield’s 4th of July celebrations begin at 9 p.m. Pacific at the Stonehaven Party Isle, with a live DJ, dancing, food, drinks, a swimming pool, a log flume ride and other attractions, and a fireworks display at midnight Pacific.

As always, the events are accessible via the hypergrid, atÂ lfgrid.com:8002:Stonehaven Party Isle.

They include a building contest with entries ranging from a cookout area to a presidential visit, as well as a generous response from creators for gifts for the maze hunt.

There will also be DJ’d parties featuring country hoe-down music, old rock, and everything in between.

“Throughout the week, everyone is planning on bogeying down,” Call said.

On the final day of the festivities, July 4, the winners of the building contest will be announced and will get cash prizes. There will also be a fireworks display.

Steam expo on Tangle Grid — now on the hypergrid

This year’s Steampunk Expo on Tangle Grid is hypergrid-enabled, and has been extended through to July 6.

Residents of grids running the latest version of OpenSim can use either of these, since the bug that prevented long-distance teleports wasÂ fixed last fall.

“We have decided to go hypergrid enabled,” Kling told Hypergrid Business. “[But] only a few regions have been placed on gate travel.”

Once arrived on Tangle Grid, steampunk aficionados should do a local teleport to the event region, Steam Isle Event Ground. 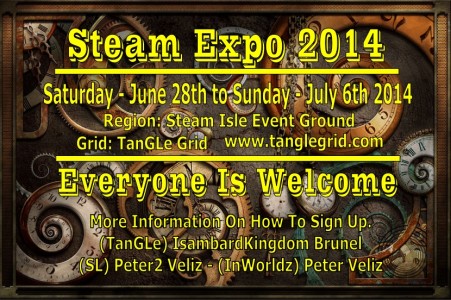 Originally scheduled just for Saturday, June 28, the Expo now continues through the first week of July, with a live DJ at noon Pacific on Sunday,Â June 29, Tuesday, July 1, and Friday, the 4th of July.

Hypergrid Safari sets off every Wednesday

They meet every Wednesday at noon Pacific time on the Magica region on OSgrid, hypergrid addressÂ hg.osgrid.org:80:Magica.

“EveryÂ WednesdayÂ in July we will be visiting different grids and builders, from Kitely to Sanctuary to FrancoGrid,” group founder Thirza Ember told Hypergrid Business. “We try to combine visiting installs and galleries with a Q&A with long timeÂ OpenSimÂ users and creators — we had a great visit with Lani Global a couple of weeks back, for example.”

On Wednesday, July 30, I will be leading a Hypergrid Safari tour and we’ll be stopping at the newly-redesigned Hyperica hyperport.

Kitely — the largest commercial grid by land area and the fifth most popular grid by active users — is continuing to build up its in-world events.

Check out the Kitely Community Calendar for all the details.

The Kitely Market has added some new items, including animated birds from Ocean EngineeringÂ and creature avatars from Avatar Bizarre.

However, overall, the number of products listed on the Kitely Market has fallen slightly over the past two weeks, fromÂ 2,882 toÂ 2,860. The number of variations of those products has increased, however, fromÂ 5,459 toÂ 5,498.

“We lost a couple or merchants following our pricing change but we gained more merchants over that same time period,” Kitely CEO Ilan Tochner told Hypergrid Business. He was referring to the June 11 decision to stop offering metered regions to free users.Â “We had a net growth in the number of product variations while experiencing a small decrease in the number of product listings due to the fact that the merchants who left listed mostly single-variation products while the merchants that joined listed more multi-variation products.”

The most significant change was in the number of exportable variations, which fell from 2,254 to 2,158.

“It appears that most of the new merchants have yet to make their new listings exportable,” said Tochner. “I expect that will change once they start getting requests from the hypergrid users who buy from Kitely Market.”

“We decided that we are going to record the voice meetings and publish them on our website as podcasts for people to download and listen to again, as a way of promoting the grid, and also to improve awareness and interest,” grid owner Justin Ireman told Hypergrid Business.

The grid has also recently upgraded its website, its version of OpenSim, upgraded the capacity of its voice server, became a supporter ofÂ the OpenSim Community Conference, added a new custom-built “Tiki Pool” to its Avalonia Sea party island, and posted a YouTube video demonstrating how to purchase items on the Kitely Market for delivery to the Avalonia Estate grid.

For more adult-oriented events, check out The Adult Metaverse Google Plus community.

Many grids have calendars showcasing their events. If your gridâ€™s calendar isnâ€™t in this list, please send an email toÂ [email protected].

Also check out the Hypergrid EventsÂ and OpenSim Virtual communities on Google Plus!

Latest posts by Maria Korolov (see all)
2014-06-29
Previous Post: 5 reasons people don’t buy from your website
Next Post: Please look for these two things next time you’re in a freebie store