From the very start of my educational consultancy over seven years ago, I have always trusted my gut instinct in business. I have always worked in the innovation field, often years before others, trialling and testing â€˜proof of conceptâ€™ ideas, no matter how outlandish, to probe those boundaries.

Over the course of this last year I have also been looking at issues of identity surrounding working and learning online and particularly the work of Yishay Moor and Shirley Williams with occasional glances over at what Josie Fraser is up to. Unlike Second Life, ReactionGrid allows you to choose an avatar with your real name. So my curiosity was triggered.

When I joined Erica Driverâ€™s Linkedin group and saw the title of the event â€˜How to write an immersive technology business caseâ€˜ (this coupled with the fact that I have recently confirmed the imminent launch of a business partnership with someone who has been working in allied fields for years in gaming and broadcast) I just had to go.

On arriving at ThinkBalm island in avatar form I was immediately launched into a highly focused brainstorming event facilitated by Erica and Sam. In the company of about 20 highly energised people with far more expertise in this area than I will ever have, I was given a masterclass in business writing techniques. This all through the medium of Jeff Loweâ€™s BrainBoard tool which has the facility to save all comments and ideas written on it in the form of notes to a database and email. 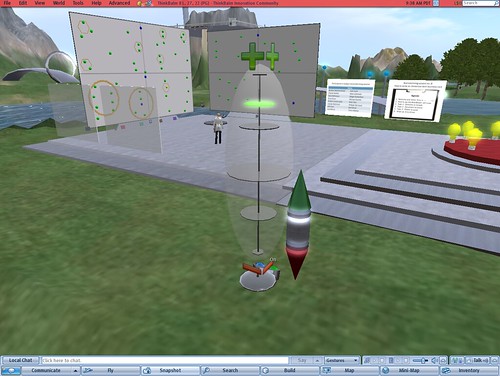 Image attribution to Jeff Lowe on Flickr under this CC licence

The hour went quickly and was a marvellous use of the platform and the interactions orchestrated within it. I would say it was an excellent case study in how to use this medium to best advantage. At the end of the session opinions were garnered in Jeffâ€™s Attitudometer (touch the green top if you are in agreement about a question or statement, red if you arenâ€™t and the middle if you have a neutral opinion). Itâ€™s an instantÂ  feedback aggregation visualiser – simple and efficient.

So what do I draw down from this first experience of the business community in an immersive environmental platform and what can education learn from this?

Well, all of the participants were highly motivated self-starters who werenâ€™t afraid of taking risks – very similar to many of the teachers I have met at various TeachMeets. And like them they are working in highly distributed small pockets of communities outside of main institutions bound together by their passion for learning.

These business models of working, at their best, seem very efficient and unencumbered by the usual barriers to productivity. There is fluency and focus, especially in the business community and it is able to fasttrack, prototype and instantiate ideas quickly and act on them with similar speed. I have also seen several similar instances of effective distributed work models on Tom Barrettâ€™s blog.

But educators are necessarily wary of business; there has not been a good track record between the two communities in the UK especially – many teachers have felt disempowered and locked in to big corporate IT structures underpinning what they do and for the most part putting blocks on innovative practice. The rise of mobile device ownership in those communities in particular is beginning to change that and especially the use of Twitter for professional development. But a lot of what I have seen in both communities in the last year has led me to believe much cross-fertilisation is possible.

What marks true north, as well, in both communities, is the use of real world â€˜face to faceâ€™ meetups to build genuine social community and those relationships then help pump prime subsequent distributed virtual gatherings on numerous platforms. The models are very similar – they seem to fit well.

I do think at some point there will be a merging of the two with each being able to give value to the other. Teachers like Viki A Davies and Trevor Meister both of whom are also on ReactionGrid are starting to pave the way. But more of them in my next blog post.

I personally believe that the role of educators will start to evolve and that many will begin to use the creativity and drive that underpins entrepreneurial enterprise in their professional practice and vice versa. The best of both communities will have a lot to teach each other.

But for now the map is very much equivalent to the one at the start of this post – the Mappa Mundi and the social systems and frameworks that surround the building of 21st Century working very much mired in the same conditions that underwrote the Medieval world before the coming of the printing press and Caxton. Who knows what will happen in the next decade but itâ€™s fun trying to see what may pan out.

(This is a condensed version of an article originally published at Learn 4 Life.)

Leon Cych
Leon Cych is the director of Learn4Life, an e-learning consulting firm that works in the area of innovation in education using Web 2.0 applications. It was established to document and model new technologies and systems of working in education in the UK. It broadcasts digital video interviews with innovative practitioners and thought leaders as well as demonstrating and reflecting on the emerging use of Virtual worlds in education.

Latest posts by Leon Cych (see all)
2009-08-30
Previous Post: Race for a Web viewer is on
Next Post: The Virtual Event Debrief