Looking to add some jazz to your virtual world? Say, by having doors that swing open when you touch them, fish that swim in your lakes, or cannons that actually fire?

Sure, you can buy all this stuff, but if you’re a do-it-yourselfer kind of guy or gal, pick up a free script instead. To create scripts in OpenSim, open your inventory (tab on bottom left if you’re using an older viewer, or the suitcase tab if you’re using a newer viewer such as Firestorm) and select Create-New Script. Then just paste in the script, save it, rename it, and drop it on top of the object you want to animate. A rotating door script, for example, would be added to the door itself, or to its hinge (depending on the script and shape of door). 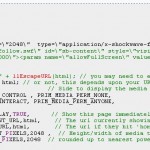 Almost all Second Life scripts work as-is in OpenSim, though there are some vehicle physics commands that haven’t been implemented yet. In addition, OpenSim has added some new commands, called OSSL, and can also run scripts written in C#. (List of OSSL functions is here.)

LSL isn’t the easiest language to just sit down and start writing code in if you’ve never programmed before. But by playing with these scripts, you can soon get the hang of it.

OSGrid’s Script List: This is a list of scripts that have been posted to the OSGrid forum, the go-to-place for OpenSim discussions of all kinds. As the largest grid on the hypergrid, OSGrid is the crossroad of the metaverse, and even folks who live on other grids frequently pop in for help or to just to chat.

Internet LSL Script Database & Library: More than 700 scripts, nicely arranged by category. This site gets lots of traffic, and Ferd Frederix, the guy who runs it, responds to questions and comments.

FoxSan’s LSL Script Repository: Just over 150 scripts available. Use the search box — or the tags — on the right to find what you’re looking for.

The Script Shack: A low-traffic forum, with a small selection of scripts for doors, menus, and for helping merchants.

Digigrids: A collection of free game-related scripts for OpenSim

None of these have what you need?

Instantly generate a new script with the Script Me! LSL script generator.

A super easy-to-use Web-based scripting tool that uses visual building blocks is Greenbush Lab’s ScripTastic, which we recommend highly, especially for kids. (But adults can try it out to, particularly those just learning how to script.)

For more advanced users, MiceOnABeam offers a downloadable application that helps scripts build with a visual interface, available in both free and paid pro versions.

You can also instantly create a new particle generator script with the Free LSL Particles System from Zeja Pyle.

There is also a program called Scratch for Second Life that you can download and run to generate more complex scripts with an easy graphical interface.

Or work your way through Second Life’s excellent collection of scripting tutorials.