By: Maria Korolov
In: Features
With: 0 Comments

The hypergrid economy continued its steady growth this past month, with a total of 1,091,000 OMC (US $3,775) spent on the 14 OMC-enabled grids since the multi-grid currency launched in March. This total doesn’t include local grid currencies, CyberCoinBank’s G$, or Virtual Wallet’s V$, none of which report their transaction numbers.

This is a tiny number when compared to the millions spent in Second Life, an indication of the early stage of development of the multi-grid OpenSim economy.

The total amount of OMC currency in circulation also continued its steady growth this month, reaching a record high today of 322,100 OMC (US$ 1,115).

The next most popular currency, G$ from CyberCoinBank, defines itself as a “fictional currency” that is not convertible, though there are third-parties who may be willing to buy the currency back from you. Currently, the currency is accepted at some locations in Avatar Hangout, in Second Life, on the AnSky grid, in InWorldz (which also has its own grid-wide currency), in Alpha Towne, in Virtual Highway, in Meta7 and on OSGrid.

Both G$ and OMC are very new entrants to the game, and were created as a result of the emergence of hypergrid travel between OpenSim.

The OMC currency was launched in March with four grids, but has quickly been gaining adherents because it’s backed by an established company, has the most secure infrastructure of any multi-grid currency, and is guaranteed convertible by the backers. Parent company Virwox has been around for three years, and trades over US$1 million in Linden Dollars each month.

However, the number of transactions conducted in the previous month has fallen off during the summer, possibly a combination of seasonal factors, and internal restructuring by the two major OMC-using grids, Grid4Us and GermanGrid.

In addition, we’ve seen a drop off in hypergrid travel recently because of a major upgrade of the OpenSim software. Though the upgrade will make hypergrid travel more secure, only a few grids have upgraded yet. As a result, travelers can’t go from grids running the older software to grids running the new release — and the most active OMC grids are also the ones who upgraded first, so now nobody can get to them unless they create an account and login directly. 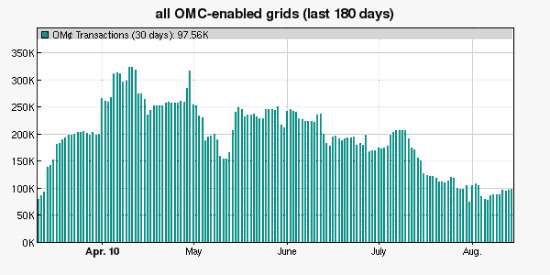 Number of total transactions during the previous 30 days has recently started to rebound after a downhill slide earlier this summer. (Source: Virwox.)

A couple of people have talked to me — in private — about setting up sin sims. You know — sex, gambling. Smoking too, probably. All the vices.

As a mother of young children I’m… well, actually, I don’t care. My kids watch TV. As a business journalist, though, I know that there’s nothing quite like sex to sell a new technology platform. VHS tapes? Check. Internet? Check.

OpenSim sex providers will probably prefer to work in private grids, so they can up and move the servers whenever they feel like it — or when the authorities start breathing down their necks. They’ll probably want to be on the hypergrid, to make it as easy as possible for new users to visit. And they’ll probably have some sections restricted to grid residence — and charge a fee for access.

The question is, are they going to want to use their own currencies or multi-grid ones? If they have their own currencies, then they get to make money on the initial sale of the currency, and on every transaction after that — but it may limit their pool of potential customers. In addition, they’ll have to deal with all the hassles of being a virtual bank.

With OMC, the potential pool of customers is even larger, the security and tracking features are better, the company behind it has a longer track record, the currency is fully redeemable, and there’s nothing stopping people from reselling the currency at a markup — but the infrastructure for setting up virtual “banks” isn’t there.

Either currency system is fine with it being used for adult content.

“In Europe, we have a more relaxed attitude towards adult services — and gambling, sports betting, etc… — than in the U.S.,” said Frank Kappe, a professor at the Institute for Information Systems and Computer Media at Austria’s Graz University of Technology, and one of the creators of the OMC.

“There is no ‘acceptable use policy’ for the currency as of now, and I do not see a reason there should be,” he told Hypergrid Business.

The way OMC works is that each grid has to be individually approved by Virwox, to ensure that hackers don’t set up pirate grids to steal money from users.

Then the grid administrators get an OMC module that has to be installed into the server of each region that will be using the OMC currency.

“It very much replicates the usability of the Second Life currency,” Kappe said. This means that the user balance shows up at the top right of the viewer screen, and all the standard LSL shopping scripts works as they do in Second Life.

There is no charge for individual transations. Virwox makes its money from a small commission fee when the OMC is converted to or from dollars or Euros.

Grid4Us and GermanGrid were among the grids that launched the OMC back in March, and account for the bulk of the transaction since then.

The other grids are still in the process of rolling out the currency and setting up shopping areas. One, FrancoGrid, a non-profit, plans to use it only for donations and tip jars.

This past month, however, the two German grids have been undergoing a merger, under which Grid4Us would be folded into GermanGrid. In addition, the two grids adopted the cutting-edge 0.7 release of OpenSim and Hypergrid 1.5, making them incompatible to the rest of the OpenSim universe and inaccessible by teleport.