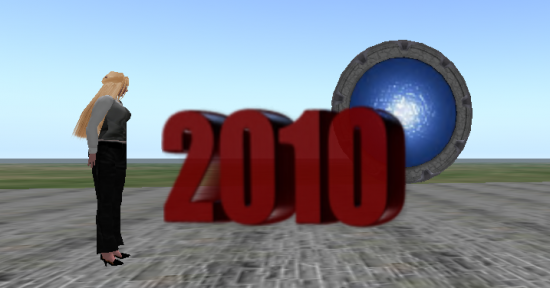 In January of 2010, I made a few predictions about what I thought was going to happen with OpenSim this year. I was way off on most of them.

The OpenSim developers will continue to call it “alpha software”

This one, I got right. They’re still calling it “alpha software. OpenSim is still missing some high-end vehicle physics functions, and while the Whisper voice system sounds as good as Second Life’s Vivox voice, it isn’t in common use yet on any OpenSim grid and isn’t completely integrated with the viewer software.

OpenSim will get a Web viewer

Yup, the Canvas viewer from Tipodean is out — at least for testing — and it looks great. Meanwhile, the folks at Rezzable have their own Web-based viewer, for the Heritage Key grid. Neither is available yet for public general-purpose use, however.

OpenSim will hold more than 100 avatars in a location

Intel was able to get over 1,000 avatars on a single region this past summer. This technology isn’t in wide release yet, though. And most of those 1,000 avatars had to log in through a separate interface that limited what they were able to do. As a result, this technology is a good fit for large events, where most of the attendees will be passive participants and will not be building anything or moving furniture around.

Functionality will continue to move into objects

I was expecting that a light-weight, no-frills Web-based viewer will inspire designers to create in-world objects that duplicate the functions you’d normally see built into a viewer. For example, instead of having a built-in inventory, you’d use a virtual closet from a third-party provider. But lightweight viewers will have to get into widespread use, first.

The ecosystem of OpenSim designers and developers will continue to grow

This prediction has absolutely come true this year. We’ve seen substantial growth in freebies — including those of the legitimate, legally licensed variety — as well as growth in the number of OpenSim hosting and service providers. Competition has already brought the price of a single rental region to $9.90 a month.

Mesh imports will shake things up for the better

We have mesh imports on test grids in both Second Life and OpenSim, but they’re not supported yet by any big public grids or by the standard viewers, so no shaking going on — yet.

Business and personal avatars will separate

I was expecting school and corporate uses of OpenSim to grow to the point that people would routinely start having two separate avatars — one for work, and one for personal use — the same way that they now have separate work and personal emails. Instead, continuing difficulties with hypergrid teleports have forced people to have many avatars — one for each grid that they spend time on. As a result, multiple avatars are a practical decision, not a result of a need to keep personal and work lives separate.

The backlash against enterprise users of virtual worlds will grow

I haven’t seen any backlash against enterprise users of virtual worlds. Except for the now-routine warnings that OpenSim is still alpha software, I haven’t noticed any attempts to keep schools or corporations from moving to OpenSim. Instead, there seems to be a widespread recognition that enteprise users are more willing to spend money on content licenses, hosting, and support — and thus contribute to the growth of the OpenSim ecosystem. Their money helps push development forward, and everybody benefits.

This is one prediction I’m happy to have gotten wrong.

I was expecting to see the first signs of virtual business this year. Not virtual retail business, like clothing designers, or service companies like OpenSim hosts and developers. But scalable, world-changing business — the equivalents of Amazon, Yahoo, and Google. They may well be out there. One of the many new grids springing up could well evolve into, say, the next Amazon, and I know of several players who are hoping to ride the coming virtual wave to an IPO. I’m not quite ready to place my bets just yet, though.

OpenSim will continue to move ahead of Second Life in functionality

For enterprise users, OpenSim has, in fact, surpassed Second Life this year in many respects. The ability to export and import OAR (region backup) files is a big deal for companies and schools. So are IAR (inventory archive) exports. We’ve also seen the emergence of region management panels this year, where OpenSim hosting companies provide self-serve region administration tools for their customers. Finally, hypergrid teleports allow users to attend meetings, networking events, or go shopping on multiple grids. This year, hypergrid teleports have become more secure and more reliable, though the recent fragmentation of OpenSim grids by software version has made travel more difficult. However, for the most part, OpenSim developers have continued to stick close to Second Life in terms of feature sets. For example, they rolled out media-on-a-prim shortly after Linden Lab did. The reason is that OpenSim is still tied to the Second Life viewers — and because incompatible licenses prevent viewer developers and OpenSim developers from working closely together to create new, OpenSim-specific features.

Looks like I scored with just four of my ten predictions — that OpenSim is still officially “alpha software,” that the OpenSim ecosystem continues to grow, that we have a Web viewer, and that we have 1,000 avatars on a region. And the last two of those predictions are still in the testing stage.

For the most part, it looks as though I was overly optimistic about the pace of development of OpenSim.

Despite that, I have to say that I am still barely keeping up with what’s happening in OpenSim. The growth in private grids, the interest from educators, and the money flowing in from donors and investors has been inspiring.

2011 promises to be a very interesting year.