Can you draw a hypergate?

By: Maria Korolov
With: 17 Comments

There are a lot of stargates floating around OpenSim. Most are copies of one of the gates that show up in the StarGate movies or television shows.

Others areÂ unrecognizableÂ as gates — they’reÂ disguisedÂ as teleport boards, spinning globes, and weird shapes. After all, a hypergate is just a script — it can be attached to any object.

To make life easier for travelers I suggest that we, as a community, come up with a common hypergate design and distribute it under a Creative Commons license — allowing any region or grid owner to put up something that looks recognizeably as a gate, doesn’t infringe on anyone’s copyright, but can also be modified to match the grid’s or region’s look and feel.

Some pictures of existing hypergates: 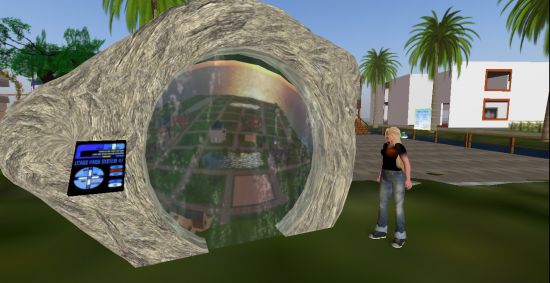 A hypergate on the Festa 24H region on OSGrid, part of the Oliveira Grid Portal network.

If you come up with a design, post it on Flickr, set it to a “Creative Commons” license, and post a link in the comments. Flickr doesn’t seem to have a “Like” button for its images, otherwise we could do a quick poll right there.

What I will do is pick my favorite design — or two — and add in all the hypergate scripting, and set them up as a freebie on my grid, and post it up to OpenSim Creations as part of a Hyperica OAR file. I can also donate working copies to a couple of freebie distribution centers on OSGrid, and post downloadable versions here on this site, as well as the individual scripting components that went into it.

Folks can just take the gate, put it on their region, set the destination, and use it. After checking with their hosting provider that they’re fully hypergrid enabled, of course.

I personally like having single-destination gates because you don’t have to mess around with dialing up the destination you want. Half the time those scripts aren’t working for some reason, anyway. A single-destination walk-through gate is simple, no mess no fuss, and anyone can use it.

Another option — though I haven’t seen this in use anywhere yet — is to have a gate with a handful of possible destinations as simple buttons across the top or side. You click a destination to highlight it, then step through the gate to go there. Most multi-destination grids today use menus to dial the gate, which can be a little awkward to use. I’ll try to make a gate like that, as well, plus a gate that can automatically pull destinations from the Hyperica website (thanks to Paul Emery for those scripts!).

Snoots Dwagon - 11/26/2022
2022 OpenSim grid survey
I appreciate Balpien's comment is because it brings to light a major shift in Opensim concept. Either people are becoming increasingly apathetic about this particular report (and thus not...

AviTron Metaverse - 11/25/2022
2022 OpenSim grid survey
Whoever said I’m greedy needs to get a reality check. No other grid spends more money investing on its community than AviTron. Over 2000 free 1/4 sims have been given out. Free trons$ stipend given...

AviTron Metaverse - 11/23/2022
OpenSim prices drop to lowest average ever, under $13 per month
My opinion is a little different but I think the main reason most top/commercial opensim grids will shut down one day is the lack of funds. People need to realize that these top commercial grids...