By: Maria Korolov
In: Maria's Worlds
With: 11 Comments

It’s been years in the making. Literally. I’ve been slowly collecting scripts and destinations — with the help of a lot of other folks — and Hyperica is finally open for business.

Here’s how it works.

There are three regions.

Teleport in to whichever one is closest to where you are. If you’re on JokaydiaGrid or Island Oasis, teleport to Hyperica Lower. 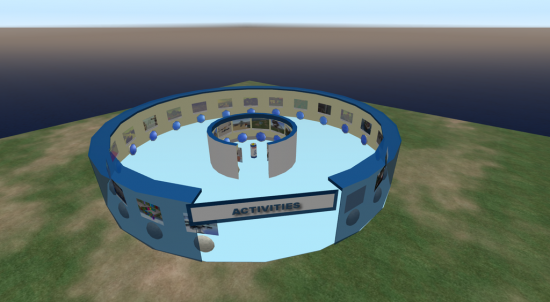 There are four terminals on each region. One, labeled “Main Grids” takes you to the welcome regions of the 30 major grids on the hypergrid.

Another terminal is for shopping and freebie destinations, the third is for education destinations, and the fourth is for art and culture and activities.

To teleport to the gate’s destination, you can walk through the gate, or just click on it. Be careful not to bump into gates — the teleport are instantaneous! I can’t count the times I accidentally teleported myself somewhere when working on this.

The fun part is what happens when you’re at Hyperica Lower and want to get to a grid in the upper regions. There’s a bug in the viewer (inherited from Second Life) that keeps folks from being able to teleport more than 4096 regions in any direction.

The Hyperica gates are set up in series. If the destination is too far away, the first gate will automatically send you to an intermediary region first, and the gate there will propel you on to the next gate.

So you walk through just one gate — or click just once — and you’re sent through relay gates until you’re finally at your destination.

For this to work, all the gates have to be perfectly aligned and ready to play their relay role. I can see plenty of opportunities for failure here, say if an intermediary gate is busy or out of commission for some reason. Overtime, we’ll work these kinks out. 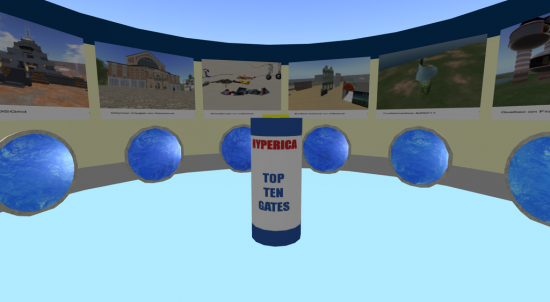 The gates are automatically updated from the Hyperica website. It’s not real time — if you vote a destination up or down, it won’t be reflected in the Hyperica hyperport until I stop by and hit a reset button to reload all the gates.

In the future, I might set it up to update automatically every so often.

Next, there’s a list of destinations to add to the Hyperica directory, and existing destinations that need to be updated. The Wilder Westen grid, for example, has been merged with Open Neuland and all its hypergrid addresses have changed.

Another thing I’m going to do is put up billboards at the hyperport promoting fun destinations. If anyone wants to put up a billboard, email me — [email protected] We’re not charging for them right now, and probably won’t for a long time, until the traffic is there to warrant it.

Meanwhile, I encourage grid owners, merchants, anyone who wants hypergrid visitors, to contact me about setting up billboards, kiosks, little mini-stores — the kind of things you see in a normal airport.

And there’s also one big piece of functionality I want to build, an events directory and a live calendar. The events coming up right away will be promoted right in the center of each of the Hyperica regions, so folks can stop by at any time and see what’s going on. And, of course, click and teleport right over.

I’ll be posting the hypergate scripts so anyone who wants to set up anything similar will have a starting point.

Kazuko Yoshida - 5/1/2021
Gloebit payments still down in yet another protracted outage
Personally I worry about how big a Share AWS has these days Seems to me they are HUGE and cannot handle the responsibility of their Size I am seeing alot of issues these days with AWS vunerability and...

JayR Cela - 5/1/2021
Gloebit payments still down in yet another protracted outage
I believe we will be dropping Gloebit on the 3RG this week, at least that's what I have heard.

Maria Korolov - 4/30/2021
Gloebit payments still down in yet another protracted outage
I've been asking Chris for follow-up details and he hasn't been responding. If he doesn't get back to me in a week or so, I'm going to do a survey of all the grid owners about what they're planning...

Luna Lunaria - 4/30/2021
Gloebit payments still down in yet another protracted outage
Ok so that's it? Gloebit just dies quietly without commentary or outrage - a financial exchange that merchants, performers, and multiple grids depended on? Doesn't even merit a follow-up article on...