By: Maria Korolov
With: 12 Comments

Say you and your friends want to set up a self-serve system to post announcements on each other’s grids or sims?

Here’s how to do it without having to create any databases, by using Google Spreadsheets.

First, you go to Google Docs and choose Create – Form.

Here’s a sample form, which you can use to submit event announcements for Hyperica billboards:Â http://www.hyperica.com/add-new-event/

I created the form in Google Docs, then embedded it into my website by asking Google for the embed code, and just pasting it into a blog post, the same way you would embed a YouTube video.

My form asks for things like the event name and date, an image URL, the hypergrid address, and a website address.

This new sheet filtered all the events, to show just the ones that I haven’t happened yet.

Here is my formula:

Then I created a third sheet, where I would sort all the events chronologically — so that the event that will happen next is listed first.

Here is my formula:

You’re going to get an extra row at the end with the row headings. I don’t know how to get rid of that! Also, there might be a way to combine these two formulas into one, but just putting one inside the other didn’t work for me. But maybe I was doing it wrong.

Anyway, now, on the third sheet, you have just what you want — upcoming events, sorted in chronological order. But you could sort them in any other way you want, too. For example, if people pay you for these announcements, you could sort them by how much they’ve paid. Or you can filter based on what grid the events are on, or whether the event is free or costs money.

Then I went in-world and created an object on which to display an event.

It’s actually a flattened cube — I have the size set to X=1.8, Y=2.2, and Z=0.01. Then I have Taper set to X=0.40. That gives me a little strip at the top, a little strip at the bottom, and a wide area in the middle for the event’s image. You can adjust the tapering settings if you don’t want either of the strips — or you can make your billboard be just the image itself — and just have it do a teleport if you click on it.

(I had to change the file type to a .TXT file to upload it.)

It pulls the bottom buttons from a texture that needs to be placed inside the object and named “Grid-Website buttons.” If you rename the texture, just edit the script to use the new name.

The way my script works is that you edit the first row to tell the script which event to display — the first event, the second event, etc… The reason I did it this way was to set up a big announcement board showing the next six events: 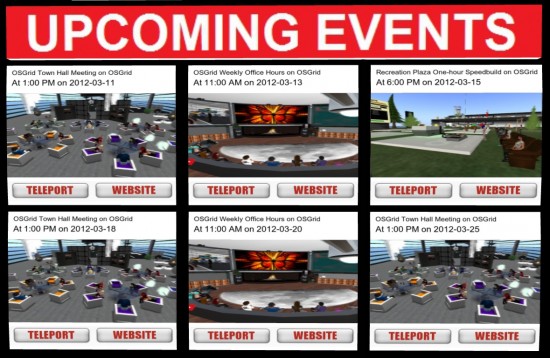 But you could also use it to show a random announcement, instead, as in this ad below: 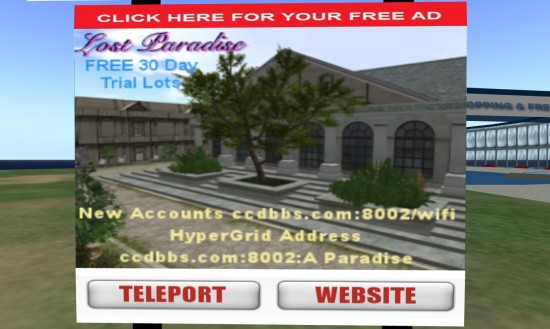 Here, if you’re the owner, and you click on the middle image, it pulls in a new random ad from the spreadsheet — where the submissions aren’t ordered or filtered at all. Clicking on the top red panel takes you to the website where you can submit your own, free, Hyperica ad. (Feel free to do that.)

Here, I added a second texture to the object, “Click here for your free ad” to put in the top panel. Then I adjusted the image orientation and stretching manually so it would fit right.

It pulls in the data from the spreadsheet, counts up the number of rows, and picks a random row to use. If you wanted to, you could add columns to give a particular weight to particular ads, and adjust the randomness calculation to bring up the weighted ads more often.

You could also take out the top and bottom panels, and just have a teleport function if someone clicks on the ad.

And it’s not just for ad billboards — you could also use this to display announcements simultaneously in multiple locations around your grid — use a timer to refresh the display on a set interval to keep the displays up-to-date.

Remember to make your Google Form public access if you want outsiders to add their own listings, or keep it private if you’re just going to manage it yourself. You will also need to make the spreadsheet public — the particular sheet you’re using for your script — and get its URL and update the script accordingly.

You can get more detailed information about how to pull data from a Google SpreadsheetÂ in my previous article.

Latest posts by Maria Korolov (see all)
2012-03-10
Previous Post: The hypergrid is a social web
Next Post: 6 cheap ways to market your virtual business