In 2008 and 2009 I spoke at conferences and webinars about the use of Second Life for corporate eLearning as anÂ easy-to-useÂ 3D animation application. â€œEasyâ€ is a relative term to true 3D animation applications such asÂ BlenderÂ andÂ 3ds MaxÂ (formerlyÂ 3D Studio Max).Â The typical corporate eLearning department often does not have the budget for true 3D animators nor the hardware for video rendering (such as aÂ render farm).

Creating video in this manner using Sim-on-a-Stick is not ideal because some eLearning videos need a cast of characters for branched scenarios. However, it is a viable way to build sets for use in eLearning videos and â€œsetsâ€ are the example Iâ€™ll illustrate here.

Last year, I had a chance to use Sim-on-a-Stick for a project ideally suited for a portable OpenSim deployment. A marketing company was looking for a way to have their sales team create 3D images of product placement in cinema lobbies. In responding to their clientâ€™s proposals, they would have an advantage by providing images from multiple angles and perhaps even videos of their clientâ€™s products. Product placement includes anything from a self-service kiosk to exhibit-style booths showcasing a new product or service with reverse spotlights showing product logos on the walls or floors.

They needed to be able to respond to proposals (RFPs) as quickly as possible because the first response typicallyÂ wins the business. OpenSim was not my first thought for this; GoogleÂ SketchUpÂ was my initial choice because of the ability to use a ray tracer such asÂ KerkytheaÂ to create photo-realistic renders. Part of the project requirements included training them on the tool and this tipped the scale toward OpenSim. I have done Sim-on-a-Stick workshops and was confident that I could train them in a day on how to set up product displays, import appropriate textures, snap quality photographs, and even do videos of the space.

The deliverables were ten cinema lobbies from each of ten U.S. metropolitan areas to be accurate in dimension and appearance (laser surveyed and CAD-based with photos of each venueâ€™s textures), 30 standard display items (booths, tables, chairs, banners, etc), and training. Training included how to set up premade display items, import and apply textures to the display components, lighting and snapshot settings, using aÂ Space NavigatorÂ withÂ FrapsÂ and WindowsÂ Movie MakerÂ to create video, and saving OARs.

Sim-on-a-Stick allows for each lobby to be stored as an OAR file with each proposal response to also be archived for reference or future use (for example, an iPad 2 roll out in Manhattan theatres could be re-purposed for an iPad 3 event).

The images you see in this post were proposal images and are not depicting a real cinema lobby. The images do show a hypothetical HP display in which the two reverse spotlights on the floor and one spotlight on the ceiling were animated, a feature not possible had this solution been done in Google SketchUp. The lower polygon count of OpenSim was an acceptable quality compromise for the ability to script movement and to â€œflyâ€ a camera real-time through the space (no need for overnight rendering which means faster RFP response time). 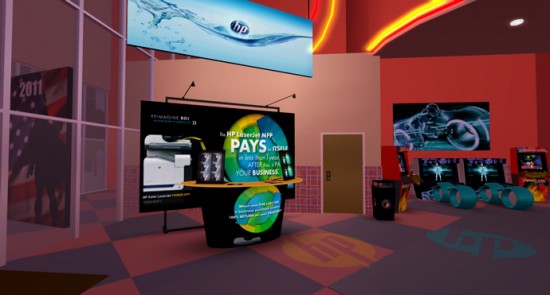 (This column adapted with permission from subQuark the blog.)

David Miller
David Miller is eLearning developer at Newmarket International. He is an educator, writer, virtual content creator and social networker at subQuark. He is currently developing a workbook-based environmental science program for students. He is combining his education, teaching experience, eLearning skills, virtual world expertise, and conference presentations with a 642-acre virtual world to create 3D virtual field trips with a special emphasis addressing the gender gap in STEM careers.