By: Lemuel V. Cacho
With: 2 Comments

Students learning to drive in Vermont are getting an edge on their written exams thanks to an online tutorial with animation filmed inside Second Life.

Vermont’s Department of Motor Vehicles reported this month that would-be drivers passed their written tests significantly more often after it deployed a virtual tutorial created by Designing Digitally, Inc. The platform has been in use for a year and half.

â€œYoung people learn more when they are involved with a learning process that is interesting and fun,â€ said DMV Commissioner Robert Ide Â in a press release. “This has proven to be the case. Since its launch a year and a half ago, the DMV has seen a dramatic increase in the number of individuals demonstrating they have the knowledge required to pass the DMVâ€™s written exam. Prior to the availability of this tutorial, 55% of those individuals who took the DMV written test passed. The pass rate now exceeds 75%. The popularity of the DriveVermont tutorial is also evidenced by the fact it is receiving well over 3,000 visits each month.â€ 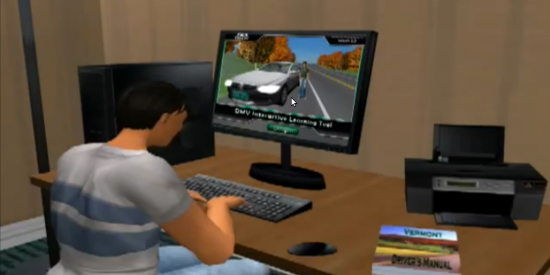 The system was built in 2008 and 2009 and the development team at Designing Digitally used Second Life to do the videos for the module, company president Andy Hughes, told Hypergrid Business. They purchased a private sim and had around six of their employees build machinima videos. From there, the development team created the videos and assets based on detailed storyboards.

“We wanted to find a cost effective way to do 3D animation for a traditional Adobe Flash based e-learning module and found that Second Life lent itself to that,” said Hughes. “We were going to do the development in Maya and found that it would have doubled our time frame. So we decided that creating the videos via Second Life with employees as actors and actresses worked very well.”

It took around 13 months to develop all of the videos and implement them into the content management system built for this training module, said Hughes. There are over 900 machinima videos which last between 30 seconds to one minute each.

“It is a custom content management system that allows for the client to change content, quiz questions, swap videos, swap audios and swap text as the training manual changes,” saidÂ Hughes.

The content and videos used for Vermont DMV was built from scratch based on the story board of its manual.

“The only thing handed to us by the state of Vermont was a 90-page document and we came up with the entire concept,” saidÂ Hughes. “All the videos, audio and interactive assessments were built from scratch. We also used Second Life models for images of cars, avatars, etc. within the interactive assessments which are not videos, but interactive pieces that students can use and move around.”

Designing Digitally has in-house professionals who work together in its studio to create innovative projects, saidÂ Hughes. “We primarily work with large to mid-size corporations, universities and government agencies. Many of them may have in-house e-learning teams or instructional designers, but I think they struggle with the gamification of learning and training and that what we have a full focus on.”

Designing Digitally currently creates similar modules for various government agencies both at the federal and state levels together with corporate clients. “We sometimes use Second Life, but lately for higher fidelity, we have been building them in Maya,” Hughes added.

Lemuel V. Cacho
Lem Cacho is a freelance business and technology writer based in the Philippines.