How to get a free ad on Hyperica

By: Maria Korolov
In: Maria's Worlds, Metaverse
With: 0 Comments

I love promoting the hypergrid, so if you have an event, store opening, land sale, or anything else of potential interest to hypergrid travelers, I can run a free ad for it on the Hyperica website.

Here’s what you have to do.

The ad should be 300 pixels wide and 250 high, in either JPG or GIF format. I recommend GIF, because you can add in animations.

Even a subtle effect like a sparkle can really draw attention to an ad. There are lots of free GIF generators out there, such as GIFMaker, MakeAGIF, or Picasion. Or you can use GIMP or Photoshop to create your GIF.

Remember to use high-contrast colors, such as red-and-white or black-and-white or blue-and-white. Don’t use low-contrast combinations like yellow and green or pink and purple. Not only will the ad not stand out, but it will be difficult to read.

Another common mistake is to use too many colors, which also makes the ad hard to read. 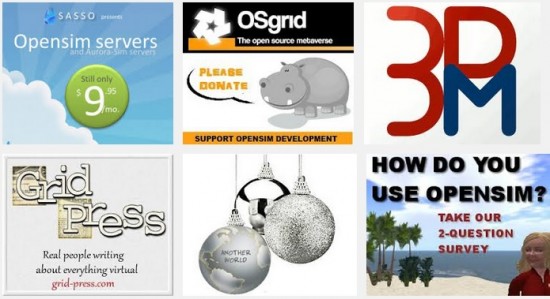 The simpler, the better

Look at these ad examples. Notice which ones draw your attention. They’re likely to be the ones with clear, dramatic images or text.

Have a call to action

Your ad should ask the reader to do something. Invite them to the grid’s grand opening. Or to subscribe to your events calendar. Or to check out some pretty pictures from your grid.

Ads that do nothing but create awareness that your grid exists are nice, but isn’t it better if the ad actually got people to interact with your grid in some way? Start developing a relationship?

Make sure your ad communicates a sense of urgency. That if people don’t visit your Valentine’s Day sim this month, it will be gone forever. Or, at least, until next year.

If you want to offer a discount or special offer, come up with a variety of offers instead, and advertise each one only for a limited time each year. Different people are attracted to different deals. Someone who isn’t interested in a half-off sale, might go for a buy-one-region-get-one-free. Someone else might be drawn in by no setup costs, or first month free, or a choice of free custom-made region terrains or starter homes.

Take advantage of the holidays

There’s a reason why so many traditional advertisers have holiday specials. They work.

Holidays offer an opportunity to associate your brand name with something your potential customers already know and love. Plus, they’re an easy way to update your ad, so it doesn’t look the same as the previous month. Finally, they’re time limited — holidays come and go, so your customers have to hurry if they want to take advantage of a holiday sale.

Be prepared to wait

Remember that it takes, on average, seven points of contact before someone makes a shopping decision.

That means that potential customers have to see and notice the ad several times before they go ahead and click. Depending on how many times they visit Hyperica, that might take months or even longer.

One of the biggest mistakes that advertisers in general make is pulling an ad too early, before it had time to have its effect.

You can speed up the process, however, by running the ad in more than one venue.

If at all possible, run the same ad, or group of related ads, in multiple locations to drive home the message. Use it on your website, newsletters, and on in-world billboards, send it to other bloggers to run on their sites, or set up an ad exchange with non-competing grids.

Combine it with direct mail campaigns or other types of outreach for extra oomph.

Don’t forget to include your name

This may seem obvious, but this week I received two ads that never mentioned who the ad was for.

It totally ruins the point of running an ad if you tell people, “Our grid is number one!” but never mention which grid, exactly, you’re talking about.

Host your ad on your own server

I don’t mind uploading your advertising images, but then you need to send me new ones every time you want to change the ad, and wait around for me to upload them.

Instead, you can host the ad on your own site, and just send me the link, something like www.mygrid.com/ads/Hyperica_ad.GIF

When you need to change the ad, just upload a new image to the same location and file name. And poof — every site everywhere that uses that image is instantly updated!

This is especially handy for in-world billboards, since you don’t have to walk around updating the texture on each one — you can just use media-on-a-prim or the OSSL command OsSetDynamicTextureURL for older viewers.

Once people click on your ad, you want to send them somewhere. Most of my advertisers today just send visitors to their grid or company home page.

That’s fine, but they’re losing an opportunity to create some extra engagement.

A better alternative is to create a landing page, something like www.mygrid.com/landing/Hyperica_visitors.HTML

Then update that landing page to correspond to the ad.

For example, if you’re promoting a two-for-one sale, put the details on the landing page, with an “order now” button.

If you’re asking them to take a survey, put the survey there.

By having one address for the landing page, an address that remains the same through the year, you can update your offers at any time without having to come back to me and ask me to update the destination address on the ad. This is especially convenient if you run the same ad in many different locations, and don’t want to have to go around updating all of them.

And the easier an ad is to update, the more often you’ll do so, which will help keep the ad fresh and exciting for your potential customers.

Any advertiser can, at any time, upgrade to a paid ad in order to reserve a particular slot, or guarantee that a certain percentage of visitors sees each ad. Paid advertisers also get direct access to our third-party ad management system, AdSpeed, where they can detailed information on the people who saw or clicked on their ads, or change the destination URLs or image links for their ads.

Our rates are here.

This year, all new advertising revenues are allocated towards hiring more researchers to expand the Hyperica directory. Thank you for your support!