By: Press Release
In: Briefs, News
With: 5 Comments

SAN FRANCISCO, CA — Unity Technologies unveils Unity 5, the next generation of the award-winning Unity multiplatform engine and development tools, during its Developer Day at the Game Developers Conference in San Francisco. Unity 5 brings a wealth of new capabilities and features enabling all developers, from the smallest indie teams to the largest studios, to create amazing games and interactive experiences, and painlessly deploy them to almost any platform. Unity 5 is available for pre-order from the Unity Store and includes access to Unity 4 and all its remaining updates.

Unity 5 is a massive update to the Unity Engine, including features such as the Enlighten real-time lighting system and physically-based shaders that provide the power to render stunning high-quality characters, environments, lighting, and effects. Workflow efficiency increased dramatically due to the new unified shader architecture, in-editor real-time lightmap previews, and improved asset bundling. Audio designers will find a completely overhauled audio system including the new Audio Mixer for creating dynamic soundscapes and effects. 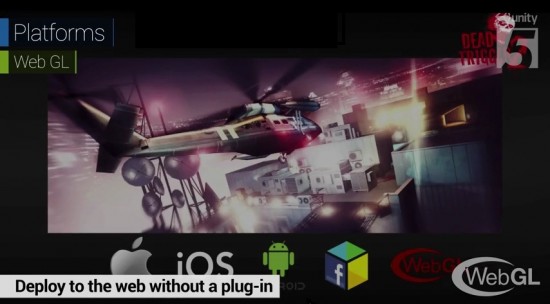 Unity Technologies is committed to creating opportunities for the massive Unity community of developers to find success. Therefore Unity 5.0 will see the launch of the integrated Unity Cloud ad-sharing network for painless cross-promotion of mobile games, and an addition to Unity’s unrivaled multiplatform support with the introduction of WebGL deployment.

“Every time we ship a new version of Unity, we’re looking to empower developers with technology that’s more powerful and easier to apply than ever before,” said David Helgason, CEO, Unity Technologies. “With the huge additions of physically-based shading, lighting workflows, a new platform, and a new built-in method for user acquisition, we’re improving Unity dramatically from both a creative and business perspective.”

Unity 5 includes a host of new abilities, including the following marquee features:

Unity 5 will launch with a new built-in physically-based shader system. It is designed to cover a wide variety of real-world materials under all lighting situations and includes a vastly improved workflow, from the art pipeline all the way to the UI. Unity 5 also introduces full deferred shading and baked reflection probes for realistic environment-based specular highlights.

Unity has entered into a partnership with Geomerics to integrate Enlighten, their industry-leading real-time global illumination technology, into Unity 5. Enlighten is the only real-time global illumination technology optimized to deliver fully dynamic lighting in game on today’s PCs, consoles, and mobile platforms. Animate lights, emissive material properties and control the environment lighting in real-time. Enlighten’s technology also brings dramatic workflow improvements, enabling artists and designers to work directly in Unity 5’s editor to create realistic and engaging visuals for all game styles. The technology is the lighting solution of choice for some of today’s most advanced and best-selling titles.

In partnership with Imagination Technologies, Unity 5 will be the first-ever development platform to ship with in-editor real-time lightmap previews based on Imagination’s ground-breaking PowerVR Ray Tracing technology. This exciting addition allows for near instantaneous feedback from changes to global illumination lightmaps by displaying an accurate preview in the editor’s scene view of how lighting will look in the final game. With this technology, artists can continue to iterate and refine the look of a level while final lightmaps update and bake in the background, dramatically decreasing the amount of time needed to make artistic adjustments to scenes.

Unity’s entire audio pipeline has been rewritten to be more efficient and flexible. The first big feature included with the overhaul is an Audio Mixer designed to allow highly complex real-time re-routing and effects scenarios. Designers can take snapshots of mixer settings for dynamic transitions between sound profiles during gameplay.

Unity’s multiplatform functionality remains one of its most valuable aspects and Unity Technologies is happy to announce its collaboration with Mozilla to bring WebGL and asm.js support to Unity. Starting with Unity 5.0, developers will be able to get early access to Unity’s WebGL add-on to begin creating interactive experiences for plugin-free play made possible in supported modern browsers. Attendees at GDC can stop by the Unity booth to see a demo of Madfinger Games’ Dead Trigger 2 running on WebGL.

Unity 5 will also see the launch of the Unity Cloud cross-promotion network, enabling mobile game developers to run full screen interstitial ads in their mobile games, as well as exchange ad units with other Unity developers, to unlock the combined power of over half a billion mobile game installs for free.

Furthermore, Unity 5 introduces many other additions and improvements:

Unity 5 is available now for pre-order from the Unity store (https://store.unity3d.com/). Those who pre-order Unity Pro 5 will also receive Unity Pro 4. Unity 4.6, which will be the last major update in the Unity 4 cycle, will include the much anticipated overhauled GUI system.

Unity Technologies is demonstrating Unity 5 at the Game Developers Conference at the Moscone Convention Center, booth #1402.

Unity Technologies is the creator of Unity, a flexible and high-performance development platform used to make creative and intelligent interactive 3D and 2D experiences. The “author once, deploy everywhere” capability ensures developers can publish to all of the most popular platforms. Unity Technologies boasts a thriving community of over 2.5 million developers including large publishers, indie studios, students and hobbyists. To remain at the forefront of innovation, Unity Technologies tirelessly re-invests in its award-winning 3D and 2D development tools and democratization initiatives, such as the Asset Store digital content marketplace, Unity Cloud services, and Unity Games publishing and distribution division. Unity Technologies is headquartered in San Francisco and has offices located worldwide. For more information, visit unity3d.com.

Geomerics Limited is a wholly owned subsidiary of ARM Holdings PLC, delivering cutting-edge graphics technology on today’s PCs, game consoles and mobile platforms. Geomerics’ Enlighten is the industry’s most advanced dynamic lighting technology. Enlighten has helped defined the look of some of the industry’s most iconic titles, including Battlefield 4, Need for Speed Rivals, Eve Online, Quantum Conundrum, and many more. Enlighten has been licensed by many of the top developers in the industry, including EA DICE, EA Bioware, Take 2, CCP, and Square Enix. Geomerics has developed a reputation for the excellence of both its technology and its support. Visit www.geomerics.com for more information.

Imagination’s PowerVR graphics processors (GPUs) are the de facto standard for mobile and embedded graphics, having shipped in over a billion devices to date. PowerVR Ray Tracing technology represents the next disruptive step in the evolution of graphics for a broad range of consumer and mobile platforms, as well as gaming consoles and mainstream gaming PCs, workstations, and servers. The breakthrough technology enables more immersive games and apps with real life dynamic lighting models that enable effects such as dynamic soft shadows, realistic reflections and transparencies, and global-lighting, previously unachievable in a mobile form factor. PowerVR Ray Tracing can be used alongside existing mainstream graphics techniques, allowing developers to preserve the vast majority of the investment that they have already made in their game engines and tools while enabling them to bring a new level of quality and enhanced realism to their apps and games.

Mozilla has been a pioneer and advocate for the Web for more than a decade. We create and promote open standards that enable innovation and advance the Web as a platform for all. Today, half a billion people worldwide use Mozilla Firefox to discover, experience and connect to the Web on computers, tablets, and mobile phones. For more information please visit mozilla.org.

Latest posts by Press Release (see all)
2014-03-18
Previous Post: Working on my business, not in it
Next Post: Sony unveils VR headset