By: Maria Korolov
In: Maria's Worlds
With: 0 Comments

I gave a talk about virtual reality yesterday in Boston at a conference of the Society of Professional Journalists.

The main goal of the presentation was to explain what virtual reality was, give a few examples of virtual reality currently being used for business, and discuss some ways in which the emergence of a virtual metaverse could affect journalism.

Inevitably, someone asked how far off this was, and I gave the stock answer — virtual reality has always been five years away — and explained that there were key pieces of the technology that were still missing.

After the session was over, after the question-and-answer period had concluded, some of the younger audience members stuck around and we discussed some of the ways that journalists could use virtual reality to tell stories.

Virtual reality can answer the question “What would it have been like to be there?” better than any other medium.

Virtual reality can put audience members right into the middle of a historic disaster, or a recent one, to truly appreciate the scale of the event and to really understand the repercussions of not following safety procedures.

Virtual reality could allow viewers to experience a particular event from the perspective of the people involved, to help them appreciate the complexities of a case.

For example, viewers could experience what it would have been like to be Trevor Martin, or George Zimmerman.

Creating a virtual version of an actual location is quickly becoming easier as well, such as with this camera from JauntVR.

What would happen if, say,Â if average temperatures in your region rose by 5 degrees. Virtual reality could let viewers see the impact of proposed changes on their own lives.

What would happen if the new highway is built? If alternate side street parking is eliminated? If the wind shifts and drives the forest fire in a new direction?

It is one thing to hear or read about the effects, or see animated projections. It’s quite another to stand in front of your house and watch the plant species change around you, or the fire sweep down on your neighborhood, or watch the street congestion increase.

The power of these immersive simulations will also usher in a new wave of ethical concerns, as well as privacy worries.

I did turn out to be very wrong about one thing, however.

The use of virtual reality in journalism isn’t five years away. It’s already here. 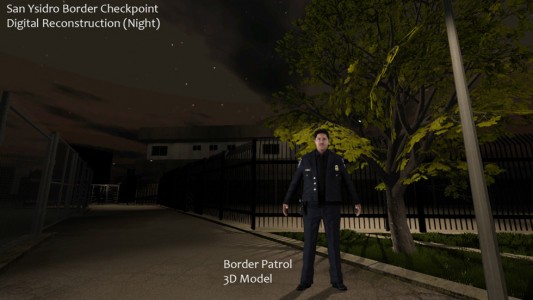 Journalist Nonny de la PeÃ±a, for example, has been using virtual reality simulations to tell stories for years, as with herÂ immersive documentary Use of Force. You can read an interview with the director here.

More examples of immersive storytelling can be found at the StoryscapesÂ sectionÂ of the Tribeca Film Festival.