By: Maria Korolov
In: Features
With: 35 Comments

The OpenSim metaverse nearly doubled in land area this month, as Virtual Worlds Grid added the equivalent of more than 18,000 regions to its grid, taking advantage of new variable size region functionality.

Without Virtual Worlds Grid’s variable regions, the top 40 OpenSim grids would have gained 1,122 regions this month.

The grids also gained 2,578 registered users and lost 155 active users. The loss is partly due to my decision to not include user data from AviWorlds and Virtual World City due to some irregularities.

Zandramas has made the ten most popular grid list for the first time, and AviWorlds is back on the list again.

This section is going to be slim this month, since I’m filing this article while on the road. If I’m missing your announcement here, please email me at [email protected] and I’ll run it as a separate article when I’m back at my office on Sunday.

It was a close race with OSgrid, which — until this month –was the largest OpenSim grid by land area. OSgrid only has 98,613 registered users, to InWorldz’ 100,037.

Its closest commercial competitor is Avination, with 69,084 registered users.

Registered users numbers are not necessarily indicative of the health of the grid since they are cumulative, and and a grid that’s been around a long time might have a large number of registered users but few users that are currently active. This is not the case with InWorldz, however, which is not only a grid that’s been around for a while, but a grid which continues to dominate the popularity charts every month.

Kitely to join the hypergrid next week

Kitely, the largest commercial OpenSim grid by land area, is getting ready to turn on hypergrid connectivity.

Meanwhile, the Kitely Market continued to gain new listings, with more than 100 new products added since this time last month.

Kitely’s marketplace is unique in that it allows merchants to sell their content, if they wish, to any hypergrid-enabled grid or closed grid that decides to allow Kitely Market deliveries, as Zandramas did last month.

“The Kitely Marketplace integration turned out to be a big success and a hit,” Zandramas manager and co-founder Suzan De Koning told Hypergrid Business. “Our residents love it, we all have been able to purchase things that we normally would not be able to purchase.” 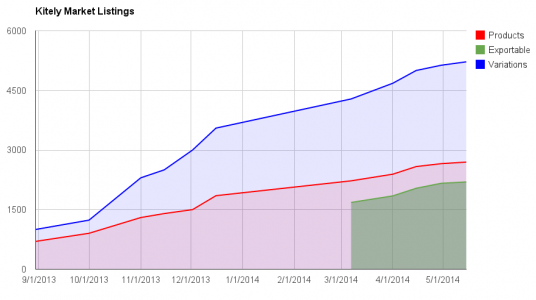 The closed, commercial, invite-only Zandramas grid celebrates its first anniversary this month with a series of live music events on May 24.

The grid has also begun allowing residents to buy advertising on the grid’s main website, splash page and in-world billboards on the grid’s public areas. The goal is to promote merchants and organizations on the grid, manager and co-founder Suzan De Koning told Hypergrid Business.

The grid has also rolled out new self-service tools for region owners, including the ability to restart a region right from the website.

Zandramas has also been updated to the latest preview release of OpenSim, and Bullet physics is now in place on all regions.

The grid hosts its own regions, but uses Zetamex for technical help when needed.

“We continue our relationship with Zetamex, we pay them to help us in emergencies and help us maintain our backend as a management service and also on designing these custom features for our grid,” said De Koning. “We believe that Zetamex services are very top notch, they have helped us when no other hosting provider would even touch us and they helped us get our grid on par with the other big grids.”

Zandramas has recently taken a fresh look at its by-invitation-only membership policy, by surveying residents about whether they wanted to open up the grid to the public.

“The majority voted that they want to keep Zandramas the way it is because it has really made residents feel safe, and they feel they have a better quality of life in our grid instead of it being open 100 percent, where anyone can just join without validation,” she said.

As a side benefit, the invitation-only policy has also protected the grid against griefers and helped create a stable community on the grid.

“But Zandramas is working on a plan to open the door a bit more to people who have not been referred,” she added. “There will be more information about that soon!”

The closed commercial Virtual Highway grid has upgraded its servers to ones that have four times as much memory as previously, and a higher level of support. The grid has also opened a coffee shop at the landing area.

“Any hardware problems will be handled in a much more timely manner,” grid founder Gene Call told Hypergrid Business.

“Andrew Hellershanks, our technical manager, has done a fantastic job on the upgrade,” he added. “Next, we are testing the upgrade to the new 0.8 RC 1 [OpenSim preview release] grid software with plans to use it once it is stable enough for production.”

Virtual Highway has begun working on preparations for the Fourth of July celebrations, with a planned country theme with barn dancing and a treasure hunt in a hay maze, free shops for merchants, and fireworks.

There will be a building competition leading to the celebration. People can take part by joining the “Festival Park” group, claiming a building spot on the Festival Park region and buying a hollowed-out rectangle prim, then building inside the prim. There is no cost to participate. The build must have a Fourth of July theme, and can be any size and any number of prims, but must be concluded by June 30 to allow for time for judging. 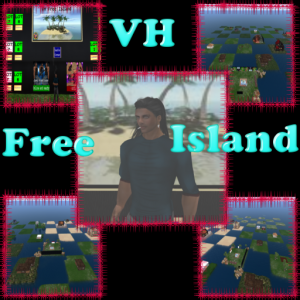 “It’s great starter land to come and claim as home while you learn your way around Virtual Highway,” said Call. “You can get either grass or sand just pick the one you want. There are free houses at the Free Island Welcome Center, also.”

There are twelve regions in the free land program, with eight island on each.

“If you need any help with the free islands, you can contact Geo Falcone or Gemini Solano,” Call added.

The stats page for the standard OpenSimulator distribution reported 1,952 new downloads this month, for a total of more than 31,000 downloads of OpenSim from the official website since the start of 2013, when they began publishing  the data. Interpolating based on trends from other distributions, the Hypergrid Business estimate of OpenSim downloads from the official website is now a little bit over 124,000.

The stats page for the Diva Distro, a user-friendly distribution of OpenSim, reported 473 downloads this month, for a grand total of over 30,000 downloads since the distribution was first released in May of 2011.

Sim-on-a-Stick, an even more user-friendly, packaged version of the Diva Distro, was downloaded 1,693 times this month, a record high for this distribution. That adds up to over 31,800 downloads since the distribution was first released in May 2011.

The even easier still New World Studio, which allows people to set up private grids in just a few clicks with a fully automated installer, recently began publishing its usage statistics. As of today, it reports 25,385 regions on 2,656 different active mini-grids running on this distribution of OpenSim. That’s an increase of 1,422 new regions, and 113 new mini-grids.

Adding in these three other major distributions of OpenSim, we estimate that the OpenSim server software has been downloaded more than 189,000 times since the start of 2010.

Data from The Hypergates was not available this month as the site was down.

Meanwhile, Second Life has resumed its steady progression of region losses this past month, according to data from GridSurvey, with 57 fewer  regions today than this time last month. The Second Life grid now has 26,119 regions total, down 1,229  regions from this time last year, and 5,766 fewer regions than its peak in June of 2010.

The list below is a small subset of existing OpenSim grids. We are now tracking a total of over 800 different publicly-accessible grids, 211 of which were active this month, and 184 of which published their statistics.

Nerdy Pappy - 4/20/2021
Gloebit payment services is down
FAIL! Unacceptable. A company with any secure business practice has redundancy and does not rely on fail amazon. It's a good excuse though. Gloebit is FAIL, they might as well pack their bags and...

kindra Turian - 4/18/2021
Littlefield celebrates eight years as its own grid
I will pass it on to Master::)

Walter Balazic - 4/17/2021
Littlefield celebrates eight years as its own grid
Thank you very much Butch!

Walter Balazic - 4/17/2021
Littlefield celebrates eight years as its own grid
Thank you so very much! I hope you and RSVP are doing well. We were just talking about you two and the Turians just last week. You should stop by we'd love to see you!

Stephen Mol - 4/17/2021
Gloebit payments still down in yet another protracted outage
I'd be curious to know how many people tip using paypal donation boxes. I think I tried it in the past but had no luck getting anything.