By: Maria Korolov
With: 78 Comments

Linden Lab is working on a next generation virtual world that would not be backwards compatible with Second Life, said Radegast viewer developer Latif Khalifa in a post at SLUniverse today.

According to Khalifa, Linden Lab CEO Ebbe Altberg broke the news today at a meeting with third party viewer developers.

Other viewer developers chimed in to the discussion, confirming that it had taken place, that there was only a small team left toÂ continue to support Second Life and that the majority of Linden Lab developers were at work on the new platform.

“It was made clear that this will run on many more platforms than it does now,” wrote Catznip viewer developer Trinity Dejavu.

As of now, Linden Lab has not responded to my request for comment. I’ll update the story if they do. 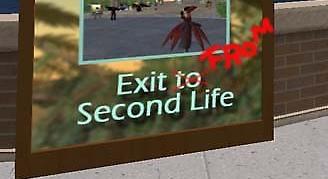 Bad news for the metaverse

As I’ve repeatedly said before, my vision for the metaverse is something like the Web, with many virtual worlds, running on a variety of server software both open source and proprietary, all interoperable with one another.

Right now, the closest we have to this is the hypergrid, where anyone can set up a virtual world using the OpenSim software and, if they choose, allow teleports to other hypergrid-enabled worlds.

I was figuring that, eventually, Second Life would enable export permissions — off by default for most existing content — and allow their users to hypergrid teleport to other grids.

I was also expecting Linden Lab to begin offering Second Life server software, as they did at one point for enterprise customers, for people who prefered to use brand-name commercial software to run their world.

This is the way the Web works today. You can run your website onÂ the open source Apache software, or a couple of other open source alternatives, or you can run it on proprietary Windows or Sun platforms. Or, if you’re an average person like me, you can host your website with a company using cheap open source software, or pay extra for a service running on a commercial platform, and you might never even know what actually runs in the deep background.

Either way, your visitors won’t notice — no matter the back-end system, all website today are pretty much equally accessible by all browsers. Gone are the days when websites posted notices saying, “This site best viewed in Internet Explorer.” Okay, a couple of sites might still do that — ones that haven’t been updated since the 1990s.

In my opinion, one of the factors that made the Second Life-OpenSim ecosystem so appealing as a possible platform for the future metaverse was that combination of commercial and open source. There are no real barriers between Second Life and OpenSim — content can easily move and back and forth, they use the same viewers, and teleports between the two platforms have already been tested.

Sure, the graphics aren’t that great, but neither areÂ the graphics on the Web, compared to almost anything else.

Second Life and OpenSim are good enough. Plus, both are way cheaper and easier than any of the other platforms used to create virtual worlds. Both already have viewers that support the Oculus Rift. And there are millions of people out there who have tried Second Life, and are familiar with the interface.

Platform for a metaverse vs. commercial product

Platforms are rarely replaced. Instead, they evolve. And as they grow bigger and more popular, they evolve more slowly. Moving from one platform to another is a major, traumatic event. Upgrading from Windows XP to Windows 7 is one thing — switching to the Mac is something else entirely.

But products — products are replaced all the time. You get bored with The Sims, and pick up a copy of The Sims 2. You don’t expect to be able to move your characters over — it’s a brand new game. In fact, Linden Lab’s former CEO, Rod Humble, headed up The Sims franchise in his previous job at Electronic Arts.

If Second Life is just a product to Linden Lab, then it makes sense to be working on the second version. One where users will have to buy all new stuff all over again.

OpenSim currently draws a large number of users from Second Life. Second Life has brand-name recognition, plenty of training resources, and a lot of content — enough to draw in a million users a month. Some of those users, needing more land, or more privacy, or more control for their school or business, move on to OpenSim.

If Linden Lab builds a new platform and throws all its marketing muscle behind it, leaving Second Life to wither away, some of those Second Life users might cross over to OpenSim. More might switch to the new platform, or leave altogether.

In any case, the flow of brand-new users will probably slow down quite a bit.