War breaks out over WWII RP on InWorldz

By: Maria Korolov
With: 121 Comments

InWorldz residents are circulating a petition demanding the removal of a World War II-themed role playing build from the grid.

“I cannot support a grid that makes it possible for people to play a role playing game based on World World II,” resident Suzan de Koning told Hypergrid Business. “There are other possibilities to play soldier games without using Nazi crosses.” 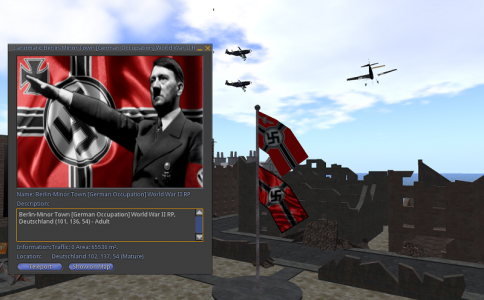 She added that she has given up her land in InWorldz because of how strongly she feels about the issue.

De Koning added that, as a European, she is particularly sensitive to this kind of role playÂ because of her family’s experiences in World War II.

“I, as a European, do not understand how this is even allowed,” she added. “In most countries in Europe, it is not.”

Although de Koning was the only one who agreed to go on the record about the issue, she is not the only InWorldz resident who contacted Hypergrid Business about it. There is also an on-going discussion on the InWorldz forums.

World War II themed role play is not illegal in the United States, however, and World World II-themed entertainment of all kinds is popular — movies, books, video games and more. In fact, because of the first amendment of the US Constitution, Nazis are even allowed to march in public parades.

InWorldz is a US-based grid.

InWorldz founders have responded to the questions posted on the forums and to the petition by asking for evidence that the build in question goes beyond standard World War II roleplay to actually promoting the Nazi cause.

“Show us evidence that this is some kind of neo-Nazi or hate group in a disguise and we’ll take action on it,” said InWorldzÂ co-founder and CTO David Daeschler â€” also known as Tranquillity Dexler in-world — in a forumÂ post. “Everything else is conjecture until you have proof.”

He also pointed out that role play often involves scenarios that are painful for some people, such as murder, genocide against Native Americans, or slavery.

“If we start drawing lines now we’ll also have to force every sim that depicts any kind of slavery to close down as well,” he wrote. “That would mean no Civil War sims, and no sims depicting any kind of sexual trade. After all, there is a disturbing amount of human trafficking that is still occurring to this day. There are 27 million girls enslaved across the world with an average age of 14. Yet people still have the freedom to fantasize about being traded.”

Daeschler told Hypergrid Business that he has personally been toÂ the buildÂ in question.

“I have visited the sim looking for any evidence of activity beyond someone setting up a role play sim based in Berlin in the 1940s and haven’t found any,” he said. “The ‘camp’ that people are referencing looks like a standard run-of-the-mill prison camp with neatly made bunk beds and could possibly be used for “free the captives” RP. It is does not resemble the racks photographed and used in nazi concentration camps. The only Nazi symbols and propaganda are swastikas that would have been found during the time period and most of the sim is pretty barren. I think that a group of people are trying to force our hand on this because it is offensive, but I have yet to hear or see anything that would support the broad accusations being made.”

“I will make it simple and concise here,” she wrote in a post on the forum. “As long as hate speech, racism, etc., are not being espoused by the role play, but is a first person shooter or historical role play of what happened, then it is not a violation of the terms of service. “There is nothing wrong with exploring the darker side of history, sometimes it leads us to fascinating conclusions or possibilities… If it bothers you so much, do not go there.”