5 tips for designing for virtual reality

When I demoedÂ my Oculus Rift game, “Black Hat,”Â recently, one man told me thatÂ he felt sick the previousÂ time he tried a Rift. I convinced him to give it another go and he was surprised by how pleasant the experience was.

Quite a few people become nauseous while in the Rift. Part of designing a great virtual realityÂ experience is not making people sick. The best resource I found on this topic is theÂ Oculus Rift best practices guide. It’s a long read — 51 pages — so I’ll summarize the main points along with my own learnings here.

It’s easy to underestimate how much processing power virtual reality takes. The new Oculus DK2 has a resolution of 960 x 1080 and renders two cameras, one for each eye, and post-processing needs to be applied to both cameras.

I learned this the hard way while working on Blockulus, a game where you knock down elaborate towers. Even 50 fps made people uncomfortable and unable to continue the game. In the end, we had to aggressively cut down on the number of pieces, and remove almost all post-processing.

2. Map the game world to reality as much as possible

To keep the immersion of a virtual reality experience intact, paying attention to small details. They matter. In

Blockulus, we made adjustments for the height of the player and tried to keep dimensions and speeds realistic.

Also, don’t move the camera without an user’s control. This is really disconcerting and causes sickness.

One design challenge is to make turning more natural. Your head can only rotate a certain amount, so how do you make big rotations? One method is withÂ discrete rotation moments, as explained the creators ofÂ the Gallery. We tried this in Blockulus and it works surprisingly well.

Games that require large motions can cause people to crash into things. Head movements can cause sickness. This head bobbing game was fun for about thirty seconds, then made Mark feel ill.

There’s an obvious reason to keep controls simple: people can’t look down to see them. While we were playtestingÂ Black Hat, we had to place people’s fingers on the right part of the keyboard. They would reach up to adjust the rift or scratch their face, and lose their place. Every time.

Once we switched to a controller, this became a lot easier. Note the lady reaching out for the controller. She had no problem figuring out the controls by touch. If you must use a keyboard, make sure the controls are simple and findable when you can’t see them.

Modern gaming makes heavy use of normal mapping to createÂ the illusion of 3D depth. In virtual reality, this falls apart.

You can easily see that a ridge textured to look 3D is fake. 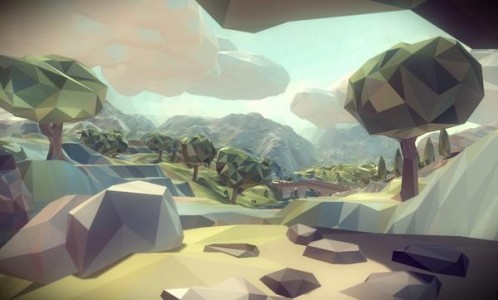 After every playtest, I ask people what’s awesome about virtual reality. Here are examples of common answers:

I’ve watched all kinds of people use the oculus rift and they all had a great time. We even had a 70 year old lady play our game. And she kicked butt!

Xin Xin
Xin Xin is a Boston-based designer specializing in interaction design and virtual reality. She is currently the lead designer at Panjiva.