On Saturday, June 6, Avination will be hosting a charity benefit in support of theÂ Sophie LancasterÂ Foundation, an organization set up in memory ofÂ Sophie Lancaster and to promote a more tolerant, less violent society.

Who is Sophie Lancaster?

Sophie Lancaster was a 21 year old goth girl who was murdered while trying toÂ protect her partner during the night of August 11, 2007. Sophie and RobertÂ were on their way home, when a group of at least 5 teenagers suddenly attackedÂ them without provocation. They assaulted Robert Maltby. When he was knockedÂ unconscious, Sophie Lancaster tried to protect him and fell victim to theÂ attacks herself.

A witness later told the police: “They were running over andÂ just kicking her in the head and jumping up and down on her head.”

Witnesses reportedÂ that afterwards, “The killers celebrated their attack onÂ the goths â€” or “moshers” – by telling friends afterwards that they had “doneÂ summat good,” and claiming: “There’s two moshers nearly dead up Bacup park â€”Â you wanna see them â€” they’re a right mess.”

The injured couple were assistedÂ by some of the teenagers who called emergency services and then stayed withÂ them and tried to tend their wounds.

The attack was widely condemned, not only in Lancashire and Rossendale, butÂ also around the world. 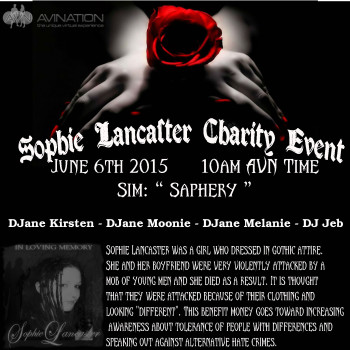 Bands like VNV Nation and Goth festivals around theÂ globe dedicated songs and collected donations for the family, who decided toÂ setup a special fund to be known as “S.O.P.H.I.E,” standing for “Stamp OutÂ Prejudice Hatred and Intolerance Everywhere” aiming to “provide an appropriateÂ memorial; a lasting legacy to raise awareness of the injustice perpetrated
against Sophie Lancaster and to work towards a more tolerant, less violentÂ society.”

Avination is a grid which stands for tolerance and acceptance of everyone.Â Some of the owners and operators are goth themselves, many of the residentsÂ consider themselves to be at least part of the goth culture. Yet, it’s notÂ only goths but many other social fringe groups too. Everyone should alwaysÂ feel safe in Avination.

Since its beginnings in 2011 Avination operators and employees always upheldÂ the principles of acceptance and tolerance and the right to free expressionÂ without fear of persecution.

With this charity event residents of Avination want to show their support andÂ take a stance against any prejuduce, hatred and intolerance. The tips andÂ donations will go to the S.O.P.H.I.E foundation to support their cause toÂ raise awareness against violence everywhere.

The event, held on the Saphery region, will start at 7 p.m. Pacific time, which is 11 a.m. Avination time, and run through midnight Pacific or 3 p.m. Avination time and will feature DJsÂ Kirsten Sweatheart,Â Moonie,Â Melanie Milland andÂ Jeb.

This event is sponsored by Pangea in Avination in collaboration with The GridÂ radio.

The Sophie Lancaster Foundation isÂ not involved in the organisation ofÂ this event.