Report: Virtual reality market will be worth $70bil in 2020

Consumersâ€™ relentless pursuit for richer audiovisual experience has propelled the popularity of virtual reality devices and drawn in more companies to invest in this market. Furthermore, the competition among the increasing number of players will bring about diversification and growth of virtual reality applications.

According to the latest estimation by global market research firm TrendForce, the total value of virtual reality market –Â including hardware and software — will reach US$6.7 billion in 2016 and will proceed to skyrocket to US$70 billion in 2020. 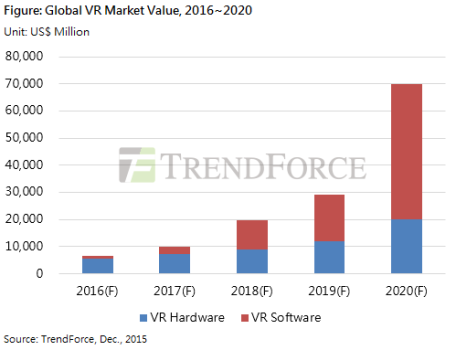 â€œThese explosive growth projections actually do not sufficiently reflect just how hot the virtual reality industry is right now,â€ said Jason Tsai, TrendForce wearable device analyst. â€œThe figures do not include the value of non-commercial uses of virtual reality technology. For example, the industry is currently pushing the development of free software and do-it-yourself apps. While these projects do not immediately generate revenue for the developers, they have a vital role in the promotion market growth and innovations.â€

Tsai pointed out that the virtual reality industry is at its infancy, so companies behind major social media platforms such as Facebook and YouTube will provide software tools and support services for the production of virtual reality videos.

Peopleâ€™s habit of creating, uploading and sharing their works on these platforms will result in the growth of user-generated virtual reality content that will in turn attract more consumers. In sum, social sharing will make virtual reality technologies more influential and more tied to social media platforms.

Other media and entertainment organizations are experimenting with virtual reality technologies as well.

National Basketball Association, for example, has introduced virtual reality broadcasting this season to provide fans at home an experience akin to watching games live at the arena.

â€œThe development of the virtual reality industry is not solely based on wearable devices launched by major hardware vendors such as Sony, Oculus and HTC,” Tsai added. “Much of the growth drive also comes from independent developers that contribute innovative apps to the virtual reality industry. Their market value is not often reflected in the data. Since making apps does not have a high entry barrier, there has been a proliferation of non-commercial software made by students, independent developers and content providers. Instead of being guided by immediate commercial interests, they aim to attract consumersâ€™ attention with innovative products. Major device vendors are therefore aggressively courting these independent developers. Collaboration with academic institutions is also another way for the industry to diversify the virtual reality content to create more value.”