Having tried more than a dozen virtual reality headsets over the past few months, there are a few features that I now consider to be must-haves — but which seem to be rare to find.

If any manufacturers are paying attention, please considering including more of the following in your next resign.

When passing around the Gear VR headset to friends and family members at various holiday parties recently, one of the best features was that it would fit easily over glasses.

If you’re a headset manufacturer, pick up a Gear VR set and see how they do it.

The Gear VR, for example, not only fits a small number of late-model Samsung phones, but also requires that all protective cases and covers are removed.

This gets extremely burdensome for some people. Otter cases, for example, are really hard to take off and put back on again.

But some headsets have more flexible cell phone holders. For example, the Freefly VR headset has a very flexible holder, and was able to fit my friend’s Otter case.

There are multiple approaches out there for holding smartphones in place. Merge VR has a very flexible drop-in pocket. The Dscvr has a silicone band to hold the phoneÂ in place.

The more difficult the holder is to use, the less likely users are to casually pick up and use their virtual reality headsets. And if they have to take off their smartphone cases, that means the headset is going to be that much less likely to be used. Please take this into account when updating your headset or building a new one.

Today, Google Cardboard headsets often have different shapes, use different lenses, and have varying input mechanisms. To allow virtual reality apps to work with any headset, each manufacturer is supposed to create a Google Cardboard QR CodeÂ that fully specifies its configuration.

The application then combines that with what it knows about the smartphone itself — its size, screen resolution, and so forth — in order to create a three-dimensional, accurately focused image. 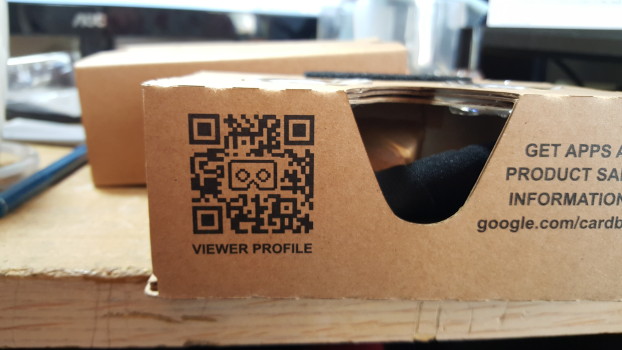 Not all manufacturers create QR codes for their headsets, or make them easy to find. I’m assembling a list of all the Google Cardboard QR Codes here, but it’s not exactly as convenient as if they were on a sticker on the headset itself. If you do have a QR Code, and have more than one headset — or are sharing the headset with others — then you have to load up the Google Cardboard app and load that QR Code, which isn’t particularly convenient.

And then it might not work. Either the QR Code has errors, or your headset is adjusted differently, or you have weird eyes, or something.

And sometimes there’s no QR code at all.

I want to be able to actually change the calibrationÂ from within the virtual reality headset itself, either to adjust an existing QR Code to work better, or createÂ a new profile from scratch. And I’d like to be able to save it, so I don’t have to go and find the QR code each time I switch between headsets.

The Gear VR headset knows when you’ve put in a smartphone, and automatically switches to virtual reality mode. I want all headsets to do that.

There’s some kind of NFC chip that’s supposed to do this, but I have not yet seen one in the wild. Do these things even exist? Do any headsets have them?

Better yet, I want the smartphone to know which headset it is, and automatically do all the configuration steps.

Plus, once you drop the smartphone into the headset, I want it to automatically launch a virtual reality browser. One that shows you all the virtual reality apps you have on your device, and lets you launch apps, and even download new ones. Like the Gear VR has.

And I want it to have voice control, so that if you had to, you could quickly reply to a text message, or post a Facebook status update, or do a Google search, all without taking off your headset.

5. Use the front facing camera

Every phone has a front facing camera, but most headsets don’t use it

I think that the front facing camera could be used for better positioning controls to make sure that the phone doesn’t go offÂ center. And it could be used for gesture control — to navigate menus, for example, or interact with objects.

This might involve upgrading the camera sensors to have better distance recognition.

The Gear VR home area doesn’t offer you anything in terms of a body. You’re just a disembodied camera hanging in the air. It’s creepy.

The same is true of many apps out there.

But personally, I want to be able to look down and see my legs. Or move my hands in front of me and see my actual hands in the virtual world. Sure, some apps will require customized avatars. Games, for example, usually require particular costumes.

But many apps don’t care what you look like. How difficult would it be to have the operating system itself let you configure a personal default avatar that any app can use if it doesn’t have its own custom avatar system?