By: Maria Korolov
In: Metaverse, News
Tagged: statistics
With: 17 Comments

The total land area of the public OpenSim grids rose slightly this month, and there were nearly 10,000 new registered users, but active user numbers dropped slightly over the holidays. 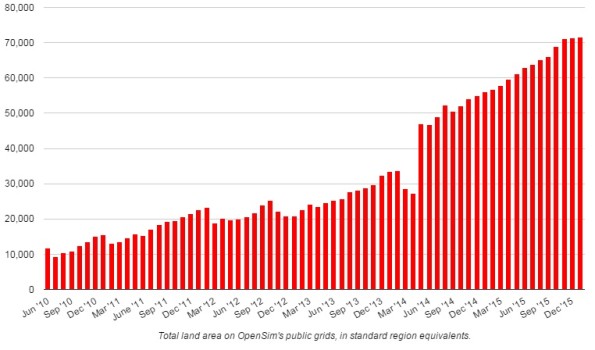 For those who are new readers, OpenSim is a free, open source virtual world platform that’s compatible with the Oculus Rift. It allows people with no technical skills to quickly and cheaply create virtual worlds, and then teleport to other virtual worlds. Those with technical skills can run OpenSim worlds on their own servers for free, while commercial hosting starts at less than $5 a region — compared to $300 a region for the same land in Second Life.

Here are the top ten most popular grids:

Virtual HighwayÂ has upgraded, with the purchase of a new backup server that replicates the entire grid and its assets to help protect against hardware failure. The grid has also rebuilt its welcome region, with new landscaping, games, meeting areas, and aÂ destination guide.Â Â The grid also has new property management offices, a Parade of Fashion runway stage, a redeveloped Learning Center, and a new Office Complex.

YrGrid celebrated its first birthday yesterday. The grid was one of the fastest-growing grids last year. I was a guest speaker at their celebration, and gave a motivational talk about getting your virtual business under way this year.

Grids that have been suspended for more than two months are marked as closed. If your grid isn’t on the active grids list, and not on the suspended list, and is marked closed when it shouldn’t be, please let us know.

And if thereâ€™s a public grid weâ€™re not tracking, please email us atÂ [email protected]. Thereâ€™s no centralized way to find OpenSim grids, so if you donâ€™t tell us about it, and Google doesnâ€™t alert us, we wonâ€™t know about it.

By “public,” we mean grids that allow hypergrid visitors, or have a website where people can register for or request accounts.

The list below is a small subset of existing OpenSim grids. We are now tracking a total of 1,119 different publicly-accessible grids, 292 of which were active this month, and 210 of which published their statistics.

The raw data for this monthâ€™s report is here.Â A list of all active grids is here.