10 questions to ask before buying a Google Cardboard VR headset

Are you planning to buy a Google Cardboard-compatible headset to watch virtual reality videos and play games, but don’t know which one to get?

What do you do? How do you choose? Here are some features to look for in your next headset.

Some of the least expensive Chinese headsets on the market, and some of the earliest pricy ones, have narrow fields of view, either because the lenses are far from the smartphone screen, or because they’re deliberately designed to work with small or low-resolution phones.

In particular, headsets designed to be used as private virtual movie theaters, a popular use in emerging economies, have narrow fields of view.

What is a good number to look for?

Anything above 90 degrees is generally going to be pretty good. The Samsung Gear VR, for example, is 96 degrees. My current favorite headset, sold as the LeNest and the FiiT, is 102 degrees.

This is what a field of view of about 90 degrees looks like on a Galaxy S6:

Smaller phones will have even smaller images and a wider border around them, creating the feeling that you are looking through a ski mask. Some of the border is due to a smaller image on the phone itself, and the rest is due to the sides of the headset squeezing in.

And this is what a 102 degree field of view looks like on my Galaxy S6:

The picture fills the entire screen of the phone, and the remaining thin black border is due to the headset itself.

In general, you want a headset that is as light as possible, but not so light that it breaks immediately. For example, a headset made of tissue paper would be extremely light, but not very usable.

Headsets made out of cardboard are also light, but don’t last very long. They are good for give-aways, and to give people a taste of what virtual reality feels like, but they’re not a headset that you want to spend much money on.

The next heaviest are the open-sided headsets that basically look like a pair of sunglasses. These are also extremely lightweight, and, as a plus, fold up into your pocket. These are the viewers that you would carry around with you, especially if you want to show VR apps to other people.

One of my favorites is the GoggleTech C1-Glass, the black pair below at far left. Next is the Cobra VR, followed by the Homido Mini, the AntVR and the pink Baofeng Small Mojing. 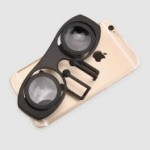 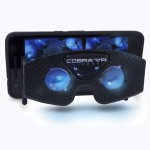 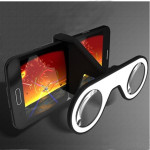 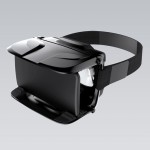 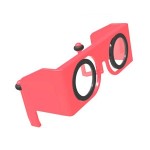 Fully-enclosed headsets, like the Samsung Gear VR, weigh more because there’s more substance to them. These headsets weight anywhere from 1 ounce for the GoggleTech to 5.6 ounces for the AntVR, which has top and bottom flaps and a headstrap.

The Gear VR below, for example, weighs 12 ounces. That’s before you attach the straps and insert the phone.

If you plan to wear the headset for any length of time, you’ll want headstraps.

Without headstraps, you’ll have to hold the headset up to your face. The open-sided headsets typically don’t come with straps, while the cardboard ones are available both with straps and without.

The fully-enclosed headsets typically all have straps, with the big exception of the Mattel View-Master. That set is primarily designed for children, and the idea is that people don’t want kids to spend too much time in virtual reality.

If you wear glasses, or have friends or family members who do and plan to share the headset with them, you’ll want a headset that’s wide enough to fit over them. The Mattel View-Master, for example, does not, and neither does the Shinecon VR. The Samsung Gear VR does, and so does LeNest and the Baofeng Mojing 3.

There are typically two ways that lenses can be adjusted on virtual reality headsets.

First, the distance between lenses — the interpupillary distance can often be increased or decreased. If you have wide-set eyes, you’ll want the lenses further apart. If you’re a kid, you’ll want them closer together.

The other adjustment is the distance between the lenses themselves and the surface of the smartphone.

On the LeNest above, for example, each lens moves independently when you turn it in its socket. This is particularly useful when you have eyes with a different prescription for each — like I do.

There aren’t a lot of augmented reality apps on the market right now.

The Mattel View-Master does, but mostly as a sales gimmick. The Wizard Academy from Realiteer, however, uses the phone’s outward-facing camera to track a wand that you hold out in front of you.

Other uses for augmented reality include tracking if you have moved your head forwards or backwards, which current phone sensors don’t do. It can also be used to help you avoid walls and furniture, or to place virtual monsters into your actual home or office.

For example, the outside cover of the Mattel View-Master is translucent. When you look through the viewer at the company’s “experience reels” it looks as though objects — such as a space shuttle — float in the air above them.

Other headsets have either no outside cover at all, or have cut-outs in the cover to let the camera see out.

7. Fits over audio and power cables

Viewers that completely enclose the phone on all sides make it impossible to use headphones — or to plug in a power cable so that you can watch long movies without worrying about power running out.

You can see in the picture below, for example, that the outside cover doesn’t sit flush with the rest of the headset, but has openings on the sides, the top and the bottom.

As a bonus, the vents keep the headset cool and help prevent lenses from fogging up.

The Google Cardboard V1, the first one that Google released, had a magnet on the side that worked as a button — and constantly fell off. Plus, it didn’t work with all phones.

The second version of the headset had a capacitative touch button on the top. Basically, it let you touch the smartphone screen without having to open up the headset.

The open-sided headsets of course don’t have this issue at all — you can simply touch the screen itself to interact with the app.

Many other enclosed headsets, however, don’t have any buttons on them at all. They still work with the majority of Google Cardboard apps, since designers are aware of this problem and typically create apps where in-world interaction is based on looking at some button or object for a few seconds.

Other headset manufacturers bundle remote controllers with their headsets.

To be on the safe side, pick a headset that either has a built-in button of some kind, allows direct access to the screen, or comes with a remote.

Right now, prices are all over the place.

Open-sided fold-up viewers run from $5 for VR Fold on AliExpress to $22 for the GoggleTech — and hit every price point in between.

Viewers made of cardboard run from $1 all the way up to $30.

In particular, viewers that have been around for a while, or have well-known brand names and strong marketing behind them, like the $100 Merge VR, the $130 Fibrum, the $80 Homido and the $120 Zeiss VR One are priced high but, in my opinion at least, aren’t worth the money unless you really really like their looks and are willing to put up with a lack of key features.

Right now, there seems to be a sweet spot for virtual reality viewers in the $20 to $50 range. Some of my favorites are here, including the Mattel View-Master, the Baofeng Mojing 3, and the LeNest.

The companies behind them seem to be selling enough of them to both invest in innovation and to allow for lower prices due to volume sales.

For me, this is the single biggest factor when it comes to which headset I reach for when I want to try out a virtual reality app. Do I go for the headset where I have to take off my smartphone’s protective cover, then struggle to get the phone into the set?

I pick up the headset that lets me just slide the phone in.

Most of the open-sided light-weight headsets make this easy — the phone just drops into the tabs. The LeNest is also simple — the outside cover flips open, the phone drops in, the cover closes and latches shut. Very easy.

On the other extreme, the Freefly VR has an incredibly complicated multi-step mechanism to hold the phone in place. I actually had to look it up in the manual last time I used it because I couldn’t even remember how to get it open.

When a viewer has a complicated system for inserting a phone it also makes it difficult to switch apps, to pull up new videos, or to change settings since all of those functions currently require access to the phone’s screen.