By: Maria Korolov
With: 116 Comments

Despite the the absence of the Virtual Life grid and Avination in this month’s statistics, region counts, registered users, and active users all increased this month.

Virtual Life grid shut down without notice, and Avination is in the process of moving to a new hosting provider and could be down for another month.

The biggest land gainer was the non-profit OSgrid, which grew by 1,027 regions. Metropolis, another non-profit, gained 458 regions, and the commercial on-demand Kitely grid grew by 303.

For those who are new readers, OpenSim is a free, open source virtual world platform thatâ€™s compatible with the Oculus Rift. It allows people with no technical skills to quickly and cheaply create virtual worlds, and then teleport to other virtual worlds. Those with technical skills can run OpenSim worlds on their own servers for free, while commercial hosting starts at less than $5 a region â€” compared to $300 a region for the same land in Second Life.

Avi Brasil, the new commercial social grid from the company behind AviWorlds, gained 369 active users, bringing it to 375. AviWorlds itself lost 66 users, for a new total of 201 actives. Some may have moved to Avi Brasil,Â while others might have been distracted by the recent technical and communications problemsÂ suffered by Avi-Labs, the hosting company behind both grids. The two grids are now offering free regions to users, however, and both land area and active users may go up next month.

DigiWorldz came back from last month’s loss with a gain of 125 new active users. The grid has also had technical issues this summer, but reacted promptly and appropriately to solve the problems and communicate with its residents. The grid has gained users almost every month since its launchÂ last spring, and was on the of the fastest-growing grids last year.

Some grids were also better than others at bringing in new residents. InWorldz, a popular first step for Second Life users moving to OpenSim, reported 2,166 new registrations over the past 30 days. However, its active users fell by 177.

Meanwhile, the hypergrid as a whole is beginning to function more and more like one large grid, with an increasing number of multi-grid events, communities, and groups. 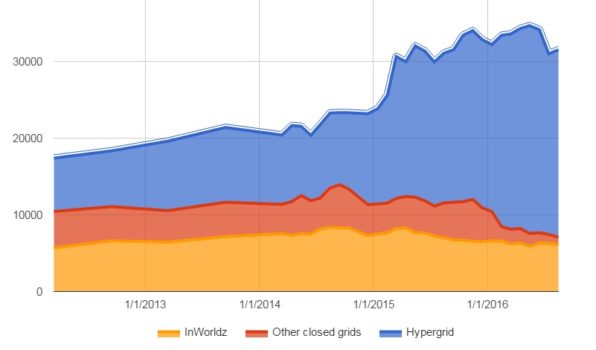 In fact, InWorldz now accounts for 86 percent of all active users on the closed grids. The 46 other closed grids have justÂ 969 active users between them, the first time this number has dropped below 1,000 since I started keeping track in March 2012.

A closed grid is one that does not allow its users to travel the hypergrid. Closed grids also typically run all the regions on their grids, while open grids like OSgrid, Metropolis, and Atek allow users to connect regions run by third-party hosting companies, or that they host themselves on home computers.

In the past, most commercial grids were closed but recently more and more grids have turned on hypergrid connectivity and enabled filtering of content, so that creators who want their products to stay on that grid can have that option.

The Kitely Market, OpenSim’s main commercial marketplace, hit new heights this month, with 8,006 products, and 15,084 product variations — 10,191 of which were exportable to other grids.

The Kitely Market currently delivers to more than 138 different OpenSim grids, both closed and open.

The Kitely Market allows merchants to group multiple variations of a product under the same listing. Those variations could be different colors, sizes, payment options, prices, or permissions. So, for example, a merchant could offer the same item for export to other grids at a different price.

As merchants have become more and more comfortable with selling content to the hypergrid, the number of exportable items has been climbing, while growth inÂ items that are non-exportable and can be used only on the Kitely grid has leveled off.

A note on statistics

I’ve been trying to automate more and more of the data gathering, in hopes of making fewer typing and copying mistakes and speeding up the data-gathering process as the number of grids increases. However, since all the grids display data in non-standard formats, this requires hard-coded screen-scraping — and if a grid changes its layout, the screen-scraping breaks.

Metropolis uses commas as thousands separators, which my computer can’t figure out. JamGrid shows zero active users — even though there are several people logged in right now. FarWorldz, Nemesis 3D, Refuge Grid, and Tangle Grid put the number of standard region equivalents on the pageÂ in a way that I can’t pull out without rewriting the script. Other grids generate the code for the numbers in such a way that it doesn’t show up in the HTML.

For an example of a great stats page, check out Great Canadian Grid’s info. The key numbers I’m interested in are the computed total regions, the total registered users, and the unique visitors from the last 30 days. The stats are on a page by themselves, so I don’t have to wait for the splash screen graphics to load. The data is clearly described and if you look at the HTML code, it’s nice and clean and easy to scrape.

There are many reasons why grids should publish their numbers. Most obviously, you get new inbound links every month, which is good for improving your search engine results. Second, it shows people are the grid is active and isn’t some abandoned, dead grid. Yes, every grid will have some bad months and some good months, but if you start out with a low number one month it’s easier to show high growth the next. Â New grids especially can quickly rack up nice growth rates if they remember to put up the numbers when they are still low.

If a grid has had some bad months, and stops publishing its stats, it’s like a giant neon sign that says, “we’re giving up.” A grid that keeps publishing them is saying, “we’re hanging in there, and we’re working to make things better.”

By offering a pared-down, clean stats page it makes it easier for me and for the other folks who want to gather these numbers.

Finally, the stats show that OpenSim is growing, which attracts more people to the platform. That’s good for all grids. Even if you only have a handful of users, your numbers do add up.

If you update your stats page, or the numbers that I’m pulling in are incorrect, please let me know, at [email protected].

We added five new grids to our database this month: Poqpoq, Ventureworldz, Sector 17, the space-themed gridÂ Trans Sidera, and the religious gridÂ Fellowship.

Some of these grids may have been down due to the summer holidays and will be back up next month.

Grids that have been suspended for more than two months will be marked as closed. If your grid isnâ€™t on the active grids list, and not on the suspended list, and is marked closed when it shouldnâ€™t be, please let us know.

And if thereâ€™s a public grid weâ€™re not tracking, please email us at [email protected]. Thereâ€™s no centralized way to find OpenSim grids, so if you donâ€™t tell us about it, and Google doesnâ€™t alert us, we wonâ€™t know about it.

By â€œpublic,â€ we mean grids that allow hypergrid visitors, or have a website where people can register for or request accounts.

The list below is a small subset of existing OpenSim grids. We are now tracking a total of 1,168 different publicly-accessible grids, 278 of which were active this month, and 203Â of which published their statistics.

The raw data for this monthâ€™s report is here. A list of all active grids is here.