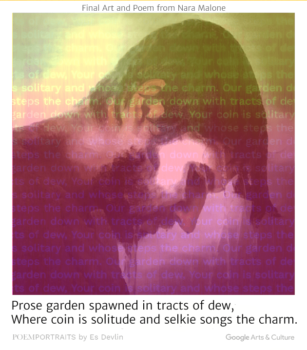 If youâ€™re a writer, or an artist you may cringe at the idea that computers are coming for your jobs. If you dig into how the content for AI art and poetry and stories are generated, youâ€™ll breathe a little easier. Iâ€™ve done just that using tutorials I found onlineÂ andÂ collaborative notebooks I found on Github. I compiled a text file of my novels and poetry and trained them using Googleâ€™s Colaboratory where it makes CPU and GPU available free for creators to experiment with machine learning.

Warning, this is addictive stuff. Well, itâ€™s addictive if you donâ€™t let all the tech speak and brain-twisting math get in your way. You donâ€™t have to fully understand the mechanics of a car to use one to get from place to place. The same is true of AI and machine learning. If you want to train an AI on your own input data just follow the tutorials and let the magic happen. Basically the computer reads through tons of text and learns to predict which words should come next by parameters the training code sets. Itâ€™s pretty obvious right off the top that the computer does not understand the context or meaning of the words.

This was generated by Googleâ€™s poetry generator:

My
transsexual
power in the rain,
The pig was seen, the little maiden was a son.

â€œPowerâ€ was the prompt word. The results are kind of like taking a fistful of magnetic poetry tiles and tossing them on a table and then organizing them into sentences.

And this came from the text generation project that OpenAI insists is too dangerous to release fully featured to the public:

If I listen long enough to you, youâ€™ll understand. And youâ€™re the only one whoâ€™ll understandâ€¦that you can be with meâ€¦â€
Beneath all those words, he realized the meaning. His heart clenched, his heart flutteredâ€¦
â€œYou can come, you can come again! Iâ€™m so sorry for having to put you through something like that. I wonâ€™t forget now!â€
Beneath all those words, he realized that even if he didnâ€™t speak, the tears wouldnâ€™t die! He couldnâ€™t hold back his emotions anymoreâ€¦
Iâ€™ll never forget.

The bold is the prompt I input. I think our jobs are safe for a few more months at least. Yet, just because AI text generators canâ€™t replace you is no reason they canâ€™t be helpful. The blank page and the first draft, sparking ideas, pulling dialog and narrative from nothing, are the lengthier and most mentally exhausting portion of writing. â€œTranssexual powerâ€ and â€œmaiden sonsâ€ might inspire an interesting character. If your narrative contains the words â€œHis heart clenched, his heart flutteredâ€ Feed that prompt to a text generator and see if it comes up with something fresh. I put it in TalktoTransformer:

Not great, but better, and something tweakable or to inspire your imagination into a new direction. So when your feeling stuck for an idea or just want to play with words to get into that creative mindset, try AI tools. And if building your own text generator isnâ€™t your thing, These two are compiled online and will get you started exploring how AI generators can inspire your creativity.

This is the poem portrait I generated with the prompt word â€œgardenâ€.Â  If you give permission your webcam will take your picture and deliver a poem shaped around that picture. I havenâ€™t seen a single poem yet where someone gave permission for their picture to be taken. I didnâ€™t think that wise either and soÂ I found this picture on Pixabay, used neural-style transfer AI on Picsart to get moody shadows, and then used some layer-masking in Photoshop to come up with my own version of a poem portrait after editing that original text.

My final poem inspired by the AI

My pen floats along the sea of invisible words,
A book in darkness growing layers
Like a pearl

Nara Malone
Nara Malone is an award winning novelist and poet. As a freelance journalist and writer, her feature profiles on women entrepreneurs and her romantic short stories have been published in newspapers, magazines, and digital publications.