By: Maria Korolov
In: Features, Metaverse
With: 0 Comments

Land area went down slightly but active users were up this month, thanks to the OpenSim Community Conference and holiday events.

These stats do not include most of the grids running on OutWorldzâ€™ DreamGrid distribution of OpenSim, or private company or school grids who used other installers. OutWorldz‘ FredÂ Beckhusen is currently tracking 2,171 installations of his DreamGrid software, which has seen average monthly growth of 28 percent since January.

A list ofÂ hosting providers is here. Download theÂ recommended Firestorm viewer here. And find outÂ where to get content for your OpenSim world or region here.

You can also add your grid in the stats if it is not being crawled by OutWorldz. OutWorldz also provides OpenSim users withÂ free meshÂ items,Â OARsÂ andÂ free seamless texturesÂ that you can download and use on your grids.

Top 25 most popular grids this month:

The actives list is based on active, unique 30-day user login numbers that grids report on their stats pages. Those grids that donâ€™t report their numbers might be just as popular, but we wouldnâ€™t know. The active user stats are also used to generate the popular hypergrid destinations list, which is useful if you have a hyperport and want to put up gates to the most popular grids, or include the most popular grids in an in-world directory.

This list is also a good place to start if you want to open up new stores or hold events, or are just looking for places to visit.

I measure active users by counting both local residents and hypergrid visitors. After all, hypergrid visitors attend events and spend money just like anybody else. If Iâ€™m looking for a happening grid, I want one with a lot of people on it â€” and I donâ€™t really care where their home avatar is based. In fact, several grids are encouraging users to have their avatars on other grids, such as Kitely or OSgrid, in order to reduce the load on their own servers. Many grid owners are also increasingly willing to rent land to visitors, and even give free store space and homes to visitors as well. Their money, after all, is just as good.

Yes, this means that people are double-counted, based on all the grids they visit. But theyâ€™d also be double-counted if they created new avatars on each grid. So it comes out even in the end, as far as I’m concerned.

Here some information onÂ how and why you should set up a stats page for your grid. Of course, not all grids need a stats page, especially grids that arenâ€™t open to the public, like school grids, private company grids, small family grids, and so on. From prior surveys, this â€œdark metaverseâ€ of OpenSim grids might actually be bigger than the one we know about, because those grids donâ€™t need to promote themselves, and we never hear about them.

A new grid launched this month, Fire and Ice, with low-cost regions and varregions.

The grid is hypergrid enabled, has Vivox voice, and uses Gloebits as its grid currency.

Holiday parties are planned for the end of December and start of January on many OpenSim grids, including the most populous grid, OSgrid.

OSgrid, a non-profit that allows users to connect home-based regions for free and is the main testing ground for OpenSim developers, is holding its party on December 27 on the Event Plaza region.

The hypergrid address is hg.osgrid.org:80:Event Plaza and the party will run the entire day, from 8 a.m. to 8 p.m. Pacific time. 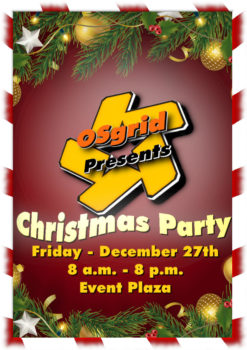 Tranquility Grid will hold Christmas parties on Sunday, Dec. 22, Monday, Dec. 23 and Tuesday, Dec. 24. On Thursday, there will be an ugly sweater party. All parties will run from 4 p.m. to 6 p.m. Pacific time.

The hypergrid address is tranquility-grid.info:8002:Winter Magic.

Tranquility is also increasing prices as of January 1, but there is a promotion on right now where customers can lock in lower region prices.

Littlefield Grid does a lot every year around the holidays and this year is no exception.

Littlefield has also set up its Christmas Island region for the season, and it is already open to the public and will runÂ  through January 5, with skating, sleigh rides, Santa’s Workshop, and more.

The hypergrid address is lfgrid.com:8002:Christmas Island.

Then the grid will hold a New Year’s Eve 2020 Formal Dance Party starting at 9 p.m. Pacific Time on December 31, hosted by DJ Walter Balazic, with dancing, drinks, food, party favors, free gowns and tuxedos for all guests, and a ball drop at midnight Pacific Time.

Kroatan Grid has been holding an Advent Calendar event on its region Eternal Ice for several years now.

But this year, the event is being held jointly with KiWo Grid, with a new gift each day on alternate grids, on the Eternal Ice region on Kroatan and the Season region on KiWo.

The event started on December 1 on Eternal Ice, said Kroatan owner Bink Draconia, and then the grids alternated, so that on December 2, the Advent gift was on Season in KiWo. “The last gift is December 24 on KiWo,” said Draconia.

Each of the two winter regions has an identical observatory building on it, each with 24 cubes — 12 with gifts, and 12 with landmarks to the other location. 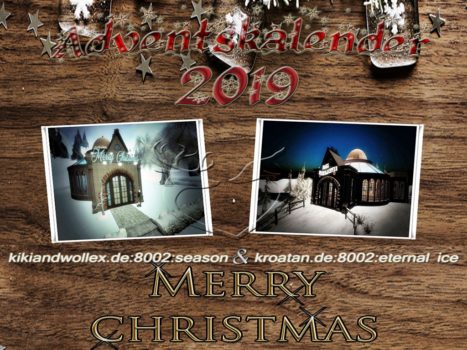 Tangle Grid‘s sixth annual Winter Expo began at the start of December and will run through Jan. 13, 2020.

The expo is fully accessible to hypergrid visitors at tanglegrid.net:8002:expo isle.

Visitors will be able to get freebie items, and also purchase content using theÂ GloebitÂ currency.

There will be ice skating at the skating rink, carousel rides, bumper skis, and more than two dozen creators from around the grid.

The hypergrid address is discoverygrid.net:8002:Seattle.

The skating rink will be the site of a Classic Rock night on Christmas Eve.

Then, on New Year’s Eve, the grid will host a musical event on the Virtual Seattle region, with DJ Jeff Jeff Edwards, DJ Kith Whitehawk and DJ Astoria.

The list below is a small subset of existing OpenSim grids. We are now tracking a total of 1,474 different publicly-accessible grids, 300 of which were active this month, and 239 of which published their statistics.

The raw data for this monthâ€™s report is here.Â A list of all active grids is here. And here is aÂ list of all the hypergrid-enabled gridsÂ and their hypergrid addresses, sorted by popularity. This is veryÂ useful if you are creating a hyperport.

You can see all theÂ historical OpenSim statistics here, including polls and surveys, dating all the way back to 2009.

Below are the 40 largest grids by total land area, in terms of standard region equivalents.

Am I missing anything? Did I get anything wrong? Email me at [email protected].

And please do forgive the lateness of this report. I was called out of town for a family medical emergency. Which, luckily, turned out not to be! Whew!