The folks over at HTC were nice enough to send me the new HTC Vive Focus 3 headset for review.

First of all, thank you. It’s a great headset.

Second of all, sorry for this review, but I don’t think that anyone should buy this headset.

On paper, this headset sounds great. Fantastic image quality. Great controllers. Wide field of view. It even fits over my glasses, though just barely. And it’s all-in-one, so you don’t have to connect it to you computer.

So let me tell you why you shouldn’t get it.

This headset takes up a lot of room. And is huge on your head. I wouldn’t want to spend a lot of time wearing it. 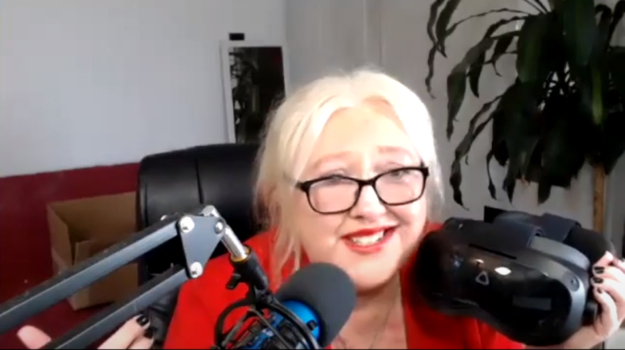 But what about enterprise users?

The Focus 3 has a pass-through camera. That means that you can hit a button and see through the headset’s camera to the world around you — to your keyboard, for example, so you can type something.

In theory, at least.

In practice, you don’t actually see the outside directly. You see a pixellated black-and-white image instead. It’s not good enough to see what’s on your computer screen.

So if, say, you’re using this headset for virtual meetings, and someone wants you to take some notes, or you want to pull up your calendar to see when you’re free next, or check to see if the email from the colleague has arrived, you’re out of luck. You’ll have to take off the headset to do any of that.

But maybe you’re using virtual reality to prototype objects. Say, you’re an auto manufacturer and you want collaborators from all over the world to meet in a common space to look at car designs.

That’s a great use for virtual reality. It’s an even better use for augmented reality, like the Microsoft Hololens.

All the other most common enterprise uses just involve watching 3D videos — like, say, architectural walk-throughs. You don’t need a bulky $1,300 headset for those. Any headset that can play 360-degree videos will work.

Finally, say you have a reason to use a high-end VR headset for work. Chances are, you only use it once in a rare while. I haven’t heard of any use cases today where people have to spend time in VR regularly at work.

For gaming, sure. For work? Not so much.

That means that when you pick the headset up again you’ll probably need to charge up the headset itself. And both of its controllers. And there will probably be some software updates to install.

With something like Zoom, which you use every day, there’s nothing to charge up. You don’t have to go hunting for the cables. And sure, Zoom occasionally has software upgrades but if you’re using it in the browser, you won’t even notice, and if you’re using the desktop app the updates are infrequent. You won’t have to run them every single time you log in, especially if you use Zoom several times a day, like I do.

When people ask me to use another platform, other than Zoom, I’m usually annoyed because odds are, whatever it is, it will have been a while since I used it last and I’ll have to install a software update and remember how to use it again. For a VR headset, that annoyance factor is going to be multiplied ten-fold.

This is why I don’t actually use VR headsets.

I love them. I love the technology. I’ve tried all the headsets out there, and I own several headsets. In fact, I’ve owned dozens, but have given most of them away. My long-term plan is to avoid dying by getting uploaded into the metaverse, Matrix-style. (My backup plan is to eat lots and lots of preservatives.)

I would love to have a reason to use VR in my daily life, including at work. So far, I haven’t found that reason.

I recently filmed a video with the Focus 3 headset with my friend Terrence Smith, one of the writers for our sister site, MetaStellar. He’s also a big nerd, and a video game reviewer. You can watch the video below: