With lack of Gloebit support, grids try to fix payment problem on their own

It’s been ten days since AviTron first reported Gloebit payment problems, and more than a week since Gloebit acknowledged the issue, but Gloebit purchases are continuing to fail across the hypergrid and grid owners complain that they haven’t been able to reach Gloebit CEO Chris Colosi for help.

There also haven’t been any additional updates on Gloebit’s Facebook page nor has Colosi responded to my requests for comment.

According to Discovery Grid owner Rene Vega, also known as Balpien Hammerer in-world, there are two aspects to the Gloebit payment problem. One was related to the Let’s Encrypt certificate expiration, which has since been addressed, and the other related to a breakdown in the Gloebit service where vending machines are not informed correctly when a payment has taken place. This second problem is still ongoing.

What happened with Let’s Encrypt

The Let’s Encrypt root certificate expired on Sept. 30. These certificates are used to encrypt Internet traffic. Let’s Encrypt had warned their users in advance to make the switch, but many companies had configuration problems, including Second Life, when the switch happened.

Discovery Grid‘s Vega has been running diagnostic scripts with his staff both on Discovery and on other grids to try to diagnose the issue.

“The first problem was that when Let’s Encrypt did their planned expiration of an old root certificate, that expiry invalidated all their security certificates,” he said, in a highly technical comment on our previous post. “But if the websites and grids had CertBot installed, that problem was resolved quickly.”

CertBot is an app from the Electronic Frontier Foundation, provided by Let’s Encrypt, that renews failed security certificates.

“This then restored access to Gloebit and transactions seemed to work again,” he said.

But CertBot is not set up correctly or if there is a configuration problem with how it is set up then the grid might be still using the old security certificate, he added.

So if the certificate is updated, then the Gloebit payments go through okay and the merchant gets paid, and the customer’s money is deducated from their Gloebit account.

However, the vending machines processing those payments are not being properly notified that the money has arrived.

“The script inside the object that does the actual delivery of the bought item is not getting its money event triggered,” said Vega. “So, when that tip jar is paid you’ll not see the ‘Atta boy, thanks for the tip’ message or worse you will not get those pair of shoes even though the merchant did receive the Gloebits.”

So far, he said, he’s run a diagnostic script to identify this problem on Discovery Grid, as well as on DigiWorldz, Kinky Haven, and Utopia Skye.

“We found that in these grids, though the Gloebit transactions completed, the script’s money event was not triggered,” he said. “What is interesting is that not all grids use Let’s Encrypt. DigiWorldz uses a RapidSSL certificate, on a totally different certification path, and that demonstrates the money event not triggering problem is not related to the Let’s Encrypt problem.”

That means that there’s a completely separate payment issue that Gloebit has, that has crept into the system at some unknown time in the past.

“I suspect all grids using Gloebit are having this problem,” said Vega.

Since Gloebit doesn’t seem to be taking this issue seriously, Vega is calling on the OpenSim community to do some diagnostics of its own.

“Try this yourself,” he said. “In your home grid, go to a Gloebit-enabled region. Drop the following script into a newly-rezzed cube. The script sets up a pay button, you touch it, click on 1G$ and you pay yourself that amount. When the money event is triggered the script will llSay that it got the money event.”

He warned that people shouldn’t do this too often, since Gloebit takes a 2 percent cut of each transaction. That means that even if you’re paying yourself, you’ll lose money — for every 1 Gloebit you pay yourself, you’ll end up with just 0.98 Gloebit.

“This is how Gloebits works, it’s not me doing that,” said Vega.

If the system works property, you should get the following message:

“If you do not see that chat then your vendors, tip jars, or rental boxes are not working,” he said.

Vega asked the community to report back on how the script is working, on different grids.

Here is the script:

I also have been doing my own ad-hoc Gloebit testing over the past few days.

I’ve teleported to Gloebit malls on several different grids, including DigiWorldz, and made donations, grabbed freebies, and tried to buy items.

Freebies were delivered to my avatar just fine, so the problem wasn’t with my avatar.Â And all the payments came out of my Gloebit account.

But I never received my purchases.

You can see my transaction history report below. 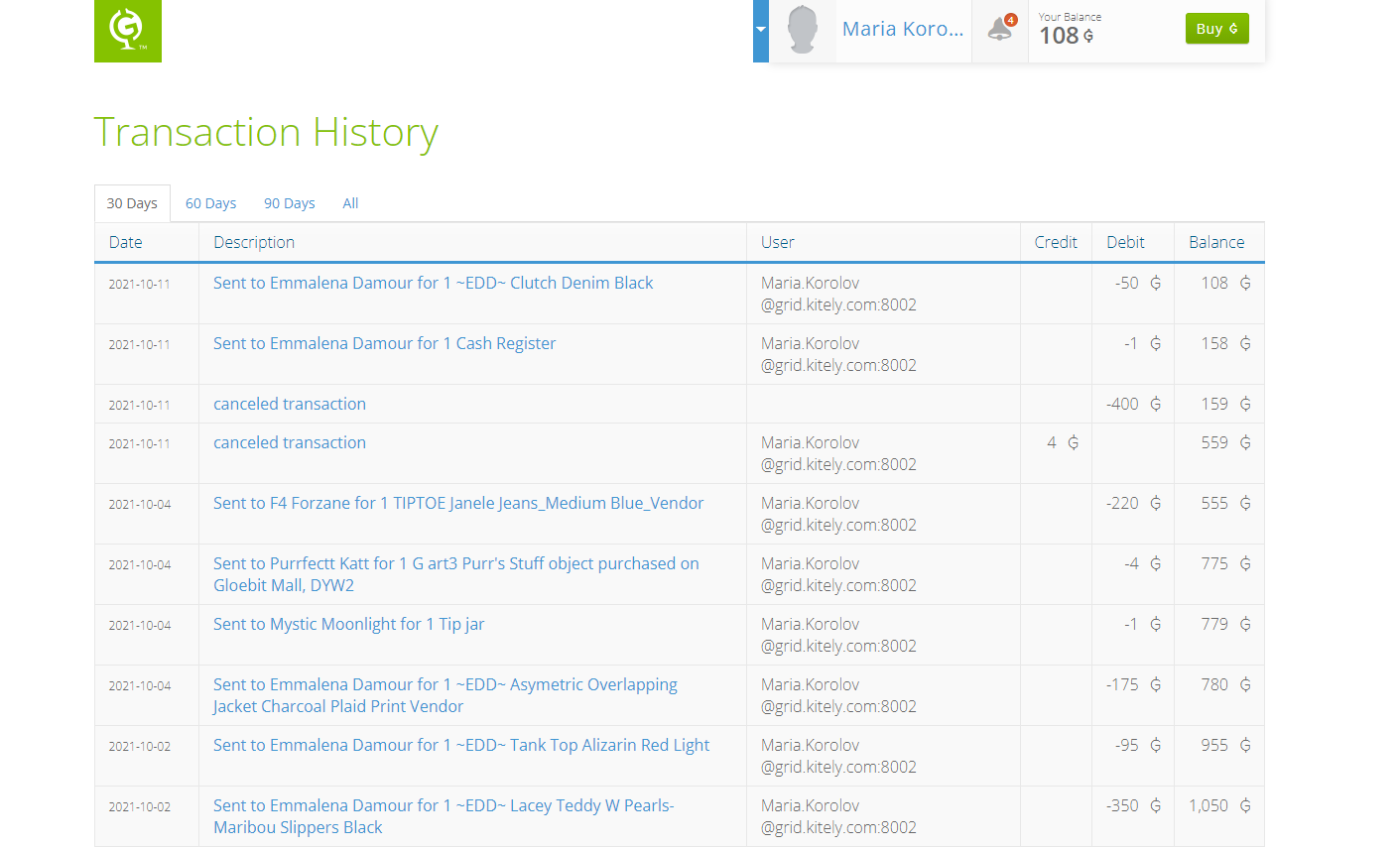 As you can see, I started out with more than 1,000 Gloebits in my account, connected to my Kitely avatar. I made purchases with several different vendors on different grids. Emmalena Damour, for example, is a mall on DigiWorldz.

The money came out of my account — but none of my purchases arrived.

There was also two “cancelled transactions” in my account this morning. I did not trigger it — I don’t know if a merchant did, or Gloebit did. I’ve contacted Colosi, but haven’t heard back.

One of those “cancelled transactions” deposited 4 Gloebits in my account — the other one withdrew 400!

Some grid owners have contacted me privately to say that they’re losing faith in the Gloebit system, and that they, too, have been unable to reach the company to get support.