Shakeups on the hypergrid

By: Maria Korolov
In: News
Tagged: OSGrid
With: 16 Comments

There was a lot of turmoil on the hypergrid this past month, as many smaller grids disappeared, and OSGrid did another round of cleaning.

OSGrid ran a dead region cleanup on May 8, taking about 3,000 sims off its map.

“I suspect a bunch of them will come back,” said OSGrid president Michael Emory CerquoniÂ â€”Â also known asÂ Nebadon Izumi in worldÂ — at anÂ OSGrid developers meeting last Tuesday. “A lot of them are placeholders or moats.”

And, in fact,Â after the cleanup, many OSGrid regions did come back, but the grid still saw a net loss of 1,393 regions compared to mid-April. 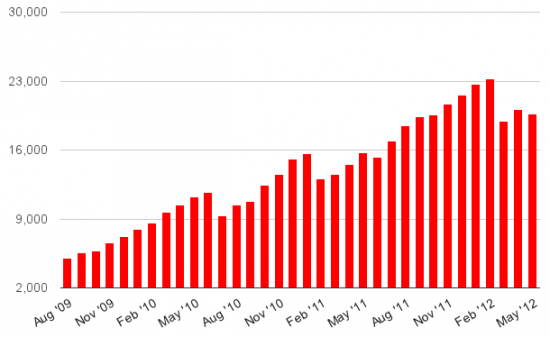 Two high-profile grids,Â DaseinWorldÂ andÂ Cyber Wrld, shut down. DaseinGrid was best known for its problems with its hosting company, SimHost, and later decided to run the grid on their own. They closed this past month for unrelated reasons. DaseinWorld founder Alexander Duncan hasn’t yet decided what he will do next.Â Â Cyber Wrld was known as the home for furries — and for Linda Kellie. Founder Timothy Rogers found himself swamped by the challenges of running his own grid, and moved the furry regions to OSGrid, instead.

Of those, Kitely was in the lead with 96 new regions, on the heels of continued usability improvements. Since April 15, Kitely has added support for groups, profiles, and offline messages. The grid also updated its server software, allowing it to offer NPCs, blamgates, and other features made possible with the latest release of OpenSim.

“The last month has been a good one for Kitely, with more people trying out our service, building their own worlds [regions], and upgrading to premium plans,” Kitely CEO Ilan Tochner told Hypergrid Business. “While most activity is still done in private worlds, you can already see more people spending time in public worlds. An organic community building process has begun and some people who previously focused on just building their worlds are starting to make friends inworld with other world builders. TheÂ Kitely Mentors Group now includes 30 members who have been helpful in getting new people to discover and understand Kitely.”

Next, Kitely plans to roll out in-world payments and megaregions.

Other leading gainers include InWorldz, which gained 74 regions, FrancoGrid and GridNirvana with 36, and Metropolis, which gained 35.

InWorldz and Avination are OpenSim’s most successful and popular closed, commercial grids. They compete head-to-head for users, content providers, and land renters. At this time last year, Avination was ahead of InWorldz in land area, on the back of a successful in-world and off-line advertising and marketing campaigns. Since then, however, Avination has beenÂ hemorrhagingÂ land.

InWorldz has also been pulling ahead of InWorldz in terms of active users, as the chart above shows.

Here are the ten most active grids this month:

Belgium’s Speculoos grid is unusually active — although it had 353 different active users this past month, it has only 38 registered users on the grid. The main reason? Hypergrid visitors who come to check out the grid’s fully stocked Linda Kellie freebie shopping mall. For example, the grid has been particularly welcoming to students from the EnglishGrid, which doesn’t have its own shopping area.

“Also, mostÂ SpeculoosÂ users have also accounts in other grids that they use often in ours,” grid founderÂ Gudule Lapointe told Hypergrid Business.

There were a total of 7,999 active 30-day users on the 72 hypergrid-enabled grids that reported their numbers this month. However, this does not mean that there are 7,999 different people on the hypergrid, since some people have multiple accounts. In addition, when a user of one grid makes a hypergrid teleport to another grid, they are counted in the active user numbers on both grids.

If thereâ€™s a public grid weâ€™re not tracking, please email us atÂ [email protected]. Thereâ€™s no centralized way to find OpenSim grids, so if you donâ€™t tell us about it, and Google doesnâ€™t alert us, we wonâ€™t know about it.

However, there are statistics for one popular version of OpenSim, theÂ Diva Distro, a four-region, hypergrid-enabled, pre-configured minigrid.

The Diva Distro has been downloaded 847 times over the past month. The total number of Diva Distro downloads now stands at 13,962. This does not mean that there are thirteen thousand mini-grids out there, however â€” someone might download the software but never use it, or download it once and use it to set up many grids. And it doesnâ€™t include the Diva Distros used as part of the popular, and super-easy,Â New World StudioÂ distribution of OpenSim.

Diva Distro is also part ofÂ Sim-on-a-Stick, a version of OpenSim packaged to run on a USB stick. According to Sim-on-a-Stick creator Ener Hax, the USB-friendly OpenSim package has been downloaded 807 times over the past month, bringing the total of these downloads to 11,282.

Meanwhile, according to data fromÂ The Hypergates,Â the number of hypergridÂ travelersÂ increased by 181 travelers, to 4,457, compared to the previous month, a record high. The Hypergates regularly updates the list of travelers, and if the gates to a particular grid is taken down, the users from that grid are removed from the totals. The total jumps madeÂ decreasedÂ slightly to 3,116 from last month’s 3,277, and there were a total of 39 grids on the network, the same as last month.

Not all hypergates are part of The Hypergates network â€” anyone can create their own hypergrid by dropping a script on any object, such as our touch or walk-through single-destinationÂ hypergate script.Â In addition, many people do hypergrid jumps without using any gate at all, simply by typing a hypergrid address into Map-Search. There is currently no way of tracking that traffic.

Our ownÂ HypericaÂ directory now tracks 88 grids that are accessible via hypergrid, up from 80 last month. This past month also saw 124 unique visitors to the Hyperica in-world hypergate terminals, up from 65 the previous month.

Meanwhile, Second Life lost 39 regions this past month, according to data fromÂ Grid Survey. Second Life now has a total of 29,968 regions, a decline of 1,417 regions from this time last year. The last time Second Life had this number of regions was in December of 2009. Second Life no longer reports active user numbers.

We are now tracking a total of 294 different publicly-accessible grids, 154 of which were active this month, and 131 of which published their statistics. Many smaller school, company or individual grids do not publish their numbers, and neither do SpotOn3D and OpenLifeGrid.

The raw data for this monthâ€™s report is here.

Latest posts by Maria Korolov (see all)
2012-05-15
Previous Post: Five tips for better provenance
Next Post: Why we switched from OMC to a local currency