By: Maria Korolov
In: Maria's Worlds
Tagged: LibOpenMetaverse
With: 12 Comments

Today, Second Life has the clear first-mover advantage when it comes to mixed-use social worlds, but consumer tastes change quickly. Just as Facebook has eclipsed MySpace, so some newer, flashier, richer world might come to eclipse Second Life.

What sets Second Life apart from all these potential competitors is that Second Life is only virtual world which is a part of a larger ecosystem, a hypergrid where goods and services can be shared between different worlds. 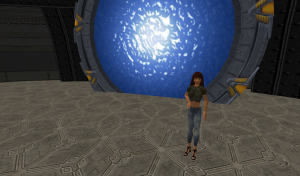 The OpenSim build can be visited with the same browser used to access Second Life — and the content that’s created on the OpenSim platform can be uploaded to Second Life.

That’s like being able to host your website with Windows Server or with the open source Apache server. For a business or school, the more options the better.

And users benefit — some of the finest content creators out there are frequently strapped for cash. A low cost platform can help artists, musicians, non-profit organizations, and small companies produce sites for the public to visit.

By being part of a broader ecosystem, Second Life can continue to remain relevant even as the world moves to the 3D Internet.

Without that ecosystem, Second Life might follow the path of America Online. AOL resisted the Internet at first, keeping up high walls to keep its users from venturing into the wilds of the World Wide Web. But now it’s just another Web portal. Its proprietary server platform ditched in favor of Web standards. And the high prices it was able to charge for “AOL Keywords” and access are now in line with prices elsewhere on the Internet. It’s become irrelevant, but at least is survived, unlike Compuserve and other, smaller competitors.

This is what will happen if OpenSim diverges away from the Second Life standard — or another virtual worlds platform comes along that’s better and easier than OpenSim and not compatible with Second Life.

Second Life needs to ensure that it stays in lockstep with OpenSim. Not by open sourcing its server software, but in joining with the OpenSim developers to create an official standard setting body for the Second Life/OpenSim ecosystem, by creating a new, ecosystem-wide digital rights management infrastructure, and, finally, by allowing goods and users to move freely between the two platforms.

Today, LibOpenMetaverse is the defacto standard of the Second Life/OpenSim ecosystem. This allows Second Life to benefit from content development, and browser development in the OpenSim community — and vice versa. Today, OpenSim supports almost all of the functions of LibOpenMetaverse — this summer, after two years in development, OpenSim reached 97% compatibility with Second Life functionality. The remaining issues mostly had to do with vehicle physics — and most of these have been resolved this fall.

Once OpenSim completely catches up with Second Life, what will happen next? Open source developers are a wild, creative bunch. Without the goal of compatibility hanging over them, they might well decide to go and invent something new — as the folks at the realXtend offshoot have already done, with their support for meshes.

A typical Second Life user who tries to visit a realXtend world won’t be able to see much of the content there.

Next year, Second Life plans to roll out support for mesh objects as well. It’s important to have a standards body in place to ensure that the platforms converge rather than diverge, to avoid forcing users to choose one platform over another.

A standards body might even come up with a decent way to show hypergrid teleport addresses — the current system, where every region has a different IP address, leaves much to be desired. What about something like: grid.com/regionname? Just a thought.

Neither Apache nor Windows Server are in the digital rights management business. At least, not when it comes to ensuring the copyrights of producers of HTML. If I put up code on my Website, any visitor can look at the source code and copy it on their own site. During the early days of the Internet, this allowed Webmasters to learn how to make Websites by examining the HTML behind their favorite sites.

In fact, early browsers encouraged this kind of copying by putting a “view source” option in the main menus. And this option is, in fact, still there in today’s browsers. (It’s “Page Source” in the View menu of Firefox.)

Website owners looking to protect their content do so the old-fashioned way — by putting a copyright notice on the screen and chasing down infringers. They’re helped by the fact that they can use search engines to dig up illegally copied material. But it takes work. Infringing sites have to be informed of the copyright violations and if the content isn’t taken down, copyright holders need to contact the hosting companies. If that fails, they have to call in the lawyers. It’s costly, but its the price of doing business. For trademark holders, it’s even more important to be vigilant — trademarks that don’t get defended are lost. This is why Rollerblades doesn’t make “rollerblades” — they make “in-line skates.” As they keep telling everybody.

Every content distribution system is liable for infringing content, and has to make good-faith efforts to take it down. This is why OSGrid and most other OpenSim-based grids have copyright and trademark protection policies in place — or are in the process of writing some. These policies usually include the immediate removal of infringing content from their databases and, if there are ongoing occurrences, the outright banning of violators from the platform.

There have been many attempts to create digital copyright management systems. But as almost any teenager’s hard drive will demonstrate, these systems do not work. Digital content needs to be consumed — and as it is being consumed by our ears, or our eyeballs, then it can be copied.

This is nothing new. Humans have been copying content since content was invented. It would be foolish to assume that virtual worlds will be able to achieve what no one else has.

However, by working together with OpenSim core developers — say, in the form of a standards committee — Second Life and OpenSim might come up with ways to make it easier to track content across grids, to create uniform permission standards, and to assign and transfer ownership of objects, scripts, terrains, and even entire regions.

Yes, individual OpenSim grid operators can still bypass built-in controls — these are the joys of having an open source platform. So, for example, those Chinese sites that show pirated movies and TV shows and distribute illegal MP3s and ebooks can expand their offerings to include prim hair and sex beds. Hopefully, before that happens, the Chinese government will figure out a way to improve copyright enforcement in the country. Though, if it does, I’m sure other countries will step up. Afghanistan, anyone? Just try filing a copyright violation suit there. Or maybe North Korea… But these sites are also notorious for viruses and trojans — free content comes with a substantial risk to the user.

A unified, cross-platform approach to rights management will make it easier for legitimate grids to track and enforce copyrights and trademarks.

With cross-platform digital rights management in place, Linden Lab will finally be able to allow movement of avatars and assets between grids running Second Life or Second Life Enterprise and grids running OpenSim.

Once that happens then yes, Second Life will have to lower land prices and improve service.

This will only improve the end user experience, however, and help ensure that the Second Life/OpenSim ecosystem survives and dominates the coming 3D Web.

And more companies will be willing to fork over $55,000 for a server license if their users can participate in a broader virtual world ecosystem as a result, with access to the broadest possible content and largest possible pool of potential visitors.

Having a larger ecosystem will help marginalize other, non-compatible proprietary alternatives, as well — giving Second Life some protection against well-funded, technically-advanced competitors.

After all, the World Wide Web, when it first came out, was a pretty ugly place compared to some of the proprietary systems in use at the time. But Web standards won out. Yes, sure, standards-based development is slow. It’s hard to get volunteer developers all on the same page, and it’s not always the best technology that wins out in the end.

But a large ecosystem, with products available at a variety of price points for all possible use cases, is the only one that will endure for the long term.