By: Maria Korolov
In: News
Tagged: OpenSim
With: 11 Comments

The worldâ€™s top public OpenSim-based grids slowed their growth rate this month, possibly due to the growing popularity of standalone grids. As of today, the top 40 grids totaled 11,240 regions, up 7.2 percent from 10,588 regions in mid-April. 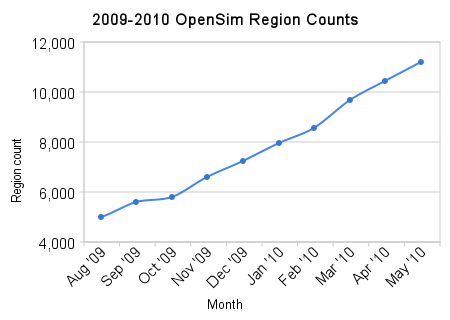 However, half of that growth was due to ongoing scalability testing on ScienceSim grid, which increased its region counts by 512 over the past month. Another big change from last month is that we’re no longer counting InWorldz as an OpenSim grid.

Meanwhile, private grids continued to gain, with the Diva Distro alone seeing 1,700 new downloads since the start of April, for up to 6,800 new regions.

One grid is bucking the trend, however, and leaving OpenSim entirely.

According to Elenia Llewellyn, cofounder and grid administrator at InWorldz, LLC, her company has decided to branch away from OpenSim, developing its server software in a new direction while also developing a new viewer.

While InWorldz is originally based off of OpenSim… we are no longer compatible to OpenSim,” Llewellyn told Hypergrid Business. InWorldz is not the first grid to drift away from the core OpenSim development path. Previously, OpenLifeGrid also cast off, and we stopped following it a few months ago.

By developing on their own, away from OpenSim, grids can offer their users better functionality, or specialized features custom-developed for the needs of particular niche audiences. The downside is higher development costs, since the grids will need to continue to stay ahead of mainline OpenSim in order to keep their customers. InWorldz regions, for example, start at $75 per month — three times the base price of ReactionGrid regions.

In addition, grids who split away from OpenSim and can no longer support access by standard OpenSim browsers will also not be able to support hypergrid teleports from the growing OpenSim-based metaverse.

For some users, this is a worthwhile trade-off. According to “Wayfinder Wishbringer,” of the Elf Clan Social Network, who does not give his (or her) real name, mainline OpenSim has failed to deliver some features that his organization requires, such as support for groups.

“Inworldz recognized OpenSim as a failing product and decided to start doing their own in-house dev work,” he said last week, announcing his group’s move from OpenSim-based ReactionGrid to InWorldz.

In addition to fully-functional groups, InWorldz also offers offline messages and inventory transfers and an in-world currency, he wrote, as well as fewer crashes.Â  “Elf Clan needs to go where progress is being made. That progress is obviously being made at InWorldz — and severely lacking at OpenSim.”

Accounting for these two changes lowers the effective growth rate of the top 40 public OpenSim grids to just 3.5 percent — the second lowest growth rate of this past year, and significantly lower than the 9 percent average growth rate. By comparison, Second Life grew just 0.4 percent during the past month, according to data from Grid Survey, and 8 percent since last August. OpenSim public grids grew 134 percent since August, when we first started tracking the numbers.

THE REST OF THE STORY

But growth in the public OpenSim grids is only a small part of the OpenSim growth story.

There are a number of private deployments underway, inside corporations and educational institutions, where the grids are only accessible from behind the enterprise firewall, or only to registered community members. There is no way to count how many of these grids there are, though OpenSimulator.org shows a total of 88,000 downloads of the OpenSim installer. This does not mean that there are 88,000 OpenSim grids — some people may download the installer, try it out, and then never use it. Others may download it once and then use it to run several different grids, or download a new installer to update their old version of OpenSim.

Trend numbers for OpenSim downloads are not currently being recorded, OpenSim core developer Justin Clark-Casey told Hypergrid Business. “It would certainly be nice to have these. It’s something that’s been at the back of my mind for a while but gets regularly buried under all the other high priority items.”

There are also several other installers for OpenSim, including pre-packaged installers provided by individual grids, and third-party OpenSim vendors have their own installers configured with options popular with their customers.

One of the newest, and most popular, installers for private grids is the Diva Distro, created by University of Irvine at California professor Crista Lopes, who also invented the hypergrid. Her version of OpenSim, which is a fully-configured four-region mini-grid with hypergrid access enabled, was downloaded around 1,700 times since the start of April. In addition, 800 grids have run the built-in upgrade utility since mid-March, she added.

WHERE THE GROWTH WAS

When it comes to the top public OpenSim grids, the non-profit OSGrid continued to lead this month’s growth numbers, gaining 206 regions compared to the same time last month. OSGrid allows anyone to connect a region for free, and also offers an automated region launcher, making it even easier for home-based users to set up their own worlds at no cost. It also has the biggest social community of any OpenSim grid, and counts many OpenSim core developers as members.

Weâ€™re also continuing to add new grids to our list. For example, the newly-launched PMGrid already has 56 regions, with houses and shops available for rental. Land is relatively inexpensive in OpenSim — even professionally hosted regions are a tenth the cost of those on Second Life, and we expect to see more themed grids in the future rolling out with large numbers of landscaped and built-up regions from the very start.

We’ve been asked to begin tracking user counts as well. Unfortunately, not all grids release those counts. There is also no way to independently verify user counts, while region numbers are simple to confirm.

Of those who do report the statistics, OSGrid gained 2,218 new users, for a grand total of 39,630 registered users, 5,010 of whom were active during the previous month. New World Grid reported the next largest number of users, with 7,133, and a gain of 342 over the previous month. ReactionGrid reported 5,012 users, with a gain of 238. The single bigger gainer last month was the Meta 7 grid, which attracted 507 new users, bringing its total user count to 2,720. For the complete set of the latest data on the grids that report their user statistics, see our chart here.

These numbers do not reflect hypergrid visitor counts. According to Wilder Westen grid manager Kai Ludwig, hypergrid visitors currently account for 50 percent of the visitors to his grid. We will begin tracking these statistics as soon as the OpenSim grids start collecting and reporting them.