SL Viewer 2 on the hypergrid

Second Life released Viewer 2 in February and, though many complained that the new interface was confusing and less efficient it did offer a significant new benefit to enterprise and education users: the ability to show websites and other media on any in-world surface.

However, the new viewer — commonly referred to as SL Viewer 2 — required changes in the virtual world software. OpenSim developers were busy working on a major structural revamping of their server architecture, and SL Viewer 2 compatibility had to be postoned.

The wait is now over.

The latest release of OpenSim, 0.7.1, includes support for SL Viewer 2, including the media-on-a-prim feature.

“This update is very good, believe me,” said Markus Maué (also known as “Hallow Palmer”). “Sim crossing is like cutting butter. The friends list works. We implemented the profile module.”

Grid4Us was one of the first grids to roll out the new release of OpenSim.

In addition to media-on-a-prim, OpenSim developers have also recently released a more secure version of hypergrid teleports, known as Hypergrid 1.5.

Media-on-a-prim works the same way in OpenSim as in Second Life.

First, the region you’re on has to have the latest version of OpenSim. Talk with your hosting provider about getting the upgrade, but you may want to roll it out on a pilot basis to start with.

Many grids are holding off updating until the new release is well tested and proven stable and reliable. Most grids today are running 0.6.9, which is not compatible with SL Viewer 2, nor with Hypergrid 1.5 — this means that folks on those grids can’t teleport to the grids running this latest release. Many grids are waiting until OSGrid — the largest grid on the hypergrid — updates to 0.7.1 before making the switch, so as not to cut themselves off from the rest of the metaverse.

Once you have the latest version of OpenSim running, you will need to configure SL Viewer 2 to access your OpenSim grid instead of Second Life.  If you don’t have SL Viewer 2 yet, you can download it here.

Add your login URI to the end of that line. Your hosting provider will be able to tell you what your login URI is. The end result will look something like this:

Now you should be ready to go. Log into your grid with SL Viewer 2, find a region where you can build, right click the land and select “Build.”

Put a plywood box where you want, stretch it out into the shape of a screen, then, in your build options choose “SelectFace”, click on the side of the box where you want to see your webpage, and then select the “Texture” tab in the Build window. The option to add a media URL will be at the very bottom, on the right — the plus sign. Not the most obvious place, sure. 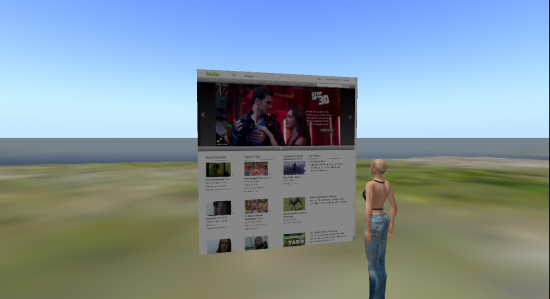 You will find that you can click on links on the webpage and they will be automatically loaded up — though this isn’t the fastest browser on the planet. But yes, you can watch YouTube videos here — or show a Google spreadsheet or presentation.

However, what you see isn’t what the guy next to you in the virtual world sees. If you scroll a website, or log into your online account, nobody around will be able to see that. So if you want to share what you see with others, you’ll have to stick with public sites, and avoid scrolling.

In the future, it will probably be possible for multiple people to share the same viewing session.

It is also possible to hypergrid teleport between grids with the new SL Viewer 2.

Simply hit Ctrl-M to bring up the Map dialog — or click on the World menu option on the top of the screen and choose “World Map.” Then paste your hypergrid address into the text box and hit the “Find” button.

You can also use a hypergate to travel between grids. However, most potential destinations aren’t yet running Hypergrid 1.5, much less the latest, SL Viewer 2-compatible version of OpenSim.

I recommend you check out Ellis Island Shops at hypergrid address: grid4us.net:9004 — a great place to visit, with a variety of shops offering low-cost and free clothing, accessories, scripts and other items. It’s a beautiful region, has a hypergate at its center, and accepts the multi-grid OMC currency from Virwox. OMC payments work fine with SL Viewer 2, and your OMC balance actually appears in your viewer, at the top right of your screen, even as you travel from grid to grid. Today, 14 grids accept OMC — but most aren’t yet on the latest version of OpenSim, so you’ll have to wait.