Many people see machinima as a documentation of the virtual life — a bridge that allows people not in virtual worlds to see and experience them anyway.
Â
Machinima could also have many uses in real life- in technology, education, business, law, etc. I invite everyone to think outside the box and make a list with me of how we can give machinima a more global use:

There is a big field called â€œlitigation animationâ€ where traditional animation companies demonstrate what the key witness experienced during some kind of disaster. So for example, a slip and fall, a hit and run, a shooting, etc. Obviously, without stunt dummies and a special effects team, this would be not possible to recreate. Hence, they use animation.

Machinima would be a much more effective use for these. WHY? Itâ€™s cheaper! We also have more resources to recreate this disaster happening from any camera perspective without limitations. There are builders who can recreate sets- whether it be a street corner or someoneâ€™s kitchen- and replicate every detail, to the point of where a pot of flowers stood at that moment of time. We have animators who can recreate the fall based on the description they are given. Machinima is a more effective solution because it would be cheaper to produce as well as more realistic to the witnessâ€™ descriptions.Â 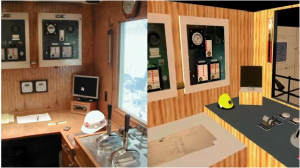 Many fields require workers to be in deadly scenarios. So how does one show these scenarios? Again, using real video would require special effects and stunt dummies. With machinima, you can have the workers be in the scenario and react to it accordingly, without dying in the process. With Second Lifeâ€™s advanced scripting methods, things like pyro technology and spills are easy to recreate.

These scenarios also donâ€™t just have to be in the manufacturing field, they can also show corporate scenarios such as customer relations and managerâ€™s training.

Television production often has the most intricate sets- think of all the flashy game shows, talk shows, news segments, etc. where it probably took a large team of top set designers to create. Now that 3D is the new craze and all the adults are going to see the Pixar animated films, it would be just as effective to show an animated set behind the real characters. It would definitely be more cost-effective and with Second Lifeâ€™s scripting effects andÂ just as flashyÂ — withÂ blinking lights, glowing prims, and so on.

So, help me add to this list. If you had a particular experience with integrating machinima into the real world economy- I invite you to tell us about your experiences.

Ariella Furman
Framed in 3D is an animation studio with over 10 years of filmmaking experience, both in the real and virtual worlds. The CEO and machinima director, Ariella Furman has been featured on the cover of Wall Street Journal for her achievements in animated brand messages. The Philadelphia Inquirer referred to her as "Pushing the envelope of what media can do."