The Sweet Smell of Desperation

By: Joe Essid
In: Columns
With: 6 Comments

As Linden Lab gradually loses landmass in its virtual world, as shown so graphically in Tyche Shepherd’s Grid Survey data, the Lab turns again to a dog it kicked repeatedly in 2010: educators. Hamlet Au broke the story that the Lab is “quietly” reaching out to selected schools and nonprofits who lost their 50% discount on the Lab’s exorbitant tier rates: come back, and you will get the discount again. According the Hamlet, the discount works as “a full private island for $1,770 per year, or $3,540 for two years.”

“Please, oh please,” Linden Lab might have added. Here’s why educators should reply with a firm “no thanks.”

Fairness to All Customers

Why should some educators get this discount, and not others? While vendors in education do offer volume discounts, it is unclear if the new educational offer applies to potentially large estates: a cap-and-gown version of the Lab’s Atlas Program.

I’d prefer across-the-board cuts for all customers, something the Lab apparently cannot do.

Focus on Entertainment, Not Business or Education

I’ve long felt we made a mistake in thinking that SL would be amendable to education. We educators thought of Linden Lab as just another software vendor.

When the educational discounts had existed in an earlier era of Second Life, the preferential treatment made sense, as educators were then a sort of “halo” customer for a product the purportedly would be a “disruptive” technology intent on changing the world.

Today, the Rosedale/Burning Man dream is long gone. SL, under CEO Mark Kingdon, tried to enter the enterprise market and failed, even as the Lab’s educational team was fired and the discount for educational and non-profit customers ended. I’d hoped that Rod Humble, with his impressive Electronics-Arts pedigree, would at least restore some sense to an unsustainable revenue model based upon extracting tier payments from a declining user base.

Instead, since his coming the Lab has clearly been milking SL, not even featuring it as one of four “shared creative spaces” on the Lab’s page that points to potential investors and employees. Meanwhile, SL has chased the social-gamer market, with advertisements looking more and more like IMVU’s. Marketing counts here. One look at the Lab’s images for “what is Second Life” show beautiful people often in romantic embraces. 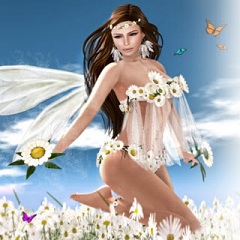 I really like this whimsical and sexy image by Strawberry Singh that the Lindens use as the default on their site’s home page, but it would elicit laughs in the classroom and worse in the IT conference rooms where purchasing decisions get made. It illustrates how far the Linden Lab strategy has shifted, and I don’t think a granting agency or IT department would look at today’s SL and say “here is your $150 per month, prof. Go play with Victoria’s Secret pixies.”

A Company and Platform Out of Touch With How Millennials Communicate

I polled my current section of 16 first-year students. Not one brought a desktop computer to campus, and only three own one at their home.

My residential campus is not typical today, with full-time undergraduate students who don’t commute. That said, many of my current students are also computer-science majors. They use mobile technology for everything: laptops for making content and phones plus, increasingly, tablets for communication. SL does not play well on many laptops with wireless and not at all on phones and tablets, barring a third-party viewing with limited functionality. The platform is wedded to the desktop computer that remains popular with the sorts of users who can swap out a video card on a weekend. Students can’t do that with laptops, and our labs, where desktops remain available, are not set up for that sort of on-the-fly upgrades.

No Sense of the Academic Year

>Like the sucker-punch of 2010 this current offer comes, once again, in the midst of the US academic and fiscal year. Budgeting decisions are tricky to time but don’t get made, short term, in March or October. The Lab needed to give educators more warning time in each case.

Fool Me Twice, Shame on Me

Why should we trust these guys? Here I will turn to a few educators who responded to Hamlet’s post. I called the treatment of educators a “buggering” and a wag named A.J. summed up the Linden offer as “Come back. Join our dying world again.” Ken Hudson, whose Border-Crossing project had attracted such acclaim before moving his work to Unity 3D, and, notably, still gets promoted on the official Linden Lab wiki, noted that “I love that LL believes we all forgot how they dicked us around. We didn’t.”

We’ve not forgotten, Linden Lab, the whip-sawing policies that marked the 2010 buggering. Many of us have moved on, and it’s likely my last-ever semester using virtual worlds for a class project.

So, no thank you and thanks for all the prims.

Joe Essid
Joe Essid directs the Writing Center at the University of Richmond, where he teaches courses in the departments of English as well as Rhetoric & Communication Studies. He holds a PhD in American Literature, with a specialization in the History of Technology, from Indiana University. As Ignatius, Joe can be found wandering Second Life or, as Iggy Strangeland, in Open Sim grids. He writes for Prim Perfect about grids beyond SL. He has published several articles about pedagogically effective ways to teach with technology in writing-intensive classrooms. He also publishes short work about gardening, history of technology, and sustainability. Ever a geek, Joe designs and plays old paper-and-dice roleplaying games. His at-times snarky blog, "In a Strange Land," combines these interests from Joe's perspective as neo-luddite who rides a bike, refuses to use a cell phone, works on a farm, yet thinks avatars provide an ecologically sustainable way of communicating and building immersive simulations.

Mike Chase - 1/19/2022
NFTs and blockchain key to metaverse future, crypto boosters claim
Assuming you're referring to the Activision acquisition It has nothing to do with crypto and NFT. Just media calling that because thats where the current focus is. And speaking of collapse I'm...