I beta-tested the latest version of the New World Studio today.

It took me exactly five clicks to have a new OpenSim-based world up and running on my computer. And the whole process took five minutes. Though probably half of it was spent taking pictures of my computer screen, resizing them, and saving them.

So here’s how it went.

First, I emailed Olivier Battini, who heads up the project, and volunteered as a beta tester for Windows. He’s also looking for Mac beta testers, so feel free to drop him a line if you’d like to test out the product on either machine.

He sent me a download link. I downloaded it, and unzipped it.

The software launched with a start screen showing just one possible option — Start 3D World. So I clicked that.

Microsoft Windows 7 asked if I wanted to allow access to the software. I did, and clicked on Allow access. Meanwhile, a bunch of stuff was being installed in the background. 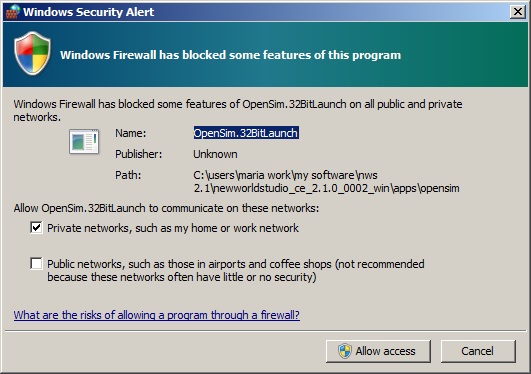 I wasn’t really paying attention, since I was trying to get a screen capture and kept pressing the wrong buttons. Fortunately, the Allow access screen came up again, and I had a second opportunity to grab the screenshot. 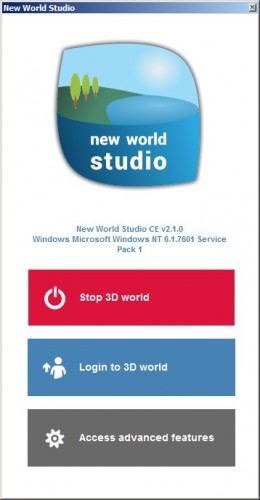 A moment of panic ensued as I realized that I didn’t know the avatar name, nor the LoginURI of the world, but while I was worried about this, New World Studio launched Imprudence, logged me in automatically, and started up the world.

Turns out, I didn’t need to know any of that stuff. 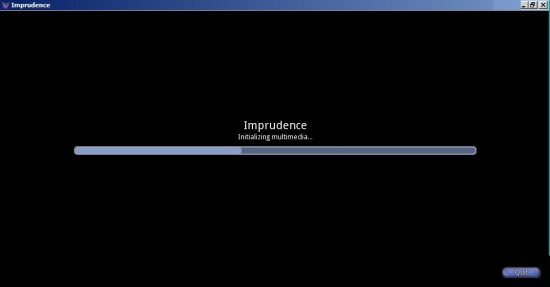 And there’s my brand-new avatar, wearing a hard hat, in what looks like the OpenVCE open source conference space.

I noted the time. Five minutes from start to end, five clicks — not counting the downloading and unzipping. Zero typing.

This has got to be the most streamlined OpenSim installation experience in the universe.

I shut down the viewer, clicked on Stop 3D world, and took a look at what I had installed.

The zipped file was 161 megabytes, a pretty hefty size. It unzipped to a 501 megabyte folder which had the NewWorldStudio.exe file and a couple of .ini files.

The NewWorldStudio.ini file includes some configuration details like the name of the starting avatar and its password and initial appearance, and the map position of the first region, and what region to start at. It also had “False” for “IsPublic” and “IsListed,” referring to hypergrid access and listing in the New World Studio directory.

I changed the “IsPublic” value to “True.” and started the world again. It started very quickly the second time around. But I couldn’t teleport out. Maybe this .ini file is only for the first time the world is run?

For the benefit of my readers, I erased the New World Studio folder and started over with the zipped file again. Two minutes to unzip, five minutes to launch the 3D world. Still no hypergrid connectivity.

Okay, what else was there? An Applications.ini file that listed the version of all the software used, and three folders — apps, avatars, and regions. The first folder, apps, contains all the applications that make up the New World Studio package — Apache, MySQL, OpenSim, the Imprudence Viewer, and the New World Studio launcher itself.

The avatars folder includes Benjiro, the guy in a hard hat, and three other starter avatars — Benjiro2, a hipster guy in a scarf and sunglasses; Cara, a blonde wearing jeans and a tight, low-cut sweater; and Cara2, a brunette in a long blue dress with open midriff.

I deleted everything and started over. This time, right after unzipping, I edited the NewWorldStudio.ini file to say Cara instead of Benjiro as the avatar name, and Mountain Retreat (LindaKellie.com) instead of OpenVCE as the starting region.

Then I took a five-minute break while it started up the world for the first time again.

And it worked. Changing the NewWorldStudio.ini file before running the software for the first time allowed me to change my default starting avatar, and load up a different starting region.

I was also able to change the name of my avatar by editing the “Owner” section of that file.

First, I want to say that if someone wants to be running their own virtual world on their own computer and has zero technical skills this is the hands-down best way to get it done.

Second, I want to say that creating a user-friendly installer — user-friendly anything, actually — is very, very difficult and thankless. Developers and power users don’t need an installer and will just complain about all the missing features. And there will be idiots who will still have problems figuring it out, no matter how idiot-proof you make it.

Third, I understand and support the fact that Olivier Battini is making more advanced features of his New World Studio available for a fee. If you don’t want to pay the fee, all the same functionality is right there, in the console, for those who want to get in there and type the commands.

The advanced features are a convenience, and a one-time fee of around US $20 for individual users is fine by me, especially if it encourages further development.

The fee might also encourage more competition, spurring other groups to create their own installers and management tools.

Finally, if you’re using this preview version of the New World Studio to create your own virtual world, edit the NewWorldStudio.ini file before running the software for the first time. Edit your avatar name, pick your starting avatar appearance, and choose your starting region and your starting coordinates. The current starting coordinates are 7000,7000 which are a nice round number. Since a lot of people are likely to have regions at those same coordinates, you wouldn’t be able to jump directly there, since hypergrid jumps don’t work unless you’re going to a destination with different coordinates. I’d pick something random but in the same general vicinity — like 7023,7019.

What I would change

That’s not to say that the New World Studio, as is, is perfect.

Here the top five things I would change before the final release:

1. Make the OpenSim console optional. Right now, the console is right there, running in the background, whether you want it or not. Advanced users will like seeing it, since you can use it to create new regions, load and save OAR region files and IAR inventory files, and do all kinds of other management stuff. But for typical users, the console is a scary sight. Make it invisible by default, and put an option to bring it up under an “Options” tab.

2. Make the choice of new avatars more explicit. Right now, by default, you get the Benjiro avatar. Switching to Cora requires editing a file, which most folks would not want to do for fear of messing stuff up. Giving a choice of starting avatars on startup would add to the complexity of the starting interface. Again, it could go under an Options tab. It would also be nice to change your avatar name without editing the NewWorldStudio.ini file.

4. Pick a different default viewer. I know that there are licensing considerations that might come into play here, but Imprudence is out of date and no longer supported. My current favorite viewer is Firestorm, which is actively supported, has mesh and media-on-a-prim, and is committed to OpenSim.

5. Provide a hypergrid option. Standalone worlds are fine for local building, but the real power of OpenSim is being able to teleport to other worlds — and having users from other worlds visit you.

I would argue that these five features be included in the free community version of New World Studio, and keep OAR and IAR imports and exports and automatic backups and other more complex actions for the paid premium feature set.

By adding the five features I mentioned, a newbie user would be able to do 99 percent of what they want to do in OpenSim without ever cracking open a console.

What I would especially like to see is the ability for organizations — companies, schools, non-profits — to create customized versions of this installer for their own users.

Some schools might want to use the Imprudence viewer, for example, because their hardware won’t support advanced viewers. Others might want Firestorm because they work with mesh. Or they might want some other viewer — say, one customized to be kid-friendly.

For example, I might want to a distribute a Hypergrid Business version of this installer, with a default region that has gates on it pre-set to take them to popular shopping destinations and to the Hyperica hyperport and a tutorial about how to travel the hypergrid. I would be willing to pay a license fee to do this, since it would help my readers, and promote my hyperport.