By: Maria Korolov
With: 11 Comments

If you rent land or own an OpenSim grid, you can now kick from your parcel or grid using your viewer, like in Second Life, thanks to code donated by Avination yesterday to the OpenSim community and expanded to include hypergrid visitors by hypergrid inventor Crista Lopes. 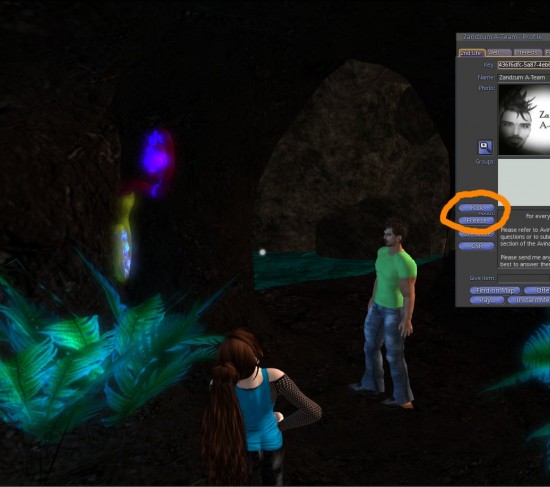 “But kicking and freezing worked at no level, neither parcel nor grid or region,” said Melanie Thielker, OpenSim core developer and owner of the Avination grid. “Only teleporting avatarsÂ home worked but if they had no home, that would do nothing.”

As a result, if a griefer was already on someone’s land, there was nothing the land owner could do except shut down the entire region.

“That’s not really a solution if you have a meeting or party going on,” Thielker told Hypergrid Business.

The technically inclined could also disconnect visitors using the OpenSim server console, but this option is not available to renters on closed commercial grids, and is also beyond the ability of average users.

Thielker added that Avination donated this code specifically in response to recent problems OSgrid had with griefers, which resulted in OSgrid cutting off hypergrid teleports to the Metropolis grid.

The code is already available for download from OpenSimulator.org, she said. “People can deploy it starting this moment. We expect it to spread far and wide with the next OpenSim release.”

Thielker said that code release is not connected to Avination’s plans to turn on hypergrid connectivity once the “export” permissions are fully developed and tested.

“This code is quite old, and not part of the hypergrid strategy,” she said.

However, the additional hypergrid functionality that was created by Crista Lopes will be coming in useful, she said.

“It will be taken into the Avination code base and will form one of the pillars of combining commercial grids with hypergrid,” Thielker said.

“We’re already in pretty good shape,” Lopes told Hypergrid Business. Lopes is also known as “Diva Canto” and is an OpenSim core developer and professor of informatics at UC Irvine.

According to Lopes, with her code fixes and the Avination donation, OpenSim users can now kick people out of their parcels. The folks kicked out can be both local grid residents and hypergrid visitors, and they will be moved to the outside of the parcels.

Grid owners can also kick people — both local residents and hypergrid visitors — from the entire grid.

In addition, users can permanently ban griefers from entering parcels, regions, or estates.

“Since 0.7.5 [the latest recommended release], we also have basic access control for the hypergrid in place,” Lopes added. “People can specify which grid they allow or disallow visitors from.”

In addition to kicking or banning griefers based on their avatar names, some grids also use other methods to identify these guys, such as their IP addresses,

“That is not done by OpenSim core, and probably will never make it there,” said Lopes. “That’s a grid management issue that requires tools beyond what the viewers can do.”

Commercial grids, for example, have their own mechanisms in place for keeping their grids safe evildoers.

But there’s hope for owners of mini-grids as well, even if they can’t afford to hire programmers to add these kinds of protections.

“I am working on such a tool as an addon to Wifi,” said Lopes. Wifi is the web-based grid management front end that comes free with the Diva Distro version of OpenSim as well as installers based on the Diva Distro, such as Sim-on-a-Stick and New World Studio. Â “It will be available within the next couple of months.”