Capitalizing on the excitement generated by the Oculus Rift, several other companies, both big and small, are jumping into the virtual reality headset market.

There’s a product that projects 3D images onto a special screen in front of you, one that projects 3D virtual reality right into your eyeballs, and one that allows you to slide a smartphone you already own into a head mount creating a kind of Oculus-on-the-cheap.

With cheap and fast motion sensors, high-resolution displays, and fast processors, we may finally have reached the beginning of the virtual reality revolution.

Here are the big players in this space.

This is the grand-daddy of them all, which launched a movement — and millions of YouTube video views.

The company behind it, OculusVR, held a Kickstarter last summer that brought in almost $2.5 million. Ten times its original goal. Clearly, there was a great deal of pent-up demand for virtual reality. Since then, $300 development kits have been flying off the shelves, and the company received a $16 million venture capital investment this past summer.

As of mid-August, more than 20,000 developers have bought the kits. You can see some of the games in development on Oculus Rift Share.

The way it works is that it puts a smartphone-like screen in a headset right in front of your eyes, with each eye seeing a slightly different image. As you move your head, the image moves as well. Since the Oculus Rift headset has a very wide field of view, you feel that you are actually inside a virtual world.

In the Oculus Rift there are two main functioning parts — the high-resolution display screen, and the motion detectors. But most of us already own that technology, in the form of our smart phones.

So the Durovis Dive takes advantage of that. It is a frame with lenses and straps. You bring the cell phone, install the game apps, snap it in, and play. They even have an open source version on the website, pictured above, that you can 3D print and assemble yourself — files and instructions here.

One advantage is that the computer and the motion sensors are right there, all next to each other, reducing latency. Get and iOS or Android-compatible controller and you’re all set to play immersive 3D games anywhere, on the cheap.

As smartphones get faster and even more powerful, this approach might actually become very successful. Though the frame design needs a little work.

The Dorovis Dive app store doesn’t exactly have the selection of Oculus Rift Share, with exactly three games as of this writing, but the roller coaster one looks like it would be fun to try. It’s supposed to be out this fall sometime, for under $100.

This is the Durovis Dive but with higher production values, and a successful Kickstarter campaign which just concluded today.

It works the same as the Dive — you load up the app, snap in the smartphone, and put the device on your head. Use it to watch 3D movies on a huge screen, or play immersive 3D games by using a Bluetooth controller. As with the Dive, there are only a small number of games available for it.

The InfinitEye is another take on the Oculus Rift, this time with the idea of making the field of view even wider. Oculus Rift creator Palmer Lucky has played around with wider fields of view before, but the resulting devices were literally too big and heavy to wear on your head.

But the Oculus Rift, while offering a better field of view than most of the devices I mention later on in this story, still doesn’t cover the full 180-degrees of human vision.

That’s where the InfinitEye comes in. The thing basically looks like two Oculus Rifts glued together.

Instead of dividing a single display screen into halves — one for the right eye, one for the left — the InfinitEye just uses two separate screens, and reduces weight by replacing regular glass lenses with Fresnel lenses, which are flat and made out of plastic.

Late this summer, the project team participated in a Samsung funding competition and made it to the top five, but did not make it to the final round. The project is not dead however, the company said, and work continues.

Most recently, the company published a demo video of the Death Star Trench Run as experienced through the InfinitEye.

The castAR team launched their Kickstarter today, and have already reached more than half of their $400,000 goal.

The way this device works is different from all the others in this list, since it is basically a miniature 3D projector that you wear on your head. It works in conjunction with a special reflective surface, which you can hang on a wall to watch 3D movies, or roll out on a table to play 3D games.

It also comes with a clip-on — which kind of looks like dark sunglasses lenses you might clip on to a pair of regular glasses. These transform the device into either an augmented reality system, where you can still see the world through them, but with added virtual reality features. Or they could transform the devices into a full virtual reality product, replacing an Oculus Rift-style display.

Right now, the glasses don’t block out your peripheral vision, so it’s unclear how immersive they will actually be. However, they cost less than $200 each for Kickstarter backers, so hurry up to place your order — there are only 30 days left.

Most other devices out there today differ significantly from the Oculus Rift and it’s little cousin the Durovis Dive in that they are not as immersive.

With the Rift, you can tilt your head down and see your arms and your legs or turn your head to see who’s creeping up behind you. With other devices, you see a square screen a few feet in front of you. If you tilt your head down, you’re now looking at a screen several feet below you. Some headsets also leak light from the sides, further diminishing any immersion you may feel. They may be 3D, but they are not true virtual reality.

The more impressive of these devices seems to be the Avegant headset, which makes you think that you’re looking at an 80-inch television screen eight feet in front of you. So, not quite immersive. But, according to reviewers, the picture quality is excellent.

That’s due to the fact that the picture is projected directly into each eye with an array of two million micromirrors.

Here’s the Engadget review of it:

It’s not available yet — the consumer version is expected out next year. But from the reviews I’ve seen so far, it seems to be more of a nice way to watch a movie on an airplane rather than a revolutionary new virtual reality product.

However, the technology it uses seems to offer an interesting alternative to the Oculus Rift’s approach, which is just a display screen right in front of your eyes. As a result, the reviewers say that the Avegant offers a more natural viewing experience.

Though it costs around $1,000 — three times the price of the Oculus Rift — and has a slick, futuristic view, Sony’s personal viewer doesn’t include motion sensors.

Instead of being inside a 3D environment, you feel like you’re basically looking at a large 3D screen in front of your eyes. If you move your head, the image doesn’t change. With a 45 degree field of view, it’s a bigger visual image than some other glasses offer, but it’s half that of the Oculus Rift’s 90 degrees.

For a another traditional — read, unsatisfying — take on virtual reality glasses, try the Vuzix Wrap 1200.

At $500 each, you get a significantly narrower field of view and lower resolution, so you won’t feel particularly immersed in the virtual environment. But, the glasses look cool.

Creepy, right? Those laser-beam-shooting sockets on the front are actually cameras. They take a picture of whatever is in front of you, then show that same picture inside the glasses, with the virtual augmentation added in.

I can see these showing up in a spy movie, but they look a little too creepy for everyday use. Plus, why not make the glasses transparent, just show what’s in front of you, and project the augmented stuff on top of that, the way Google Glass does? I guess one reason could be to make objects disappear so that, say, you could enjoy the scenery without seeing any billboards, or walk around a city center without ever seeing any homeless people.

Another cool-looking pair of glasses, the Zeiss Cinemizer OLED makes you feel as though you’re watching a low-resolution 40-inch screen from around six feet away, and it has generally received bad reviews. 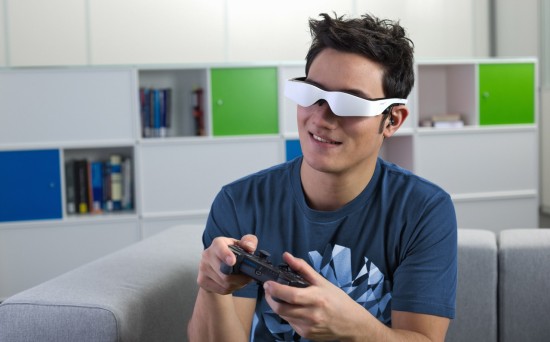 Although the company’s marketing language may play up the virtual reality aspects, this is not an immersive virtual reality headset. With a 30 degree field of view, it’s just another pair of video glasses — and one that costs almost $800, to boot, with another $200 for headtracking.

Snoots Dwagon - 9/15/2021
Caprica offers private grids starting at $20
Well your price is certainly low enough, and offering a Grid service rather than just regions or a VAR is a unique approach. So I wish you the best. In my experience, customers might find the 15k...

Luna Lunaria - 9/13/2021
StoryLink Radio hosts Halloween events, welcomes merchants
I set up my Cemetery there. So glad to be a part of it!

Leanda Darling - 9/11/2021
Enchanted Grid
its 100% nothing to do with Inworldz, its a closed Halycon grid because some of us like a closed grid. the owners for a start are English not one of them lives in America, And as for the the...

Fayre Scribe - 9/11/2021
Enchanted Grid
In other words, Enchanted Grid is a Closed Grid. Some creators prefer that, some go either way Open or Closed. Some go both ways. Population is slowly growing and familiar creators from IW and even SL...