“If we do fail, itâ€™ll be because human comfort hasnâ€™t been given the respect it needs,” he told the attendees on Sunday, the second day of the conference.

LaValle,Â a world-renowned researcher in the areas of robotics, sensor fusion, planning, and control,Â was a professorÂ University of Illinois, Urbana when he began collaborating with the Oculus Rift team more than two years ago. He officially took a break from academics and joined the company full-time in the spring of 2013.

He was introduced to the OpenSim audience by a friend from his academic days — Crista Lopes, the inventor of the hypergrid, an OpenSim core developer, and a professor at UC Irvine.

LaValle said that he was first drawn to virtual reality by the example of his grandmother and her sister, who were separated from one another after World War II.

â€œThey only got to see each other twice in 60 years after that,” he said. “I never really could get my grandmother to go back again. I thought wow, it would be really great for people to be distributed around the world, especially if they have limited mobilityÂ –Â imagine being able able to attend birthdays and weddings, for family members, grandchildren on the other side of the world.”

We’re getting close to achieving that now, especially since virtual reality doesn’t have to be perfectly realistic in order to be immersive and compelling.

“The brain is willing to accept a mismatch,” he said. As long as the degree of realism is adequate to the task the user is performing, that is.

There is still plenty of room for development, however.

Latency, for example, has been the most serious problem.

“When you turn your head the images you see should appear to be in the right places,” he said. Resolution also needs to improve, and there is still a lot of work left to do on input devices.

Even the full body motion capture peripherals that are being developed right now are not appropriate for every applications.

â€œWhat happens when we get lazy?â€ LaVallel asked. It can get tiring to interact with a virtual environment with full-body motion.

It is possible, however, to have systems that translate small real motions into big virtual ones — such as as the example of a mouse that is used to move a hand or an arrowÂ around a computer screen.

Other hurdles that need to be overcome include facial expressions.

â€œThe competition is going to be video teleconferencing, right?” he said. “You feel the presence of people there, can guess their mood or how much theyâ€™re paying attention.â€

The solution will very likely depend on the size of the device, and years down the line, he said, with no obvious answers yet. 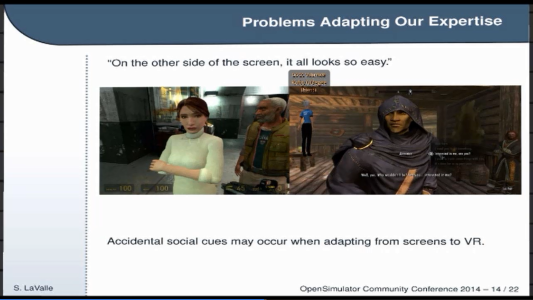 Multiplayer support is also a long-term goal, not an immediate one.

“Weâ€™re overwhelmed in many areas just getting a single person to be comfortable,” he said, explaining that while basic multi-player is possible now, it won’t be at a level he’s happy with for years to come.

LaValle declined to provide a release date for the consumer version of the Oculus Rift.

Samsung’s Gear VR will be out in the next couple of months, he said in response to an audience question, but the Oculus Rift is in the â€œletâ€™s say the many months scale. Sorry!â€

Next up for LaValle is a University of Illinois class on virtual reality, which he is teaching next spring. He is also busy setting up a research lab at the university for the Oculus Rift and for Facebook, which acquired Oculus VR earlier this year for $2 billion.

Watch the full video of his presentation below.

B.D. Ward
Brian Ward is a writer living in Massachusetts. He's studied professional and creative writing at Oxford University and UMass Amherst, and has previously written for Grace Ormonde Wedding Style Magazine and the book Jabberwocky.