I edited a mesh in Blenderâ€“and you can too

Last night, on In World Review, a major topic of discussion was how horrendously difficult Blender is to use. You can’t just install it and start playing around.

I tried, and it almost killed me. No obvious mouse gestures work. The menus don’t make sense. In fact, there are three different “View” menus on the home screen!

For example, one of the things we all would have liked to be able to do was to take an existing mesh and just tweak it a little bit. How hard can that be? I finally had to throw in the towel at 4 a.m. last night — I couldn’t even get as far as getting the mesh into Blender in a recognizable way.

But I’m not a quitter.

Today, I tried again, and again, and again, working through multiple tutorials, Googling around for the commands — did you know that keys have different effects based on where your mouse is hovering on the screen? — until I finally was able to take a public mesh, bring it in-world, edit it, export it, and successfully bring it into OpenSim and apply a texture to it.

Here’s what I did, and I hope this will save some people the two days I spent figuring it out!

If you just download Blender, install it, and run it, expecting it to just work — ha ha ha ha! No. It won’t work. Because it’s designed by crazy people for professional designers who don’t want amateurs like us to be able to edit mesh — otherwise, they’d be out of work. Â Like all those people who used to retouch photos for a living.

Until then, here’s aÂ quick summary of what you need to do the first time you use Blender:

If you want to know what all that did, you can readÂ Aine Caoimhe excellent and detailed explanation here. Or you can take my word for it that, until I did all that, Blender was completely unusable, and after I did it, things started to work!

So I went to Fred Beckhusen’s– a.k.a.Â Ferd Frederix — amazing Outworldz site and downloaded aÂ CC0-licensed wood fence, because I heard that landscaping supplies were the big sellers on theÂ Kitely Market. I unzipped the download, and saw that one of the files had a .DAE extention — that’s the Collada format that OpenSim users.

Then I clicked on File>Import>Collada (Default) (.dae), navigated through Blender’s really horrible file selector, found the file, and clicked on “Import COLLADA” at the top right. 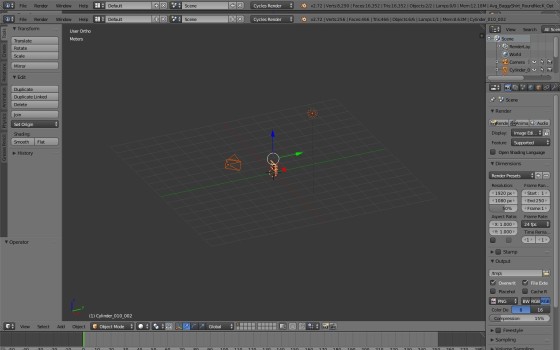 There was my fence — so tiny and puny.

3. Look at your meshÂ and move it around

Building in Blender is almost, but not quite exactly, unlike the building controls in OpenSim. There are some overlaps, just enough to give you hope that you can actually do something — but then the differences are major, and will destroy your soul if you’re not careful to take regular breaks to swear and kick things.

Here are the main camera controls I finally figured out how to use:

The fence itself is made of four separate pieces — the three horizontal beams and the vertical post. I click directly on a piece to select it, then used the arrows to drag it around — a lot like in OpenSim.

I moved the other sticks up and down a bit to space them out nicely.

Next, IÂ decided to actually edit one of the sticks to put a little bit more of a bend in it.

To do this, you need to select the stick you’ll be working on by clicking on it. Then switch into “Edit Mode.”

You can do this by clicking on the “Object Mode” button at the bottom of the screen and picking “Edit Mode” from the pop-up menu. That’s what I was doing at first, but you have to go back to “Object Mode” in order to move your camera around, and switching back and forthÂ gets annoying if you have to pull up the menu each time. Fortunately, there’s another short-cut — the Tab key switches you from one mode to other.

Would I have known how to do this by playing around with Blender on my own? No! It makes no sense! Arrgh! It took hours to figure this out! I had to keep Googling it and looking at documentation that was totally useless! Okay, now that’s off my chest…

Here’s the main things I learned from playing around with the mesh on this and another object:

I didn’t actually merge any vertices on this particular object — I just moved a section up a little bit on one of the horizontal beams. I had to swing my camera around to the back, to get the vertices I couldn’t see from the front.

There’s also a bunch of commands to subdivide and deform vertices, but that seemed like an advanced step. Maybe for a future day.

5. Get it from Blender to OpenSim

Now to get my new, four-beam fence into my world.

The first time I did this though, I only had one of the beams selected — and I wound importing a single stick into OpenSim!Â Ooops! It took a few tries, but I finally go it. In “Object Mode,” there’s a “Select” menu at the bottom left. Clicking Select>Select All by Type>Mesh selected everything.

Then in File>Export>Collada (default) (.dae), there are a whole bunch of options. Following more ofÂ Aine Caoimhe’s advice, I checked the following:

In other words, I checked everything except “Deform bones only.”

Then I found the folder where I wanted to save it, typed it a new file name, and clicked on “Export COLLADA” at the top right.

Now, over to OpenSim!

To import the mesh, go toÂ Build>Upload>Mesh Model then choose the file. Type in a new name for the object — for some reason, it doesn’t just use the file name.

Click on â€œCalculate weights & feeâ€ at bottom left of the Upload Model dialog window, then click on â€œUpload.â€ The mesh is now in your inventory.

Rez it on the ground, and stretch it out and position it the way you would any object in OpenSim.

Now, when I first rezzed it, it didn’t look particularly special — it was just white. That’s when I remembered the texture files that were in the zipped download. One texture file was for the horizontal beams, one for the vertical. I uploaded the images, and applied the textures.

Each of the parts turned out to be a separate item, all linked together into one object.

But then I looked around at the fence from the back and I noticed the little supporting branch stubs. There are only three little stubs — it looks like the middle two cross beams are just hanging in the air! I didn’t noticeÂ thisÂ when I was editing in Blender.

Nobody’s going to pay money for this fence now!

On the other hand, having gone through all this, I am now willing to pay anything — anything, I say! — for mesh objects designed by other people.

I only have one major regret. Over the past couple of days, I’ve tried everything I could think of to edit one of Damien Fate’s excellent mesh clothing templates, which are rigged so that the mesh clothing moves with your body. But during the process of importing them into Blender, editing the mesh, and exporting it again, somehow the rigging got lost and all I would up with in OpenSim was a useless — and super-tiny — shirt-shaped object.

Does anyone have any advice on editing and imported previously-rigged mesh? Trying to figure this out on my own is killing me.