Last Sunday we reported that Kitely Market‘s top-selling merchant,Â Ozwell Wayfarer, has made all this content exportable to other grids and has seen no evidence of bootlegging.

I have long been reminding content creators that closed grids don’t provide any additional security for content, except for scripted or rigged content, because it’s easier, cheaper, and faster for thieves to use copybot tools to steal content instead.

As a result, I have recommended that merchants with high-end scripted content may consider keeping that content restricted to closed grids, or to non-export permission settings, while they sell everything else on the hypergrid.

But now another top-selling merchant, Kayaker Magic, has stepped forward to say that he has had no problems with selling scripted content to the hypergrid.

The availability of exportable, high-quality rigged mesh content with proprietary scripts is a new development for the Kitely market, he said.

“Every time you mentioned selling exportable items you’ve always noted that rigged mesh and scripts where higher risk sales,” Tochner added. “I think that it will be a good story to show that this isn’t holding back the sale of such content by well respected merchants.”

He added that new merchants are, on the whole, more open to embracing selling exportable content than their peers when the Kitely Market was first launched.

“Thousands of hypergrid users have bought items from Kitely Market and have had them delivered to more than 120 different OpenSim grids so far,” he said. “This helps people accept what we’ve been saying all along, that if you give OpenSim users an easy way to get high quality legally licensed content delivered to their avatar then they will be happy to pay to acquire it. As time goes by, merchants are becoming more comfortable selling content which they previously only sold in closed grids or with no export permissions.” 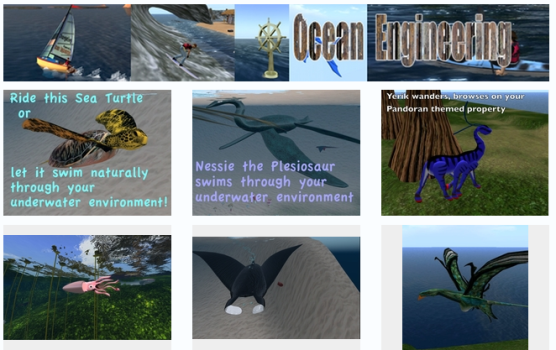 “I consider myself primarily a scripter,” KayakerÂ told Hypergrid Business. “I learned building and sculpt making and sound editing and animations and 3D modeling and texture mapping … only to support the scripts. I’m a water person in real lifeÂ so I started out making surfable waves, surfboards, kayaks and sailing scripts. But I keep finding other interesting things to do, the most recent being autonomous dinosaurs that you can hunt.”

He started out in Second Life, but has moved over entirely to OpenSim.

“I still have a store in Second Life,” he said, “But I rarely port anything new to there, all my best work is done in and for Open Simulator.”

He does admit that selling his content to hypergrid-enabled grids means that someone can steal the objects, together with their scripts, and give out copies to their friends.

“But I probably wasn’t going to sell many copies to them anyway,” he said. “If I let them convince me to not sell anything export, then I will be denying myself all the profit from all the honest people in the metaverse who are willing to pay.”

In addition, the crooks wouldn’t be able to provide support, he said.

“I think a big part of the value of what I sell is the customer support I provide behind the products,” he said. “You can’t steal that from me.”

The way he puts everything together also makes a difference, he added.

“If I just sold texture maps or mesh, I might be worried about them being copied,” he said. “But I make a mesh that is designed to be animated in a particular way by a script, design a texture to slide in a particular way over a mesh… The whole is larger than the parts, the pieces by themselves don’t have much value, and if you copy the whole thing everyone will see it was stolen.”

He added that the Kitely Market has been a great distribution channel for his work.

“I find that it is difficult to get people to come out to an in-world store and find my items,” he said. “While web-based searches help them find me.”