We’re not quite at the point yet where sports fan can put on a headset and enter the Olympics stadiums and virtually attend all events. Instead, what we got this year was short glimpses of what that future could look like — say, four years from now.

Meanwhile, this year, the footage was filmedÂ by theÂ Olympic Broadcasting ServicesÂ and typicallyÂ streamedÂ the next day.

Here are some examples of what we saw this year in virtual reality: 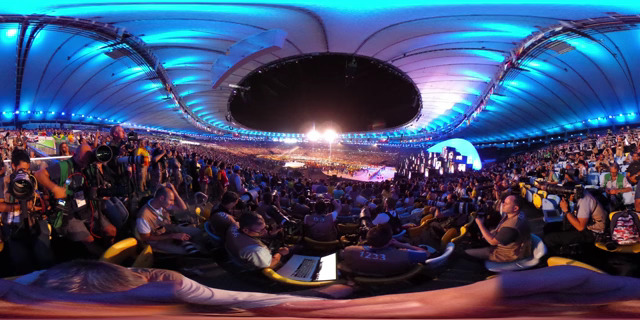 NBC Universal, a company that holds broadcasting rights in United States, streamed a total of 100 hours of virtual reality footage that included sports, in addition to the opening and closing ceremonies. The stream was available through the NBC Sports app for theÂ Samsung Gear VR.

The full schedule was available from the NBC Olympics website here.

U.K. users of iOS, Android and Samsung Gear VR headsets couldÂ view live 360-degree streams and event highlights of Olympics events daily through the BBC Sports 360 app courtesy of BBC, which also used this streaming for experimentation. Users needed to authenticate their cable or satellite provider to access the content.

It was also available for the Samsung Gear VR for people in Canada. Here is the full list of Gear VR Olympics apps for the various countries.

Those without aÂ virtual reality headset could also watch 360 degree videos on a browser through the CBC website.

The British Olympic team used 3D footage and 360-degree videos, created with help fromÂ VR-Vantage from BAE systems and UK Sport,Â to familiarize themselves with Olympic courses and venues such as those for the triathlon and canoe competitions.

The Museum Cidade OlympicaÂ — the Olympic City Museum — provided a virtual reality experience where users were able to virtually visit Deodoro and Barra, the locations for most of the events, and Copacabana beach, among other famous venues and sporting locations in Rio.

Step Into Rio: 360 Interview With Helen Glover is one example of 360-degree press conferenceÂ with athletes who competed in the Rio Olympics. Also check out theÂ 360-degree interview with Sir Steve Redgrave, a retired British rower who won gold medals at five consecutive Olympic Games.Â