Craft down for weekend maintenance, Genesis Metaverse back up 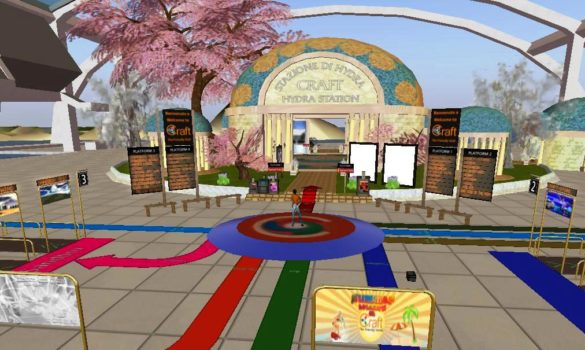 Craft World grid is down today for maintenance, and is expected to be back up in three days. Meanwhile, Genesis Metaverse has completed a major upgrade of its own and is back up.

Craft will get updates to its OpenSim software, updates to its groups and maps functionality, and users will see improvements in how trash is deleted, how payments are processed for rented regions, and fixes to inventory bugs and other minor issues.

The grid also plans to refresh the eight servers that have run without maintenance for years.

The upgrade happens every year in August when there are less users than in the winter, grid owner Raffaele Macis told Hypergrid Business.

“Some [inventory issues] are caused by the caches — both viewer and region caches,” he said. “We are going to add a button in our region administration web panel to clear the region cache when needed. Some inventory issues are about emptying trash, the system we use in the web account in a few cases fails, and we expect to fix it.”

The grid will also complete the migration of assets from the old assets system to a new system to reduce the time objects take to load.

“On October 2016, we moved to the FS Assets system for our assets, but we didn’t migrate all the assets from the old system to the new one, because it could mean closing the grid for a few days,” he said.

The update will also touch on refreshing and updating the OpenSim software that, although it will serve Craft World grid for the next five or ten years, it has reached its full potential.

Genesis Metaverse is now back online after a major upgrade to improve rezzing, teleporting, website security, billing and logins. The upgrade involved moving assets to a bigger and improved core system to increase system speed and increasing the DNS lookups to eight instead of the standard two to reduce failed logins, the grid said in a post.

Rezzing for mesh avatars is now faster and new estate members will not get freezing issues when they teleport in. There is also reduced failed login-attempts, grid owner Cliff Hopkins told Hypergrid Business.

“We’ve been getting 97 percent of members very happy on a vast improvement the grid is showing, teleports are much faster, members that were having a hard time logging in are now loging in once, much faster rezzing time for both avatar and estate,” he said.

A 20,000 prim standard region currently goes for USD $7.95 but the price will be raised to USD $11.95. All the other types of regions — Jaguar, Lynx and Tiger have been retired and and one offering called Evergreen estate, introduced instead.Â  Other types of estates introduced are Amur, Scenic and Siberian.

There is also a new VIP membership offering. The grid is adding a new level based reward and perks system for the VIP membership category with the bronze level in place and silver, gold and platinum levels to follow.

“We are adding in a level based system where members will be able to have multiple perks, for example, our â€œBronze Classâ€ is already up and running where for $2.95 a month members can have a free house pre built on a stunning estate named the Evergreen — as thatâ€™s tiger’s natural habitat so were playing on that so to speak with our estate names as they are all named after a certain breed of tiger (except the Sabre tooth), use of sandbox for bronze class only, plus a monthly stipend, plus a few more perks,” he said. “We well be adding in over the next few weeks Silver, Gold and Platinum Class.”

Users will now be able to buy and pay for land rentals through an online billing systemÂ without the need for a separate billing account. A number of other in-world features are also being worked on to make transactions, currency purchasing and the marketplace section much easier.

“GenPlace (our market store) is also getting an overhaul to be more streamlined and easier to navigate,” he said. “We are also currently testing the hypergrid delivery system on a test server (beta grid) we have.”

The grid has also added SSL support to their website to make it more secure and updated its customer gateway.