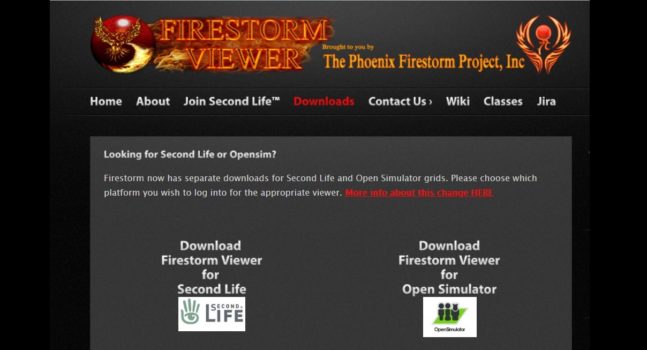 In July, the team behind the popular Firestorm viewer announced that they planned to split the Second Life and OpenSim versions of their popular virtual world viewer. But after seeing the reaction from the OpenSim community, the developers have reversed their decision.

“It made sense to split, but your points changed our minds,” wrote Jessica Lyon, CEO and project manager of the Phoenix Firestorm Project, in an announcement last week. “Iâ€™m reversing that decision and we will be returning to the way things were.”

That means that Firestorm will continue to support both Second Life and OpenSim in a single version of the viewer.

That will make life easier for people who use both platforms since they won’t have to switch viewers all the time. But there are some downsides, as well. In particular, due to a lack of OpenSim expertise on the Firestorm team, the development focus will be on Second Life.

“We are struggling in large part because we do not have, and cannot find, a dedicated OpenSim viewer developer with lots of time on their hands,” Lyon wrote.

In her post, she also mentioned the great disparity in users. According to Linden Lab metrics, she wrote, 542,967 unique users across 9.9 million sessions spending 17.7 million hours logged into Second Life on Firestorm over the last 30-day period.

By comparison, all the public OpenSim grids combined reported about 36,000 active users last month. However, this number does not include private deployments of OpenSim. For example, one OpenSim educator, “Xoyonline Chrome” said in a comment that they had 10,000 students in their private educational grid.

We only collect stats on the grids that decide to publicly post them. Most school and company grids do not. Firestorm itself does not collect usage metrics, Lyon told Hypergrid Business.

“We do not have tracking mechanisms in our viewer,” she said. “We wish to remain as transparent as possible and feel that the appearance of data mining, even if unfounded, is not worth the metrics. We know we have a lot of users on both platforms, actual numbers don’t mean that much.”

But the decision to prioritize Second Life is not about the metrics, she said.

“It certainly is becoming increasingly difficult and in some cases now actually impossible for us to remain compatible with both platforms,” she said.

For example, there are differences between the legacy Windlight approach to environmental settings, which is common in OpenSim, and Linden Life’s new Environmental Enhancement Project. Another difference is in estate management tools. Then, there’s Linden Lab’s new Love Me Render technology, while OpenSim grids will continue to use legacy baking.

“These are only current examples of things we cannot add switches to,” she said. “And none of the other third party viewers who keep up with Linden Lab will be able to either, unless they split their codebase to maintain two separate viewers as we initially had decided to do. This isn’t a Firestorm only situation.”

But most importantly, she said, it’s a personnel issue.

“We need a competent viewer developer who uses OpenSim,” she said. “Someone who is familiar with OpenSim caps and protocols, and understanding the politics would be an asset as well. I’ve been trying to find someone for years but have come up empty time and again.”

When the split was first announced there was one developer — Beq Janus — who was going to handle the OpenSim fork.

“However, she recently had some real-life developments which have dramatically impacted her availability to code for us,” said Lyon. “This was unexpected and out of her and our control and developed after we’d announced the split. Beq is also not a regular OpenSim user, so even with time she has a learning curve ahead in just familiarization with OpenSim. I need someone who knows OpenSim.”

Lyon added that Firestorm wasn’t making a choice between Second Life and OpenSim.

“My choice will always be to try our best to remain compatible with OpenSim because as I said in my post, we know there are enough users there to justify the effort,” she said. “This is not about user counts. It’s not that we don’t want to support OpenSim or are choosing not to. It is because I simply do not have anyone available to do the actual work.”

Latest posts by Maria Korolov (see all)
2019-09-24
Previous Post: Virtualife
Next Post: Metaâ€™s resurrection shows future of AR is in the enterprise