OSgrid, the largest grid in land area and active user numbers, will celebrate its 14th birthday starting on Monday, July 19. The celebration will run through July 25.

And to celebrate its birthday, the grid will give away free parcels in the OSGB14 regions where creators can showcase their best creations. If willing to build, you can contact admins in-world or via the website’s contact page to get a new parcel.

Most of the events will take place on the grid’s Event Plaza, at hypergrid address hg.osgrid.org:80:event plaza.

In addition to the exhibitions, there will be live music events, beach parties, and performances.

OSgrid is, the largest OpenSim grid, with nearly a third of the land area of all public grids combined.

Part of the reason is that it is an open, free-to-connect grid. That means that there are several OpenSim hosting companies offering low-cost regions on the grid.

Plus, anyone can also download the grid’s software and run a free self-hosted OpenSim region or regions on their home computer.

In addition to being the largeST grid in area, OSgrid is also the most popular, accounting for 16 percent of all active users on OpenSim’s public grids.

The grid’s LBSA Plaza region is the crossroads of the hypergrid. It’s the first place to stop by if you need any help with anything OpenSim-related. The hypergrid address is hg.osgrid.â€‹org:80:Lbsa Plaza.

There are also weekly meetings every Saturday where the general public can come and ask questions.

And, on Tuesdays, the grid hosts a regular meeting for OpenSim developers.

It is completely volunteer-run and supported by donations. 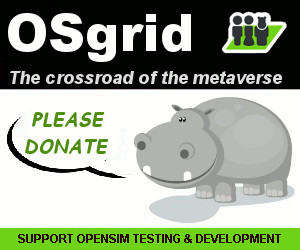 For many years now, the grid has been one of the original OpenSimulator-based grids dedicated to testing OpenSim projects. Many creations are shared for free in the grid and, over the years, it has become a haven for creators to unleash their ideas and designs, and has seen a strong social community evolve, said OSgrid president Dan Banner.

OSgrid residents with regions, plots, or shops they want to showcase are invited to share landmarks and builds on OSgrid’s birthday region.

The theme of this yearâ€™s celebration is â€œthe beach.â€

“Each year we usually go with a different random theme and this time for no particular reason it’s a beach theme,” he said.

LaNani Sundara from Creatix World grid started with about five regions in OSgrid in 2016 after the closure of the Kaneva virtual world. She uses OSgrid to create, run sims, and host regions for other people. Some of the most memorable residential places she ever hosted are Le Dias and Hipster Friends for their fairy tale stuff and amazing builds.

“Building is much easier here,” she said. “On Kaneva you could not import stuff as easily and, for example, you could only rotate things in two dimensions — not three. So to have a leaning panel, say to build a roof, you had to import or buy one.”

â€œWe landed with 90 or so ex-Kanevians on OSgrid, many left by now, or moved all over the hypergrid,â€ she told Hypergrid Business. â€œWe came clueless and in need of land. I am a computer science engineer though, so I figured out how to set up sims and regions for us refugees to gather and, slowly, we learned and people found their way. I still host land for mostly ex-Kanevians. That was what inspired me.â€

“I am glad OSgrid was and is there for us when we needed a new home,” she added.

She has also used OSgrid for testing but currently uses the Creatrix World grid for her testing. After she is satisfied her code performs well, she deploys it on her 25 sims on OSgrid.

Sundara also hosts DJ’s music events every Wednesday and Friday and during fundraisers and birthday events. According to her, these events help people come together to raise funds and build items for OpenSim.

“The fundraisers are usually much fun,” she said. “They have great themes, auctions, and games. Great teamwork on those fundraisers.”

Caro Fayray, another OSgrid resident, started in Second Life in 2007 and then moved to OpenSim in 2009 but became actively engaged with OSgrid in 2012. She primarily uses the grid as a place to create and to interact with others and also as an escape from real life, she said, which is so necessary under present circumstances,.

OSgrid has become her home in OpenSim, she said.

“After becoming an addicted builder in my early years in Second Life, OSgrid has enabled me to realize many of my fantasies without the restrictions and funds needed for Second Life,” she told Hypergrid Business. “My daughter calls it my meditation. I can forget everything and lose hours while I build. I have also watched people come and go but the core community has grown stronger and there is now a group of residents who are very involved and ready to help newcomers.”

She is not a techie but is able to run regions hosted on a server at a friend’s house and managed remotely by a good friend in-world who lives in Canada. She also builds items for free distribution at the grid, including plaza decorations for events.

“Apart from my own regions I enjoy doing group projects and themed events,” she said. “One done recently was for the Virtual World Best Practices in Education conference event. A group of 11 artists were involved and the theme was Reconnaissance in Times of Darkness. I also enjoy helping to organize the auctions during the OSgrid fund-raiser. People donate stuff they have made and people bid real money on the items. This helps towards the running of the grids servers etc.”

She hails the grid as one that has dealt with trials and tribulations along the way, to survive and flourish as an entry point to OpenSim and one that is home to many residents.

“This was enabled by a very dedicated group of admins and developers who have worked so hard to make OSgrid what it is today,” she said. “Long live OSgrid and happy birthday.”