Today I stepped through a StarGate — several times — to travel between different grids in the OpenSim universe.

This may sound like no big deal but trust me, it is. It is like … yesterday, you could only visit the pages on your domain, and today you can go anywhere in the Internet. It was like… like when you used to have to dial up to get into AOL or Compuserve and then Netscape came along.

I’m not exaggerating here. Until just a few months ago, virtual worlds were all isolated from one another. There was Second Life and its various clones. There was World of Warcraft and all those role-playing games. And there were a variety of online worlds that are little more than chatrooms with animation. I’m not going to dignify them by naming names. You know who you are.

They all attract their own niche audiences. And many make money — some make quite a bit of money.

But they are all isolated from one another. You can’t take your he-man from World of Warcraft into Second Life — you’d have to recreate him from scratch. And all his possessions.

Now, everything is different. Remember this moment. You will tell your children about it someday.

You can now put a virtual world on your server — even on your laptop, if you have a high-speed Internet connection and never plan to turn the thing off.  And you can host it, the same way you would host a web site. And anybody can come visit it.

There are a variety of open source projects that enable you to do this, just as there are several types of programs you can use to create a website. The one that seems to be gaining the most traffic is OpenSim, backed by IBM, Intel, and Microsoft. And there are a variety of browsers you can use to access these virtual worlds, including Second Life’s own browser, but an alternative called Hippo seems to be the browser of choice for the OpenSim crowd.

It’s all still in the early stages, still buggy. But despite the frequent server crashes and other weirdnesses, the platform is ready for use. Maybe not prime time use. But use. 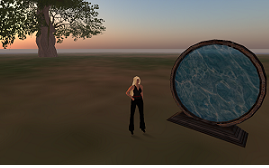 Take, for example, Edy Rau. I wrote about him previously (Three Worst Second Life Business Plans). I talked about how he and others like him are destroying the business models of Second Life land barons by pulling up stakes, leaving Second Life, and creating their own virtual universes.

The virtual universe, or grid, that he moved to is called Grid4us. It’s designed for people who love folk music and German village architecture. It’s beautiful and quaint and you can go there now and listen to folk music. Edy Rau’s cafe lives on this grid, which is hosted by some folks in Germany. It’s a tiny grid, just 12 regions, with each region a square about 16 acres in size. Or about 16 football fields, more or less.

But my virtual home is on the OSGrid, a totally different virtual universe. My eight-acre parcel of land lives on the laptop of a guy in California (thanks, Chris Greenwell!).

In order for me to visit Edy Rau’s Folk Cafe, I had to log into my OSGrid account (free subscription), using the Hippo browser (a free download). Then I teleported over to the Sunred Village, which also on theOSGrid. Since Sunred Village is in the same universe, I could have walked or flown over. But OSGrid is a very, very large world. It would have taken a long time. (Not all of it is on Chris Greenwell’s laptop. In fact, most of it is distributed among other people’s computers, which are linked together into the grid.)

In Sunred Village, there is a StarGate. Stepping through it, I was teleported across worlds, to a differnt virtual grid, Sunred Hyper. This was a tiny virtual world, just an island really floating out in space all by itself. But it has more StarGates. One took me to my destination — Grid4us.

To get to his world more directly in the future, I might install a StarGate on my own property. But I’ll wait — one of my neighbors might install it first, and open it up to the public.

After successfully making the trip once, I took a business friend along with me on a second trip, Michael Connolly, who runs Shanghai Expat. Connolly is in China, and he’s thinking about setting up his own micro-universe for expats in Shanghai. He already runs the country’s biggest Internet portal for expats — it’s a natural evolution of his business.

Connolly has server space to spare, and he’s incredibly tech-savvy.

He’ll need to be, at the beginning, to get everything working.

Of course, I could have avoided the whole StarGate trip if I had created an account on the Grid4us server, logged in, and built myself a new avatar. But the great thing about the StarGates was that I count take my virtual persona with me — along with my wardrobe and hair. Looking good is important.

Here are some more pictures from Grid4us.

Edy Rau (left) and Hallow Palmer (center) offer to give me (seen from the back) a tour of  Grid4us.

When I took the StarGate in, I landed at the airport, from where I could take a local teleport to places in the Grid4us world.

Edy Rau took me to his cafe. There was folk music playing, but no live performers today — on break for the Easter holiday.

Before I left, I went sightseeing in the German village.