Two more grids have switched to the recently-released hypergrid-enabled OMC (Open Metaverse Currency) from Virwox, FrancoGrid and Avatar Hangout, bringing the total number of grids using the currency to six.

The other four grids supporting the currency are Grid4Us, GermanGrid, OpenNeuland, and WilderWesten. Between them, the six grids total over 600 regions and 4,000 local residents.

All six grids are hypergrid-enabled, meaning that both merchants and shoppers can visit from any other hypergrid-enabled grid — including those not supporting the OMC currency — to do business.

FrancoGrid is currently testing the system before rolling it out grid-wide, said Gill Beaumont, one of the project managers for the grid.

One alternative would have been to implement a grid-only currency system, which would have involved running a central grid economy infrastructure.

“We chose OMC because we don’t implement the economy in the grid server,” he said.

According to FrancoGrid co-founder Vincent Exertier (“Vinc Sonic”), the terminals are currently up on the Toulouse,Â  Cannes, and Toulon regions. Full list of OMC terminal locations is here. 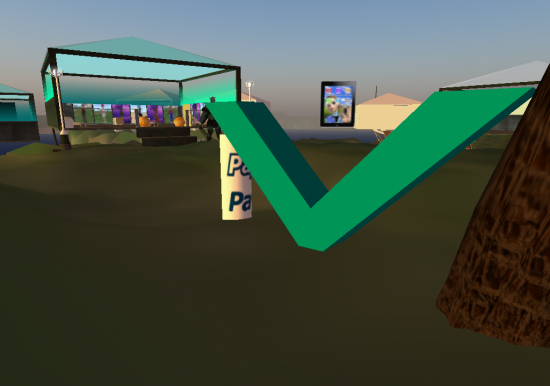 There are other multi-grid OpenSim currencies, such as CyberCoinBank’s G$, and many grids offer in-grid currencies for the use of their members.

OMC stands out in that it is fully integrated into the browser — merchants and residents use it the same way they do Linden dollars in Second Life, and account holders’ balances appear in the top right corner of the browser. In addition, OMC is fully convertible with US dollars, Euros,Â  and other major currencies, as well as with Linden dollars.

The currency is truly cross-grid and hypergrid-friendly — the functionality is available to users whenever they are on an OMC-member grid.

OpenSim does have security challenges unique to the platform. In Second Life, all regions are operated and controlled by Linden Lab — there is no way for region owners to interfere with the payment process. In OpenSim, by comparison, many regions are operated and controlled directly by organizations or individuals — anybody can download and run the server software, and some grids allow connections to any region owner. Region owners can install server-side software that can listen in on or interfere with message traffic through the region.

As a result, for added safety, OMC users making transactions get a pop-up website where they can confirm the transaction in a secure interface.