As businesses look to cut costs, one technology that they have begun adopting is the use of 3D virtual immersive environments or virtual worlds to hold meetings, trade shows and even conduct training. This is all done with users who log into these environments as avatars. An avatar in a Virtual Immersive Environment is a rendering of a computer user as an interface technique. Instead of moving around a computer interface as a mouse, one moves around as an anthropomorphic figure.

Often business people don’t give the look of their avatar a second thought and, in some cases, avatars are just assigned to an employee with out any chance to customize or change the avatar. However, it turns out that the appearance of an avatar can impact the person behind the avatar in some pretty dramatic ways. Businesses, especially those involved in negotiation, need to think carefully about some recent research released about the impact of avatar appearance on in-world and physical world behaviors. 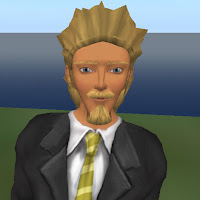 Research on Avatars
Here are some points from an article titled Promoting motivation with virtual agents and avatars: role of visual presence and appearance by Amy Baylor.

1) An experience as an avatar can change a person’s real life perceptions. In a study conducted by Yee and Bailenson (2006) It was found that negative stereotyping of the elderly was significantly reduced when participants were placed in avatars of old people compared with those participants placed in avatars of young people. Another study revealed that people who’s avatar wore black or dark colors demonstrated negative or anti-social behavior in team situations and in individual writing assignments. (See Research shows avatars can negatively affect users)

2) Watching an avatar that looks like you performing an activity influences you to perform a similar or same activity in the future. In a study, users watched an avatar that looked like them exercising and losing weight in a virtual environment, the result was that those that watched the avatar of themselves subsequently exercised more and ate more healthfully in the real world as compared to a control group. This as reported by Fox and Bailenson (2009).

As study by Ersner-Hershfield et al. (2008) found that when college-aged students observed their avatar aging in a virtual mirror, they formed a psychological connection to their “future selves” and decided to invest more money in a retirement account as opposed to a control group.

A growing body of evidence is finding that strong behavioral and attitudinal changes occur as the result of being an avatar in a virtual immersive environment. The concept of the “Sense of Self” is a very powerful influence in the environment of virtual worlds.

There are both positive and negative business implications of the above research findings. On the positive side, the fact that 3D virtual immersive environments can be used for effective learning and help promote behavioral change is exciting. The savings in travel costs, the ability to influence a learner and the ability to immerse the learner in a variety of realistic environments is encouraging. The learning industry may be very interested in promoting avatar-mediated instruction as a way of getting more return for the investment in training dollars. Organizations have for decades attempted to influence employee attitudes and beliefs through classroom-based instruction, incentives and policies and procedures. So the attempt to change employee attitudes or beliefs is not new or different. The goal of training in many cases is to influence a learner’s behavior. If a company can influence call center representatives to be happy and helpful, they may be able to increase sales or keep customers happy. Corporations spend millions each year to persuade employees that they need to behave in a certain manner.

On the negative side, subtle changes like the height of an avatar or the fact that an avatar may closely resemble and employee has the potential to cause real ethical problems. If a manager, for example, purposefully makes his avatar larger than his subordinate’s avatar, in an attempt to unduly influence him or her, it could be an ethical problem. Or if, in a virtual meeting with a client, the salesperson, decides that she wants to be taller than the client to “persuade” the client to provide a more favorable deal, then problem could arise as well.

This research points to the fact that organizations need to become more familiar with virtual worlds to avoid ending up on the wrong side of a competitive situation. The more companies dive into virtual worlds now and the more they explore, the better they will be prepared when the bulk of business and commerce is conducted in a virtual environment. Companies that take the time to invest now in finding out the different implications will avoid being taken advantage of when the use of these worlds for business to business transactions become more prevalent.

To learn more about virtual immersive environments for learning, check out this book:

Lannorra Sion - 5/12/2021
Gloebit payments are back, but trust is damaged
Agree. Gloebits (and Kitely Market export items) allow for a Metaverse economy. I have been a very active user of Gloebits at other grid's marketplaces. I also buy often from Kitely Market.

Rasputin Maximus - 5/12/2021
Gloebit payments are back, but trust is damaged
We need to observe that Dreamgrid installer is still offering Gloebits as a currency and being that so many people are using Dreamgrid it would be a mistake to jump the boat now. Gloebit did also...

Maria Korolov - 5/11/2021
Gloebit payments still down in yet another protracted outage
Jennifer -- Thanks, I've reached out to all the OpenSim grid owners to ask them what they plan to do now. Will they stick with Gloebit? Are they looking for another currency? I'll post the results in...