Happy birthday to the hypergrid, which turns seven today

On this day in 2008, Crista Lopes, aÂ professor of informatics at the University of California, Irvine, sent an email to the OpenSim developers mailing list.

“I started working on an extension to OpenSim that makes it work in peer-to-peer mode… I’m really excited to say that this is working!” she wrote.

The email went on to detail some behind-the-scenes details of how the hypergrid was implemented, and where folks could download the code and try it out.

By the spring of 2009, several major grids were hypergrid-enabled, including OSGrid.

By November of that year, of the 33 known public OpenSim grids, 22 were hypergrid-enabled.

By November of 2010, there were 60 public grids, of which about half were hypergrid enabled. I use the word “about” because some grids turn hypergrid on and off, while others allow only outbound hypergrid teleports but not inbound ones, so it can be hard to tell which ones are hypergrid-enabled and which aren’t.

By November of 2011, there were 90 public grids, of which 51 were hypergrid-enabled.

Today, there are more than 300Â active grids, of which 222Â are hypergrid-enabled. 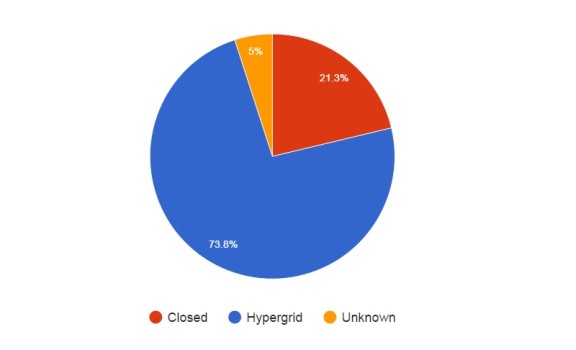 When the hypergrid was first invented sevenÂ Â years ago, it was missing several key functions we take for granted today.

For example, users could not access their inventories after they teleported to a new grid.

Today, not only can hypergrid travelers access their inventories and even buy stuff on foreign grids, they can also make friends on other grids and send messages to them, save hypergrid landmarks, and create groups with members from many grids.

There is also a multi-grid marketplace, the Kitely Market, which delivers to more than 100 different grids.

In addition, more and more event organizers are promoting to the entire hypergrid, as this week’s dozen-plus Halloween events amply demonstrate.